Although we don’t typically celebrate Halloween in France, Halloween is getting more and more popular among children and young adults.

So if they do, how do French people celebrate Halloween in France? And what’s the French Halloween vocabulary? How do you say trick or treat in French? I’ll answer all these questions in this article.

How do you say “Trick or Treat” in French?

The whole point being to have French kids use a few English words… But a good translation would be in French:

I’ve heard this is what they mostly use in French speaking Canada. Now let’s see how to talk about Halloween in French.

You may also be interested in my free lesson about the French fear vocabulary.

And now let’s tackle THE question: is Halloween celebrated in France?

Do You Celebrate Halloween in France?

In the 1990s, young French hipsters started to have costume parties for Halloween, and some bars and restaurants took up the trend as well… To this day however, Halloween is still mostly a commercial celebration, and something for kids… and English teachers!

Halloween is not a typical French holiday but stores try to take advantage of it, and it’s not unusual to find a “carve your Halloween pumpkin (“une citrouille” or “un potiron”) display at your local grocery store.

Well, pumpkins don’t sell like hotcakes in France, so I guess everything is good to try to sell them… But I don’t know that French people are massively carving pumpkins or doing anything special for Halloween…

With English being studied in elementary school, kids usually know about Halloween. There are many fun activities that can be done on the Halloween theme, and candies are sufficient motivation for any kid in the world!

No Tricks on Halloween in France

Although some neighborhoods are more responsive than others, trick-or-treating is not yet part of the French tradition, and people have mixed reactions to being “disturbed’ at nightfall for candies by kids in costumes.

Note however the “trick” part is out of the question in France… That part of the tradition didn’t make it (yet ?) and French folks have not had the pleasure to receive eggs or toilets paper over their fences, trees, house… 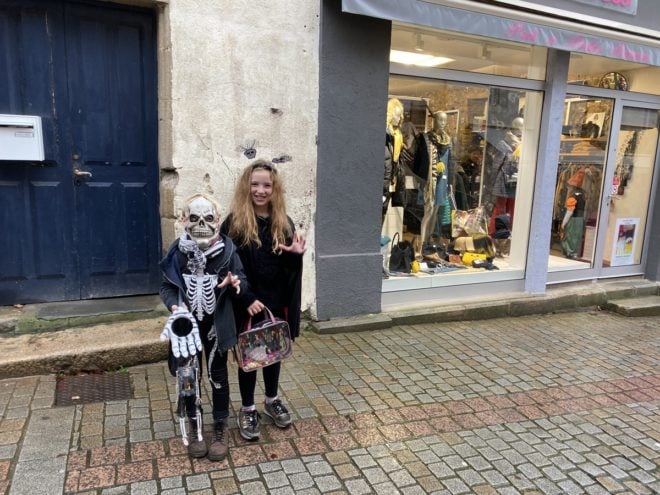 Only Scary Costumes for Halloween in France

French kids don’t seem to be aware that you don’t have to necessarily dress scary for Halloween. No lovely princesses or fairies on Halloween in France. Only ghosts zombies and vampires. Maybe that’s why some French people don’t like it.

French people typically love costume parties, they are very popular for New Year’s Eve or birthdays, even among grown-ups.

Halloween is Still a Foreign Holiday in France

If Halloween is a big hit in larger cities which often organise parades etc… It’s still a “foreign” holiday in smaller countryside villages. Most French people won’t have candies handy, and houses are not usually decorated for Halloween.

We live in a small 8000 inhabitant town called “Paimpol”, in a very quiet residential street. No trick or treaters for us, although Paimpol’s shopkeeper usually organizes something for kids in the town center in the afternoon of Halloween, and local businesses give away candies.

Since kids didn’t come to my house, in 2019, I went to look for them in my neighbourhood. I crossed path with 2 groups of 4 kids. I asked them why they were wearing costumes and, they answer “because of the candies”. When I asked “do you know what day is today”, I got one ” because it’s Halloween” out of the 8 kids…

When I asked them if they knew how to say “trick or treat” in English or French… they didn’t know nor the words, nor the tradition… Just that they were likely to get candies today!

The 2019 parade in the middle of town was a big hit though. It was held from 4 to 5 PM, and many kids and parents showed up. The shops were not particularly decorated… And the costumes were more or less creative: sometimes just a mask, hat or wig thrown over regular clothings.

Halloween is Getting mix Reactions From French Folks

In the small countryside village where my parents live, the school teacher is serious about teaching English, and loves the opportunity Halloween provides to motivate kids.

All the kids meet up at the school and then go trick-or treating, and guess what? My parent’s house is right in front of the school. It’s the one house all the kids are sure to hit!!! 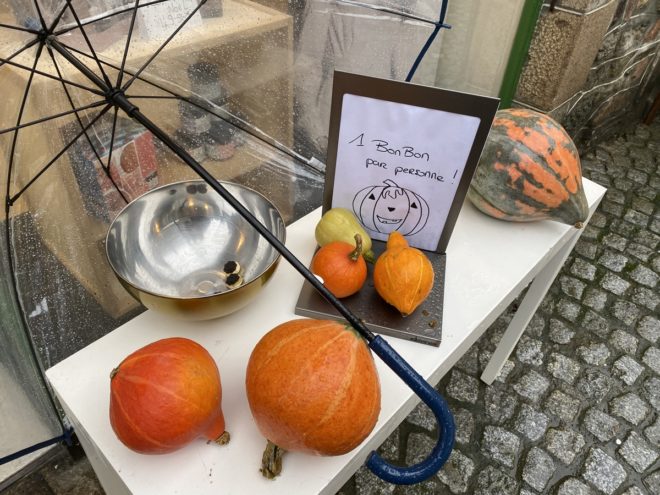 It’s too bad though, because on November 1st is the Catholic Holiday of “la Toussaint” (All Saints Day), when French people traditionally visit cemeteries, freshen up the tomb displays, bringing colourful mums (“des chrysanthèmes” chrysanthemums, aka mums)… symbol of death, never to be given as a bouquet/present… that would be a big faux-pas !!) and pray to their dead and their favorite saints.

La Toussaint, November 1st is a holiday in France: everything is closed. It’s in the middle of the school vacation “les vacances de la Toussaint” so kids are around. Families often gather together for a meal, and bring flowers to the cemetery (le cimetière).

If you know French people who suffered the loss of a love one, this is a good time to send your sympathy in French.

These are the same ideas that are at the very heart of Halloween. I feel Halloween could be a great way to get younger people to carry on ancient French traditions that are getting forgotten, while also integrating a fun American celebration.

In 2019, I went in the streets of Paimpol to so you could see a bit the “ambiance” of Halloween in my small countryside town of Brittany.

It was raining that day, pretty hard. And the shopkeepers organisation had decided to celebrate Halloween on October 30th? Why??? I’m not sure: probably because it was on a Wednesday when kids have no school (but the shopkeepers had forgotten that it was during the French school holidays anyway… Typical French LOL).

You may turn on/off French/English subtitles by playing with the CC option located to the bottom right of the video.

I hope you enjoyed my video.

What about you? Are you celebrating Halloween this year? What will your Halloween costume be? Do you celebrate Halloween in your country – if not, any other celebration about death?