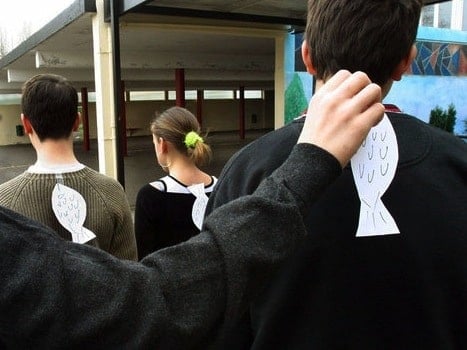 A “poisson d’avril” is a joke made on April 1st. For April Fool’s in France, children try to stick a fish picture on their friends’ back. When the joke is discovered, they shout “poisson d’avril !”. Learn about this French tradition, with many examples, and study the laughter related French Vocabulary.

The typical French April Fool’s prank consist of discreetly attaching a paper fish to the back of your unknowing victim… But all kinds of pranks are possible on that day: when the prank is revealed, we shout: “poisson d’avril”!!!

Where this habit comes from is not certain. There are several theories (read more here), but why the symbolic of the fish remains pretty much a mystery.

For a taste of French jokes, follow this link to French jokes + English translation and audio recordings on French Today.

We have a series of French words for tricks, pranks and practical Jokes

B – French Vocabulary for Verbal Jokes

For verbal jokes, the French vocabulary we use differs a bit:

Note the expression “sans blague” which means “no way… no kidding!”
Tu as gagné au loto ? Sans blague! You won the lottery? No kidding!

The verb is important because it will set the context of the joke:

We also have a series of specific verbs to say to joke, kid around:

Grown ups like to make jokes as well, announce fake info : it’s very common that jokes are also made by the media, radio, TV etc…

See what the RATP (the company managing the Paris Subway) did in 2017: they made puns with Paris métro station names! They glued some stickers around the names on the stations themselves.

I’ll translate and explain them for you: all these are French puns, so the name of the station sounds more or like another French word and together makes a fun sentence.

Why are some words omitted such as the “il n'” or the “ne” – that’s modern French!

BREAKING NEWS! President François Hollande is to change his last name. “I’ve had enough of the confusion created by my last name” said France’s president to a TF1 reporter. The president has not yet disclosed his chosen last name, but rumor has it that he may choose “de France”, since “de Gaulle” has already been used…

Yesterday, President Nicolas Sarkozy announced an ambitious plan for mitigating the social health deficit: to sell the Parisian monuments, which presently belong to the city of Paris.
Many foreign powers have already made offers totalling several billion Euros. It seems that China is willing to pay 3 billion Euros for the Eiffel Tower alone.

The other monuments concerned are the Arc de Triomphe, the Petit Palais, the Sorbonne, the Paris Bourse, the Invalides, Grand Palais … and the bridges of the Seine.

The President said that Notre Dame cathedral as well as the Basilica of the Sacred Heart would be excluded from the negotiations because of their religious character.

“It is out of the question to move these monuments symbolic of the city of Paris, only to cede their title and their visa operation to make a profit that could solve the French economic crisis. “

Brought to comment on this exceptional measure, Carla Bruni cried out “Long live the April fools. “

Here is an hilarious “poisson d’avril” video of a fish pranking a cat ! And it comes with English subtitles :-) Note the song at the end which is a very famous children song.

If you enjoy learning French in context, check out my downloadable French audiobooks: my bilingual novels are recorded at different speeds and enunciation, and focus on today’s modern glided pronunciation. My French audiobooks are exclusively available on French Today. 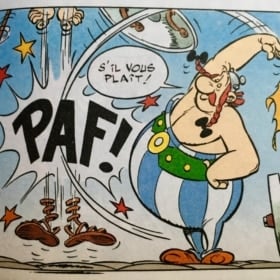