As a Paris native, I feel the pain of foreigners painfully dragging their oversize suitcase over the zillion steps of the Paris subway stations…

For sure, they read “le métro” was the cheapest, fastest way to move around in Paris. And it’s often true! But you need to be a minimum “métro” savvy!

Let’s start by going over the French subway vocabulary.

And now, here are my tips to ride the Paris subway like a Parisian.

2 – Move Away From the Subway Doors, Would you Please?

On busy Paris subway lines such as “la ligne treize“, it’s important that during rush hour (Monday through Friday, roughly between 7:30 and 9:00 AM and 5:00 and 6:00 PM) , you follow the métro untold politeness code… Or common sense…

3 – Stand During Rush Hour In the Paris Subway

The little foldable seats located by the doors of the train car are called “un strapontin”.

It’s common French politeness to stand when there are many other people standing in the entrance of the train.

4 – Do Give Up Your Seat In the Paris Subway

Whether you are sitting on “un strapontin” or in the designated sitting area, earn some “good tourists” points by offering your seat to an elderly person, someone traveling with an infant, or a pregnant woman.

Say “vous voulez vous asseoir ?” (would you like to seat) with a smile, and you’ll notice a vibe of appreciation coming from all your fellow passengers. You may even get a nod or a smile out of them.

If you are an elderly person or pregnant yourself, don’t hesitate to ask for a seat: “je peux m’asseoir s’il vous plait ?” (please may I sit down?). It’s common practice, and people should offer their seats gracefully… A courtesy that may need a friendly reminder (especially when the commuter is conveniently staring at his/her smartphone…)

Would you like to learn all this vocabulary and tips within the context of a realistic level-adapted French novel. My French audiobooks feature lively French stories recorded at 2 levels of enunciation: enunciated and modern spoken French.

Always keep your valid ticket with you until after you exit the Paris underground train network (don’t throw it in the trash as you’ve just exit your subway car).

There are frequent controls in the corridors, or by the exit (not just within the métro car) and if you don’t have a valid “ticket de métro”, you will be fined!

Think twice before riding the Paris métro with a large suitcase or a bulky strollers. The Paris subway is mostly underground. Sometimes, such as for the métro line number 2, part of it is on bridges, overhead.

A few stations do have elevators, but most don’t.

In a lot of stations, you do have a side gate with a button you can buzz, and a clerc should let you in. If you have to do this, first put your ticket through the ticket machine at the gate so you have a valid stamped ticket. Then go through the gate…

If there is no such gate, I suggest pushing the said suitcase or stroller before you, and following fast: the ticket gate should stay open long enough for you to go through! (Pray it does…)

Honestly, don’t take the subway with a large suitcase, especially when it’s not a direct route… No self respecting Parisian would! Check the bus routes, or splurge for a Parisian taxi or an Uber!

7 – Think Twice Before Making a Connection In the Paris Subway

I’ve counted many fifteen minute (of fast walking) connections in the Paris subway… Thank goodness I was not hauling a suitcase!

Sometimes, they are very fast. Sometimes, you’ll be better off walking in the street, and enjoying the “fresh” air of Paris and the view, rather than making a long connection underground for only one or two stops… It doesn’t show on the map so… you have to know the Paris subway system to know the length of the connection. 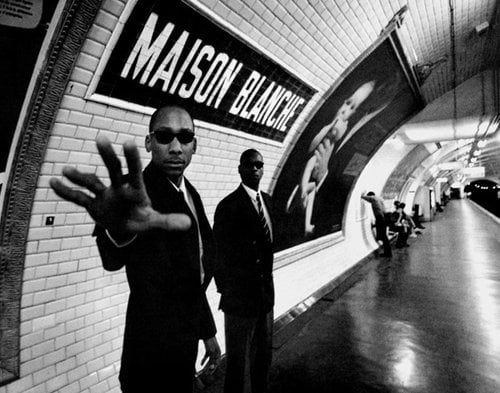 Surprise! The black strip on the ticket is magnetised: being in contact with coins may de-magnetise the ticket, and the machine at the métro entrance will refuse it. So you shouldn’t keep your subway ticket in your wallet… How practical!

If this happens to you, and fortunately, you are at an entrance with a clerc, cut the line (how French) and just hand your ticket to the clerc…

You don’t really need to say anything, since this happens a lot, the clerc should understand and simply hand you another ticket… Just in case, say something like: “excusez-moi, mais mon ticket ne marche pas” (sorry, but my ticket doesn’t work).

9 – No Need For Another Ticket When You are Changing Direction

The Paris métro stations are announced by a loud speaker, and there are also maps on the walls where you can check your itinerary. Some are electric and you will see the next stations lit-up. It’s always a good idea to check with the map that you are actually going in the right direction!

If you are not, no panic!

Just get off at the next stop, and follow the sign showing the first station name of the direction you need to go to. No need to buy a new métro ticket, you can change direction, and make multiple connections with the same ticket.

Your ticket is valid until you go through the subway exit doors.

Mind your belongings in the Paris subway. Unfortunately, there are many pickpockets, and they are extremely good at getting to your wallet, even if it’s in your front pocket or in your purse….

So wear your backpack on the front, on your torso, carry a purse which zips and keep you arm over it at all times. Better yet, wear a money belt (it’s not super trendy but it’s safe).

Be also careful with your smartphone. Unfortunately, thieves are now grabbing fancy smartphones and running away. So only look at your smartphone is “secure” situations, when you can hold it with both hands – not as your are climbing down the stairs…

Getting through the subway doors if you have many luggages is going to be a challenge. Be aware that you are particularly vulnerable at that point. There is usually a buzzer which opens a gate on the side to enter the subway when you have cumbersome luggages or a stroller.

There are many scams in the Paris subway: in particular, people dressed like subway employees who claim they will help you get your ticket. They’ll take your cash and give you a free child ticket, or anything but what you’ve paid for.

There are also real employees who are actually there to help tourists out… So not everything is a scam either! Something is clear: unless the person is at a booth behind a glass door, you should not hand them any cash. A legit employee will show you how to work the ticket machines: they may press the buttons for you, but you will be the one inserting cash or card into the machine.

There are also a lots of beggars in the Paris métro. Some will be in the corridors, some will board the cars, briefly shout out their sad life story and predicament, and then go through the car and ask for money.

Some people asking for money are artists, musicians: they’ll play something and then ask for money: enjoy, they are often excellent!

Whether you give money is up to you. I always give something to a good musician, but you certainly don’t have to.

Watch out though: giving some change out of your pocket is not a problem. Getting your wallet out and showing bank bills could put you at risk. So… if you plan on being generous, keep some change in your pocket before you get in the subway!

Be aware of your surroundings. If you look aware, you are less likely to become the target of pickpockets. Unfortunately, this is also a question of pure (bad) luck!

11 – The Ugliness & Beauty of the Paris Subway

Yes, you’ve heard many stories and I’ve just warned you… There are indeed many pickpockets, beggars etc… riding the Paris métro. But there is a large majority of normal, decent people. So, if you are in trouble, say so!

If you are lost, do ask for help: go straight to the point so people understand that you are not asking for money. SPEAK LOUD ENOUGH and say: “Ligne 1 – la Défense : c’est par là ? Je suis perdu, excusez-moi !” for example (Line one – La Défense: is it this way? I’m lost, so sorry). So start with the most important part of your message, be direct then you can be polite and apologize…

The Paris subway is a tough environment. However, you will witness acts of candor for your fellow passengers: helping someone with a stroller down the stairs, giving up their seat for an older person… You do need to be aware of what could possibly go wrong, and you will see sad things such as homeless people catching a bit of a sleep in a station during the cold winter… You will smell pee and may catch glimpse of a rat or two (look on the rails…).

But you should also admire the beauty of some exceptional métro stations, enjoy the talent of incredible musicians, and see the kind gestures happening discreetly, but surely, all around you.

Before we move on to the Paris subway stations audio recording, and just for the pleasure of it, I’ll direct you to a photo gallery of Paris métro station pun photographs by Janol Apin (author of the main picture of this article). It’s quite fun!

12 – Learn the Pronunciation of the Paris Subway Stations

Please note the Paris subway is always expanding, especially the newer lines. The name of the métro stops may also change: subway stations get renamed.

So there may be a few variations from the latest Paris subway plan, but I believe my recordings will cover the large majority of the Paris subway stations, and you will hear the correct French pronunciation.

Click on the audio link to play the audio recording of the Paris métro stations.

Click on the audio bar to play the audio recording of the Paris métro stations for line number 2.

Please, click on the audio bar to play the audio recording of the Paris métro stations of line number 3 and 3bis.

Click on the audio bar to play the audio recording of the Paris métro stations for line number four.

Click on the audio bar to play the audio recording of the Paris métro stations for line number five.

This line recently extended and the audio missing a couple of stations – sorry!

Good luck with your trip to France!