French letters lock together to create specific French sounds: understand this and you will not only be able to read French with ease, but gain confidence with your general French pronunciation.

First, I’ll record the different sounds that you will find in the French language, starting with the vowels and then the consonant sounds, and illustrate the sounds with examples in the form of a fun sentence. I’ll then focus on some challenging French sounds like the French U and the French R, explain the concept of liaison, and finally, I’ll give you pointers on how to improve your spoken French pronunciation.

This free lesson comes with audio recordings made by a French Parisian native (yours truly). Click on the link next to the 🎧 headphones to play the audio of the sounds and many examples.

In any language, written letters combine to make sounds. Sometimes it’s rather logical – like the word “dog” in English – sometimes much less, like the name “Sean” which is pronounced like [Shon]…

First you may want to start by learning the French Alphabet.

Please press on the audio player to hear my recording of the French alphabet. I left just enough time for you to repeat out loud.

Now, the alphabet states the names of the letters. Not necessarily their pronunciation. Written letters combine together to make sounds. Let’s see how!

Let’s start with the most important French sounds : the French vowels.

These vowels with often combine with other vowels to spell out different French sounds.

Here is a recap, however, to get a deeper understanding of how each individual vowel is pronounced in French, I suggest you follow this link to my free audio lesson on French vowel pronunciation.

I got really creative with my examples: I created full sentences loaded with the sound I wanted to illustrate. Use the audio to repeat them out loud! It’s a great way to exercise your French pronunciation and create reflexes!

You know a French teacher? Please share this lesson with him/her. I’m quite sure they too will find it useful!

How To Pronunce the French U Sound?

The French “u” sound often eludes students of French. It’s often described as closed to the English “oo” sound, but in reality, it’s much closer to the English “ee” sound.

Start by making a French i sound, so like “tea”, “fee” or simply “me” in English.
Then don’t move anything inside your mouth. But push your lips way out as a kiss, and then curl them up a bit as if you wanted to touch your nose.

Here is what you should be hearing. Ti—-iiiii-uuuuuuu

I find that it’s a huge help to start with the I sound and try to find the U as you’re saying the I.

Another way to find the U sound is to find a word you can pronounce. Many English speakers know how to say “tu” (you in French). So use this “tu” as a tuning fork.

Now let’s move to the next group of French sounds: consonants.

What are French Nasal Sounds?

The French could have used some kind of accent to indicate a nasal sound. Like ã ĩ õ… It would have made things so much simpler! Instead, we write a nasal sound in French with a vowel followed by an N or an M.

When To Pronounce N or M or a Nasal Sound?

A vowel can lock into a nasal pronunciation with a vowel + N or M is used:

Is locked in by a consonant – at the beginning, in the middle or at the end of a word
Ex: oncle (uncle) , ample, ombre (shade), orange, bonjour (hello), ambulance, ont (they have)

In other words a vowel would unlock the nasal combo.
Un = nasal
Une = not nasal because of the e.

How do you make a French nasal sound?

A nasal pronunciation has to do with the air flow at the back of your mouth. Many people can just find the sound by mimicking the audio. If it’s not the case for you, I have several precise solutions to unlock this French sound: I invite you to follow this link to my free audio lesson about French nasal sounds – with many examples.

Now let’s move on to other French consonants.

Now play the audio recordings and remember to repeat out loud – not just in your head!

Now, let me help you help you with the French R.

How To Pronounce A Perfect French R

All it takes is 3 simple steps:

Your tongue is going to make like a curvy slide as you can see on the exaggerated picture I drew to illustrate this lesson. More tips and audio practice in my free audio lesson on how to pronounce the French R sound. 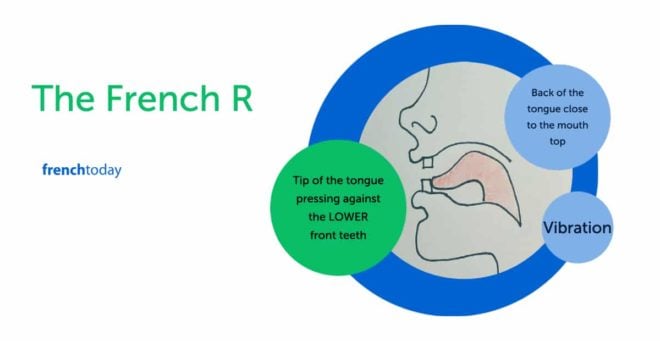 What Are Liaisons in French Pronunciation?

“Une liaison” in French pronunciation is the fact that the final written consonant of a word becomes the first sound of the following word.

That sound may be the sound of the written consonant, or change slightly.

Ils ont
The final S of “ils” is totally silent.
“I-L-S” in French will never be pronounced [ils] nor [ilz]
However, the final silent S of “ils” will affect the following word, the “ont” in liaison.
“Ont” (pronounced [on]) will be started by the S of the “ils”, which becomes a Z sound in liaison.
So in pronunciation, “ils ont” is pronounced [il zon]

Let me provide some examples with audio recordings.

There is a lot to say about French liaison, more than I can include in this general guide about French pronunciation. Yet – you guessed it – I have already published a free lesson with audio, exclusively available on French Today’s blog! Learn everything there is to know about French liaisons with 100 examples and audio recordings.

Now that I’ve laid down the basics of French pronunciation for you, let me answer a critical question: how do you sound more French?

How to sound French?

In this free lesson, you learned the major French sounds.

If you have a great ear mouth coordination, you may be able to mimic my audio recordings and learn French pronunciation that way.

In my downloadable audio lesson Secrets of French Pronunciation, exclusively available on this website, I explain thoroughly how to place your mouth, lips, tongue to produce the different French sounds, explain all the pronunciation rules and provide many examples with audio recordings and audio drills. The whole lesson is logically structured to help you progressively build up your understanding of French pronunciation. And for many students, this lesson made a huge difference.

Yet, to really improve your French pronunciation, the key is to repeat whole sentences. So you get not only the individual sounds, but also develop an ear for how they all flow together, and get the music of the French language. I suggest you check out my French audiobooks, recorded at several levels of enunciation to help you master both traditional and modern spoken French pronunciation.

You may be interested in this other article about how to improve your French accent. As a matter of fact, a whole section of this French Today blog is dedicated to French pronunciation. Check it out!