Learning French, like any other new language, implies a lot of memorization, and often, as adults, our memory is not what it used to be. So what is the best way to learn French? These 12 tips will help you memorize new information longer, and learn French more efficiently.

Table of Contents
12. Always Study French with Reliable Audio
11. Be Aware of your Own Learning Style
10. Self Studying is NOT for Everybody
9. Beware of Free French learning tools
8. Translate French Into English as Little as Possible
7. Link French to Images and Visual Situations, not English words
6. Be Careful With French Cognates
5. Avoid Writing in Your Head
4. Learn French in Sentences
3. Prioritize
2. Study French Regularly, for a Short Time, not all in one Sitting
1. Review – Repetition is the Key!

There are many silent letters, glidings, liaisons, etc… and they are everywhere, including in French verb conjugations and grammar.

Many students are still learning French mostly with written material, or traditional methods that over enunciate every single word. Even worse! There are now apps with computer generated French voices (stay away from these!)

Formal school curriculum usually focus on grammar and verb conjugations – the teachers don’t have a choice: they have to cover the imposed curriculum, and that leaves little time for anything else!

Yet, if you want to learn French to communicate in French, not just to pass exams, you need to train to understand modern spoken French. I wrote a whole article about modern spoken French with many examples, so I invite you to read it should you like to know more.

For example, the modern spoken pronunciation of “être” various conjugations is quite different than what you may have studied… Especially in the negative, when you apply all the glidings with the subject pronouns and the ne…. Check out my free audio guide about the French verb être conjugations and pronunciation.

“The spoken French taught in American classrooms is a fiction, based on ideas about how people should speak, not on how they do speak” – Waught & Fonseca-Greber University of ArizonaClick to Tweet

Picking the right French audiobook is your first challenge; and from your choice may very well depend the success or failure of your French studies.

Now let’s talk about your own study style.

11. Be Aware of your Own Learning Style

Whatever the method you are using to learn French, make sure you adapt it to YOUR learning style.

This being said, studying French with audio is a must if you want to learn French to communicate: understand modern spoken French and speak French yourself.

I developed an audio-based modern French placement test. Check it out to see if you can understand modern spoken French.

10. Self Studying is NOT for Everybody

When it comes to learning languages, not everybody is the same. I’ve taught hundreds of students, and I can tell you from experience that some people have an easier time with languages than others. It’s not fair, and it’s not popular to say it… but it’s true.

It doesn’t mean that someone less gifted cannot learn French, but it means that self-studying is not for everybody.

Some students need the expertise of a teacher to guide them through their studies, motivate them and find creative ways to explain the same point until it is understood. Skype and/or phone French lessons can be a good solution.

However if the material is not good, then ‘free’ can be a total waste of your time. And your time is valuable.

Be particularly careful about social networks. It’s easy to get lost in there, and jump from one funny video to another but at the end, actually learn very little – or not what you should be learning!

There is also some really good free material out there – if you have not done it already, I encourage you download my free French learning audiobook.

However, if you are serious about learning French, you need to follow a structured path which gently leads you through the different French learning stages. At one point I suggest you invest into a reliable French learning method.

The method you choose has to come with solid grammatical explanations – very few people can master French without first understanding French grammar – and audio recordings featuring both traditional and modern French.

8. Translate French Into English as Little as Possible

When you are a total beginner, some translation is going to occur. As you advance in your French studies, try as much as possible to avoid translating.

Translating adds a huge step in the process of speaking:

It makes your brain waste 30% more time and energy and will fool you into making a mistake when the literal translation doesn’t work – which is unfortunately often the case in French!

So if you don’t translate, what should you do?

7. Link French to Images and Visual Situations, not English words

Try as much as possible to link the new French vocabulary to images, situations, feelings and NOT to English words.

When you learn the French expression “j’ai froid”, picture being cold, bring up the feeling, and link the French words to this sensation, not to the English translation.Click to Tweet

By linking the image/ sensation to the French words, you will avoid mistakes since in this particular case for example, we don’t use “I am’ in French, but ‘I have’: “j’ai froid”…

Whatever you do, don’t adapt the English sentence to adapt it to the French – “ah, Ok, the French say “I HAVE cold”… I’ll remember that!”

Let’s see what this does for your brain:

It is MUCH simpler and faster to link the feeling of cold or “brrrr” to “j’ai froid”.

If you are doing flashcards to study French – which I strongly encourage you do – draw the word/situation whenever possible instead of writing English. Even if you are not a good artist, you’ll (hopefully?) remember what your drawing meant, and it’s much more efficient to learn French this way.

This is a very important point so I’ll take another example.

When learning French numbers, many students “build” them. They do maths. When they want to say ‘ninety-nine’ in French they think about what they’ve learned and remember this fun (or crazy?) logic ‘four-twenty-ten-nine’ and finally come up with “quatre-vingt-dix-neuf’.

Do you realise the time wasted?
Most French kids know how to count to 99 by age 6.
Nobody ever told them about the ‘four-twenty-ten-nine’ nonsense! The only think they know is that 99 sounds like [katrevindizneuf].
They don’t know how to spell it – and they don’t care!

Well, that’s how you need to learn French. Not like a kid – adults don’t learn like children. But by linking the French sounds to the notions, the images, the ideas. Not to the English words. Not to the logic. Not even to the grammar.

6. Be Careful With French Cognates

This is exactly why you should be particularly careful with cognates – words that are the same between the two languages.

Many students approach them thinking “ah, that’s easy, I know that one”. But then when they need to use that word, they don’t remember it’s the same word in French as in English…

Furthermore, cognates always have a different pronunciation, and your English brain is going to fight saying that word the French way.

I hear many students having a hard time with the word “chocolat”. In French, the ch is soft, as in “shave”, and the final t is silent. [Shocola]. Most French students wrongfully pronounce it [tshocolat].

Finally, there are many false cognates: words that exist in both languages but don’t have exactly the same meanings (like entrée in US English (= main course) and entrée in French (= appetizers, first (light) course).

So, cognates need more of your attention, not less!

5. Avoid Writing in Your Head

Many students “write” French in their head before they speak.

However in French, may letters are silent, like the “ent” of the “ils” form, or the é sound at the end of a verb: parler, parlez, parlé, parlée, parlés, parlées.

Writing in your head a huge waste of time and may lead to being scared to speak French. When you learn French with audio recordings, then words, full sentences and even verb conjugations will come naturally to you: you will hear them in French in your head. 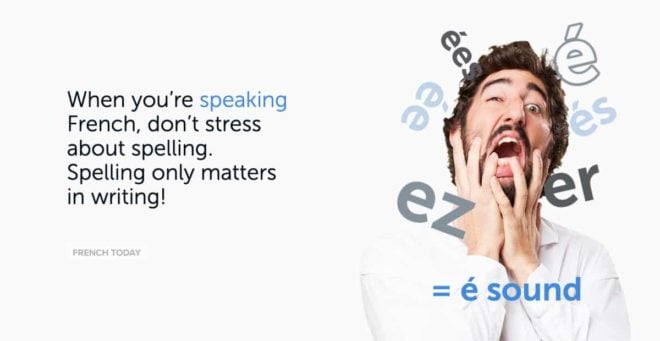 When you learn French in sentences, as in the context of a story in French, you’ll remember the situation and words longer, and you’ll already have a series of words that go well together handy for your next French conversation!

To learn French in context, I highly recommend you check out my unique downloadable French audiobooks, a unique French learning method illustrated by a realistic bilingual novel recorded at different levels of enunciation, featuring both traditional and modern spoken French pronunciation.

When you make up your French sentences, find examples that make sense to you, that are close to your own life.

For example, let’s say you want to learn ‘red’ in French. Instead of writing down a dull sentence like ‘the apple is red’, look for something red that personally means something to you, and write about it: ‘my dog likes to play with his red ball’.

Often, to make learning more fun, many teachers try to present a text, a story. At least I do, as much as possible.

If your memory is great, go ahead and memorize everything!

But if it’s not the case, PRIORITIZE: what words in this story are YOU likely to use? Focus on learning these first, then revisit the story once you’ve mastered your first list.

The same logic applies to tenses: in conversation, most of the time we use the present indicative. So focus on the present when studying your French verb conjugations, and then move on to adjectives, essential vocabulary, asking questions, pronouns… things that will make an immediate difference in your ability to converse in French.

The French subjunctive can wait!

2. Study French Regularly, for a Short Time, not all in one Sitting

If you study French all afternoon,  chances are that you’ll exhaust yourself, and are much more likely to get frustrated, lose your motivation or attention.

Spending 15-30 minutes a day learning French – not multitasking but with 100% of your attention – will get you better results than two hours during the weekend with the kids playing in the background.

1. Review – Repetition is the Key!

This is probably the number one mistake students make.

They concentrate on learning new material, and forget to review the older one.

Rule of thumb: for each hour spending learning new French vocabulary or conjugation, you need to spend minimum one hour reviewing older French material. Repetition is the key!Click to Tweet