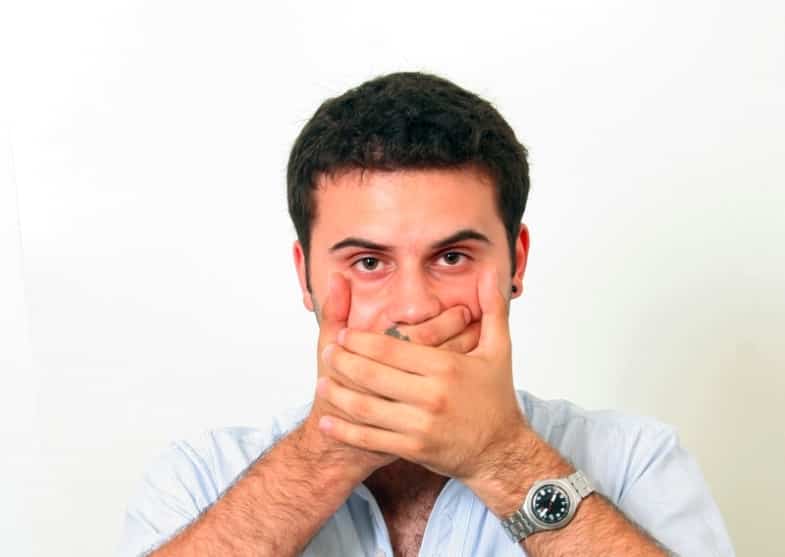 “I’m afraid to speak French”. “When I open my mouth, words just don’t come out”. “I feel stupid when I speak French”. Sounds familiar? Rest assured, you are not alone, and there are ways to get over your speaking anxiety: follow my tips!

Table of Contents
1 – You Can’t Show Your Wit in French (Yet) = Simplify!
2 – Don’t Write French in Your Head
3 – Drill on French Sentences You Know You Will Use.
4 – Drill on Difficult French Sounds
5 – Find Synonyms for Difficult French Words
6 – Breathing – Your Ally Against Fear
7 – Slowing Down – Your Ally Against Freezing
8 – Speak Up And Have a Positive Attitude
9 – Take the Plunge and Speak in French
10 – Practice Speaking French Regularly With a Human Being
Getting Over Speaking Anxiety in French – Summary

This has to be my first tip. I’ve been teaching French to adults for over 20 years now. Many of my students are intelligent, educated people who skillfully choose their words when they speak English.

To them, the English language is more than a way to communicate, it’s a way to show their wit, their humor, to represent their better self and their social status.

So, when they speak French, they want to do the same thing and therefore form complicated sentences, because they are scared of sounding stupid. And of course, they hesitate a lot, or run into difficult constructions such as using the French Subjunctive and make mistakes.

When you learn a foreign language, you need to accept that your first goal is to communicate: simplify your sentences, as if you were speaking to a four year old child. Just get your point across without wit and without form. That’s already a great achievement!

2 – Don’t Write French in Your Head

There is a huge difference between written French and spoken French. I encourage you to write my article about modern spoken French, which has many examples. 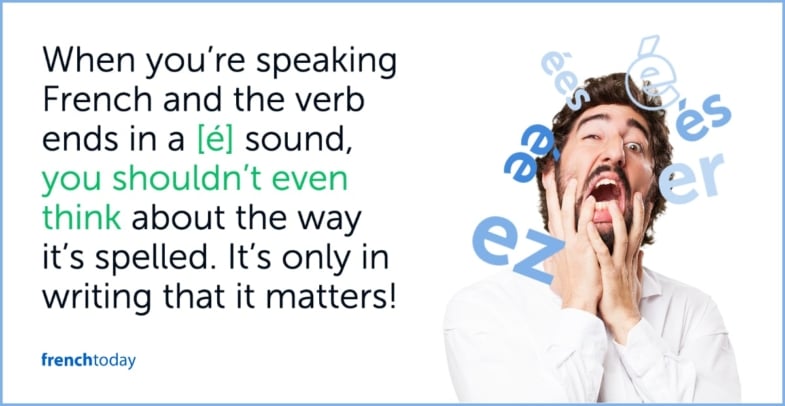 3 – Drill on French Sentences You Know You Will Use.

If you are a coffee drinker and are traveling to France, this may come in handy. Or maybe you prefer tea ? “Je voudrais un thé s’il-vous-plaît”.

French pronunciation is not going to sink in unless you make it. Some sounds such as “r” or “u≠ou” or “é≠è” or the infamous “ouille, euille, aille” are particularly difficult for English speakers.

My audio lesson Secrets of French pronunciation has a special drill section for these sounds. Repeat, drill, get them right: being confident about your pronunciation will be a huge help to get over speaking anxiety.

Why say “chirurgie” when you can say “opération”?

Some words will always be a challenge. Either you embrace the challenge, drill on the word and feel proud each time you get it right, or you can just use a synonym.

I do that myself when I speak English: I would never use the word “hassle” in English: way too dangerous for a French person who tends to not say the “h”… I use “pain” instead.

6 – Breathing – Your Ally Against Fear

Sound rides on air. If you don’t breathe, your voice will have nothing to “ride” on, and will sound shaky, or you’ll stutter.

Breathing in will calm you down.

Furthermore, breathing in at a logical part of your sentence (where you’d use punctuation in writing) will give you more time to think and form your sentences. Which brings me to my next point.

7 – Slowing Down – Your Ally Against Freezing

If you speak fast, your interlocutor will speak fast as well, and chances are you won’t understand, and freeze.

The best way to have someone slow down is to actually slow down yourself (you may also need to say: “parlez un peu moins vite s’il vous plaît” – speak less fast/slower please).

French people are notorious for speaking fast among themselves, but speaking slowly is not a problem in French as long as you pause in places that make sense. Hence the importance of “grouping” your words in a logical manner in your sentence.

It’s part of French pronunciation: grouping words that are logically related, and knowing where you can pause, where you should pause, and for how long. To master this, it’s essential to train with audio and develop an ear for this grouping – you can do so with my French audiobooks: recorded as several speeds and levels of enunciation, French Today’s audiobooks will help you master both traditional and modern spoken French.

8 – Speak Up And Have a Positive Attitude

Please speak up. Speaking with a low voice won’t make a mistake less of a mistake. It’s just going to make it even harder on your interlocutor.

Speaking up will also make you feel more confident: when you speak too low, you are in a submissive attitude, and that won’t help you to get over your fear of speaking.

Same goes for smiling. Students are scared, so they frown. They concentrate, so they look intense. It doesn’t send out a good vibe!

Try to relax, breathe, smile – even if it doesn’t come naturally, you need to play the part and be aware of your physical attitude when you speak a foreign language. Look at the person in the eye, don’t look “into your brain” (up and to the right) for the whole conversation :-)

When you do open up to the other person, you will get their physical messages as well: their smile will encourage you, their eyes will show you they are interested in what you are saying. It will make the whole interaction so much more human and pleasant.

9 – Take the Plunge and Speak in French

Yes, speaking in French is scary. As I explained above, language is much more than a way to communicate: it’s part of who we are. So is our voice, our laugh…

So, when you speak French, you are losing a part of your identity. It’s hard to accept to sound shy when you are not, silly when you are quite intelligent, humorless when you are the king of jokes in your native language… It’s a very humbling experience, and all foreign language speakers go through it. And we all survive.

What’s really hard is to take the plunge. Start to speak French, do say these first few words.

Sometimes, it may be easier to speak English, and it’s OK too. Each time you do take the plunge and speak French, you should feel proud, and pat yourself on the back. And if you are too scared, then there is always next time.

Know however that the more you practice, the easier it will be to take the plunge. Like with everything else, fear is conquered by confronting it over and over, until it’s not scary anymore.

10 – Practice Speaking French Regularly With a Human Being

I produce French audiobooks, and they are a great way to learn French, and provide a lot of French practice. But nothing, absolutely nothing will replace human interactions when it comes to languages.

So, in order to get over your fear of speaking French, you need to practice. Grab any opportunity: a few words in a French restaurant, or with a French acquaintance (with caution – read my article on why you may not want to speak French with your French friends), or better yet, plan a “studycation” and plan an trip to France in immersion at a French teacher’s house or take French Skype lessons.

Getting Over Speaking Anxiety in French – Summary

And most of all, feel proud of yourself. You worked hard to come this far, and the French may not realise it, but you should. Let’s see how they manage to speak English! So have fun and savour the fruits of your hard work.

I suggest you also read my articles