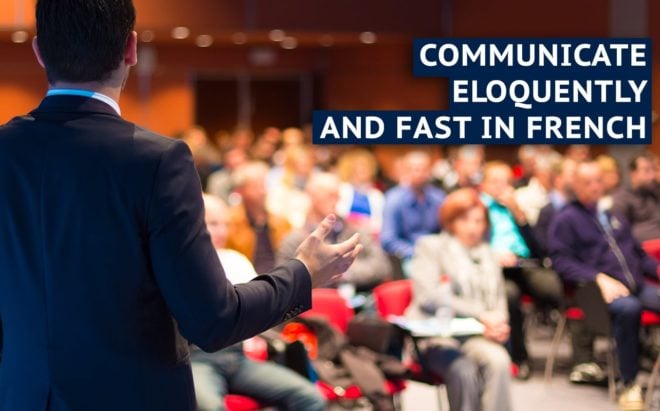 Table of Contents
Understand Everything & Speak Without Thinking
① Set up a short-term study plan
② How To Learn French as an advanced student (Level C1)
③ Zeroing in on your pronunciation and street French comprehension
④ Should French students use modern French glidings?
⑤ Drop in some knowledge
⑥ Master the French verbs and let them become second nature
⑦ Show your wit and sense of humor
⑧ Unlock the elusive modern French sounds
⑨ Understand everything – French level C2
⑩ It’s a long journey

Understand Everything & Speak Without Thinking

As an advanced French student, your goal should be:

The goal is at hand, but how do you go from being a confident French speaker to becoming really fluent?

The answer is different for each student. Some need to crank up their vocabulary. Others need help with their verb conjugations. For other students, it’s mostly the pronunciation that gives them away. Yet other students feel confident when they speak, but have a hard time understanding everybody.

So, you need to take a good look at yourself and figure out your priorities. You may want to hire a French tutor for a couple of hours, just to assess your level, your needs, and help you set up a study plan.

Taking a test such as DELPH or a level of the CEFR may also help you figure out your strengths and weaknesses, and help you determine what you should focus your studies on.

Make sure you take advantage of all the resources out-there: books of course, but also audio, video… As an advanced student, everything can be turned as a good learning tool. So, choose things that you like, like listening to French songs, but don’t pass on things that you need, like drilling on your French prepositions…

It’s easy to mistake “leisure” in French and “study” in French: I mean, watching a French movie is not going to hurt your French, that’s for sure! But how much will you have learned at the end of the movie?

In other words, in order to see real progress as an advanced student of French, you still need to set up a study plan and study hard.

And don’t forget to review! We are not robots. It’s not because you’ve studied something in the past that you’ll remember it today.

② How To Learn French as an advanced student (Level C1)

On the CEFR, French C1 means you can understand longer and challenging texts, speak fluently without searching for words and expressions, and understand implicit meanings.

The advanced C1 student is also able to use French for business and academic purposes.

So, if you want to improve your French to an advanced C1 level, here is what you should do:

Here are my tips to best learn French as a self-learning advanced student of French, learning French for his/her own benefit, not just to pass written tests. 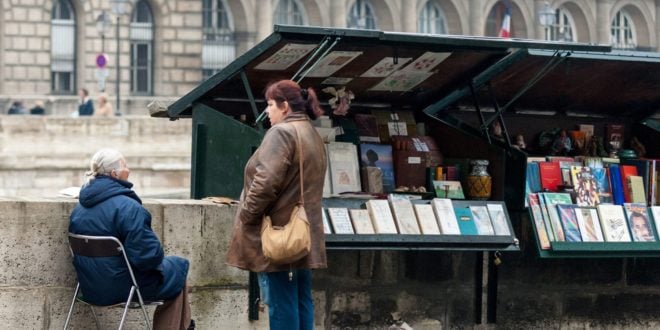 ③ Zeroing in on your pronunciation and street French comprehension

I’ve met many advanced French students who only studied French from traditional methods and French literature. Of course, their French academic skills are great, and the ace tests… But their French is not adapted to today’s modern French language.

French is an evolving language, and without sounding like a teenager, you need to keep up to date with today’s French, in particular, the glidings and modern pronunciation. When I say this, I am not talking about “hood” French, nor slang French. I’m talking about the French language everybody – me, my daughter, my 80 years old mother – talk in a relaxed everyday casual environment.

This “modern” French language affects everything: French pronunciation, vocabulary, but also word order, questions… If you’ve only studied “traditional” French, some French people will have a hard time understanding you (or you’ll sound just like a book…) and believe me, you’ll have an even harder time understanding them!

All my French audio novels are recorded at several speeds and level of enunciation, to teach you both traditional and modern French pronunciations.

If you have had no exposure to modern French pronunciation, I suggest you start with lower levels. It will be a good review (start with À Moi Paris Method – Upper Intermediate and review the tenses of the past), and I’m positive you will even pick up some new French vocabulary and expressions.

Now, should a student speak using modern glidings? I don’t think there is a single answer to this question. It’s a choice.

If you are younger, I definitely suggest you use the modern glidings to fit in and sound like the French.

If you are a bit older, and sound pretty formal when you speak English, then you may want to stick with the more traditional, enunciated French pronunciation.

But whatever you chose to use yourself when you speak French, you need to be able to understand today’s French so you understand French people, movies, and even pass the “oral comprehension” part of formal DELPH or CEFR exams.

⑤ Drop in some knowledge

As an advanced speaker of French, it’s time to drop some knowledge and show off your mastery of the French language.

I suggest you memorize some Subjunctive constructions you can easily drop in conversations… Some “if” clauses may also be useful.

People master grammar in different ways: you may excel at mimicking a construction… other students may be better when they understand and study the said construction….

Find the learning style that best suits you. My tip is to select a method that covers both: explains everything very clearly from the standpoint of an English speaker, and then give you plenty of examples (with French audio recordings of course).

Make sure you also study your French linking words, adverbs and adjectives. They do add a dimension to the conversation, however, many students only study the exceptions and never get to learn lists of useful adjectives.

When interacting, if you have to think too long before you are able to come up with your verb form, you will spend your time “preparing’ your next phrase and not really get into the actual conversation.

So you really need to drill your verb forms. Do it in the affirmative and the negative forms, so the whole thing comes quickly to you. And of course, since you are now an advanced student, you should master all the tenses and moods, including the French subjunctive which is extensively covered in my À Moi Paris Method – Advanced audiobook.

To achieve these key reflexes and make sure you don’t butcher the pronunciation of French verbs, there is no better tool than my French Verb Drills series.

In 6-minute training sessions, you will memorize the most used verbs and their tenses AND pronounce them like today’s native French speakers do.

⑦ Show your wit and sense of humor

Up to now, you were happy when you could get your point across, even if it was a bit plain. As an advanced speaker, your aim is to truly represent who you are in French. So, find ways to express your wit, your sense of humor.

In order to do so, it’s nice to know a couple of French jokes and puns. You need to dig into French culture, so you understand the references… Read the most popular French literature books, a bit of French poetry, study the arts, listen to French music…

Watching your favorite movies in French may also be useful… For example, if you are a Geek, you may enjoy dropping a “Luc, je suis ton père” in a French conversation…

Even if you had an excellent native teacher, you probably still have problems with the most complex French sounds such as the elusive “ille, aille, ouille, euille…”, the French R, u ≠ ou, é ≠è… There are tools out-there developed for students of French which explain the rules of French pronunciation and guide you to improve yours. Many students only learned French pronunciation by repetition: however, knowing the rules is actually a big help!

My very popular audio lesson “Secrets of French Pronunciation” not only covers all the French sounds (from beginner to advanced) but will also teach you how to place your tongue and lips in order to obtain the correct sounds.

It’s a great refresher course, which includes many drills and lots of practical exercises.

It will also explain the modern French pronunciation to you with many examples.

On the CEFR, French C2 means fluency – this is the ultimate goal.

I usually know someone is still a beginner in French when they tell me: “I understand a lot but I can’t speak”. I know they are advanced when they say: “I still can’t understand everything !”.

In my experience, with lots of studies and good language abilities, everybody can master reading and writing in French. Speaking eloquantly is not that difficult either.

The real challenge is understanding everybody.

I’ve written an entire article to explain the step by step method I use to help students improve their French understanding.

Make sure you don’t study only with the same source: to understand everybody, you need to prepare your ear for different French accents, various ways of speaking. You may be able to understand the news perfectly, but what about teenagers arguing? Heck, I may even have a hard time understanding them!!

TV shows, YouTube videos, songs… everything is a good learning tool for French students who want to reach C2. Try to find things with subtitles so you can turn them on if you really need to. And just get as much French exposure as you can. Watch your favorite series in French!

Check out Amazon.fr, or Amazon.ca where you’ll have more French options for books, movies etc… They can probably ship to your country. 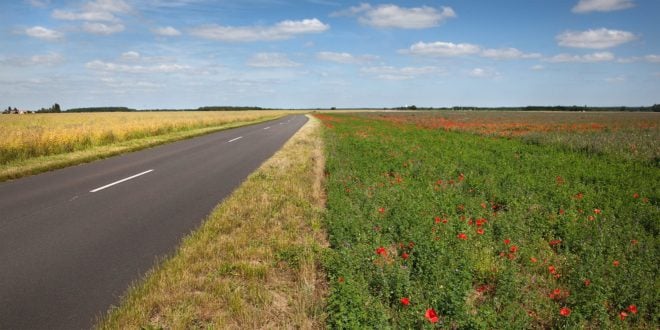 It’s a long journey to become really fluent in a language. And there are days when you’ll be off… You won’t be able to speak as well, it will feel like you don’t understand anything. We are only humans, and it happens to all of us.

So try to keep it fun. As always, fix realistic, short-term goals for yourself. For example, review the French verbs followed by “de”, then train on using “en” with them…

At that stage, speaking regularly with a French person is a must: there are lots of free options to exchange French / English conversations on Skype. Unless you prefer working with a French tutor who will be able to challenge you, yet fill in the gaps you may need help with.

Remember, no matter how good your French method is, nothing will ever replace human interaction. This is particularly true for languages!

And of course, you should go to France – or any French-speaking region – to practice your French, enjoy the culture, and have fun!

Venture off the beaten track! Why not try an immersion at a French teacher’s house? Now that you speak French, there is really no limit to where you can go and what you can experience while you are there.