Which French Language Register Should I Learn?

Literary French? Formal French? Familiar French? Common Slang? Which French language register do the French use and which register do you really need to study?

Most students learn formal to literary French. Most French people speak using a familiar register, even maybe a bit of colloquial slang.

The particularity of French is that the language register you choose will affect not only the vocabulary, but also the whole sentence structure, and also the pronunciation.

Use the wrong register and you’ll misrepresent yourself:

So let’s see what the different French language registers are, how they affect the language, and then I’ll tell you what register I believe a French student should use.

Slang, “l’argot” in French is fun to study. However, with French slang, it is extremely easy to make a really bad impression.

There are several registers to French slang. Slang can be colloquial and familiar like saying “bosser” instead of “travailler” (work), “une meuf” instead of “une femme” (woman).

In French, we have a form of slang when we invert the syllables of a word, called “verlan”: “t’es ouf” = “tu es fou” (you’re crazy). Some French slang words nowadays have an Arabic or African origin, such as “kiffer” (to enjoy) – as featured in the image above : “quel kiffe ce bouquin” – this book is such a great trip / I love that book

Some of these expressions may be OK for you to use: it really depends on how you speak in English. Do you use slang? Do you swear? How formal is your English?

However, slang can be very vulgar too, or offensive. If saying “putain” (whore, but translates more like fuck) is a very common and used swear word / exclamation in French, it will strongly stand out in the mouth of a foreigner. Furthermore, “putain” can be an insult as well.

French slang evolves. “Une nana” for woman is timeless. “Une pépé” will make you sound like an 80 years-old. Say “une zouz” and you’ll sound like a teenager from the hood.Click to Tweet

So, French students learning slang need to play it smart:

Not so easy, right?

By the way, can you really understand spoken French? Take my audio test!

What students of French should know is that this everyday French language spoken by the French is quite different from the French they are learning in school.

First of all, modern French is a mix of ‘light’ slang and formal French. It, of course, varies on the speakers’ age, level of education, personal vocabulary choice and above all, the context.

More importantly, as far as the French language is concerned, the register affects not only the vocabulary used but also the language structure and pronunciation!

Here are a few examples:

Unfortunately, this modern French is almost never introduced to French students. You may learn a few mild French slang words here and there, but you never get the full picture, with the modern French glidings found in pronunciation, and everyday form of questions.

This is exactly why I developed my À Moi Paris French learning method. All the points of French grammar/vocabulary are illustrated by a novel written using modern, everyday French. The story is then recorded twice: first in a slower enunciated way, then in a more natural way, featuring modern French pronunciation.

As a foreigner, you may decide you do not want to speak this way yourself.

That is your choice but it is still absolutely essential you train with it or else you will not understand the average French person when they speak.

Formal French is what you’re likely to have learned in school.

It’s the language used when the speaker wants to “make a good impression” and speaks to someone s/he doesn’t know at all or wish to show special respect for.

That’s how newscasters speak on TV or most politicians.

That’s how I’ll speak during a job interview, or if I meet people I’m trying to impress.

In formal French, one would use “vous” instead of “on”, proper grammar, proper vocabulary. Questions are likely to be formed with inversion. The pronunciation will be more articulated, a bit slower, and featuring all the proper liaisons.

However, in everyday life, French people are not all that proper!

If you speak mostly using formal French vocabulary and enunciation, be particularly careful when using French slang. In your mouth, a strong French slang word will really clash!
Click to Tweet

We call this “le français soutenu”. This is an extremely formal and elegant language used in literature of formal French letters.

Unfortunately, a lot of French textbook feature only formal or literary French. It’s also the French pronunciation still featured in the large majority of audio methods.

Speaking this way will make you sound overly sophisticated, possibly snobbish and definitely old-fashioned. If that’s the image you want to send, it’s fine. But it’s important you are aware of it.

Yes, we do. Or at least, we try to. The ability to switch between language registers will vary from people to people.

I use mostly everyday modern French. Because of my upbringing, also my age (I’m 47 as I write this article), I tend to use a bit of formal French too. And sometimes, when I want to impress someone, I may use a bit of literary French, even quote poetry or famous authors.

My daughter who is 14, is learning to use formal and literary French in school, for her essays. It’s funny to see her try to push up her French, use fancy words and constructions. She often makes mistakes, and I tell her to simplify her French. She first needs to get the basics right, then she can push it to the next level – without trying to impress too much or she’ll sound like a snob.

So, there is a fine line. You do want to show your wit and education through the language, but you also need to show that you are a fun, approachable, normal person.

What French Register Should a Student of French Learn?

It’s a question you should ask yourself. The answer will vary on your age, the reason you are studying French (to communicate or to pass exams) and your personal preference.

For most people, I would say modern French and formal French. A bit of colloquial slang here and there to show you’re “in”, a few fancy words when you want to impress. And above all, a correct French pronunciation.

In my audiobooks, or in my newsletter, when I explain vocabulary words, I always add notes on the register I’m using.

As you now understand, it is really important to study from a method that will teach you the register you want to use, but also prepare you to understand the register most French people use nowadays = modern French. 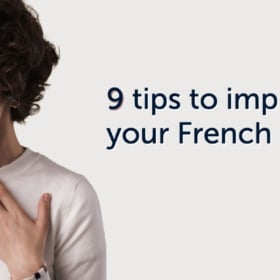