You probably have heard of “le Verlan” which consists of inverting syllables in a word (the word “Verlan” itself is an inversion of the word “l’envers” (‘reverse’).

For exemple know thank you in French – merci – in verlan it becomes “cimer” – it’s very used in modern spoken French.

This slang form is prevalent throughout the French language and some verlan words are even now found in French dictionaries.

Many of you have studied common French slang: “un bouquin” for ‘a book’, “un mec” for ‘a guy’… All these are still used nowadays.

What is Modern French Slang?

The “D’jeunes” (youth of the millennium) have incorporated traditional slang, verlan, Arabic & English words and shorthand SMS spellings into their language, sometimes even compounding them like inverting the syllables of an Arabic word…

Your idea is way too strange in modern French slang

This slang expression is actually pretty common and is the contraction of an inversion (verlan) of the word “bizarre”. This way, a 3 syllable word becomes just 1 syllable – much more efficient for the busy d’jeune :-)

She was drunk and he was high (on drugs)

Yes, there is a distinction! “Se bourrer” or “se bourrer la gueule” is to get drunk.

The verb “bourrer” means to push too much into or to over fill/force into (probably stems from the word “labourer”, to plow a field) so logically, to put too much alcohol into your body is “se bourrer” [d’alcohol]….

Because taking drugs usually involves smaller quantities and also tends to have more detrimental effects, we have a different verb for it.

“Défoncer” is to break or smash something,

“Se défoncer” on the other hand can mean ‘to put all your energy into something” like “depuis qu’il a commencé son nouveau job, il se défonce” or it can also mean to take drugs.

Stop freaking out and get your ass over here

“Flipper” is a perfect example of a borrowed English verb “to flip” being conjugated in French. It follows the standard ER verb form so it works in every tense: “Il a flippé” or “est-ce qu’il flippait?” (although I have yet to hear the subjonctif plus-que-parfait version: “que j’eusse flippé” ;-)

Obviously “amener” is ‘to bring’ and “ramener” is to bring back and both can be used in this context.

“Ramène-toi” is closer to ‘bring yourself back here’ but can be interchanged with “amène-toi” no matter if you have already been there or not. It’s a pretty common slang that you’ll hear in a lot of movies and TV.

This one is less of a specific new d’jeune slang word but more a bad grammar turned into expression.

If you spoke ‘regular’ French, to say it’s so embarrassing, you’d say something like “c’est honteux” or “j’ai honte de…”

I saw an incredible/crazy thing

“Ouf” is the direct verlan of “fou” or crazy… Also very commonly heard in the streets and in movies.

“Truc” is not a d’jeunes specific word but is common language for a “thing” or one of my favourite US expressions: ‘a whatchamacallit’… More about “ouf” on the Local.fr

‘the young’, ‘the old’ in modern French slang

“Vioc” is the term for old people and can sometimes be used to talk about ones parents… The origins of that expression are harder to pin point but is most likely a contraction of “vielle” (‘old’) and “loque” (‘a rag’).

“Gueule” is normally the word used to describe the face of an animal ex: “La gueule du loup/chien/crocodile” and is the proper word to use in that context.

In this context, “mangé” means to hurt oneself – maybe because a flesh wound looks like a bite from a piece of meat... You could also say “je me suis mangé en moto” (‘I crashed on my bike’).  It most often means that you actually hurt yourself but can also be used as a general meaning to “fail” like: “merde, je me suis mangé à mon exam de maths” (‘shit, I totally failed on my math exam’).

Note the grammatical evolutions: “comment” is wrong here, it should be “comme”: “comme elle est belle ! (‘she is so beautiful’). Also “Tu as” becomes “t’as” or even “ta”. Once again, we are talking slang French here, not proper French… 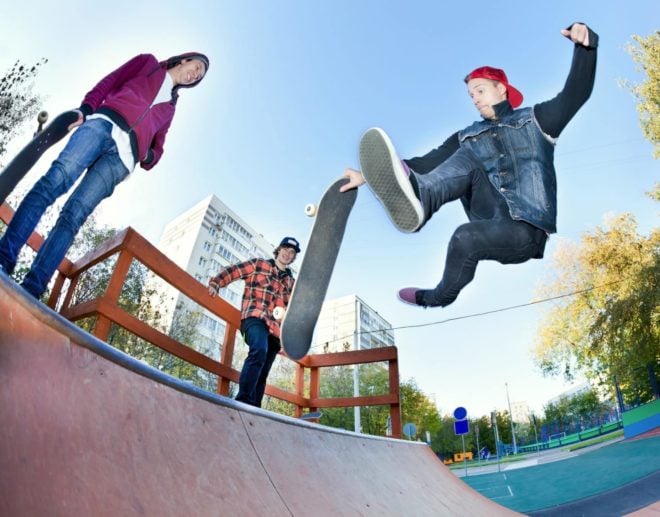 “Se la péter” is to be pretentious.

The word “péter” is also the slang for “farting” and for “breaking/exploding”. “Il ne faut pas péter en public” (‘one shouldn’t fart in public’) – “J’ai pété la télé” ‘I broke the TV’ – “la situation internationale va finir par péter” ‘the international situation will explode one of these days’.

‘There are only ugly girls in this club, let’s get out of here OK?’

“Un thon” is the French word for tuna fish.  One has to be careful when referring to someone as “un thon”, as it is an insult. Interestingly, “un thon” is a masculine word but is always used to refer to a woman.

In this context, “se casser” (literally ‘to break oneself’) is to leave a place.

Note the common use of “on” instead of “nous” as it is featured in our French audiobooks. Our French method teaches both classical and modern French dialogues and features a realistic French story recorded at different levels of enunciation (traditional and modern).

Here we see the influence of the Arabic immigrants into the d’jeunes speak.  “Kif” is the the arabic word for “a sense of well being/happiness” (also can describe the combination of tobacco and hashish!) and is now very much used by the youth to replace the verbs ‘like’ or ‘love’.

J’te kiffe is modern slang for “I love you” in French.

“Une Meuf” is one of the most common verlan word used today.  It’s the inversion of the word “femme” -> me fem -> meuf (dropping the last vowel is common in verlan – whatever is easier to say will remain).

“This loser is so weird”

“Le bouffon” is a very ancient word for the king’s jester (or the one that makes everyone laugh by doing silly things). It is now very commonly used in modern French slang to describe a loser or a someone you do not respect at all.

‘This or it sucks way beyond words’

This expression is kind of a strange combination of a relatively new but popular French saying and transformed older slang words.

You can pretty much insert any adjective in that expression to emphasize any concept you are trying to put across.

The word “Craignos” comes from the argot expression “ça craint” meaning that the situation is dodgy, dangerous or really bad depending on the concept. In order to apply it as an adjective, the word gets transformed into “il est craignos” which can mean a range of things like a low life, someone bizarre or someone dangerous.

So combining these 2 concepts gives you the full expression of a situation that is REALLY dodgy or sucky.

‘You really don’t understand anything!’

“Capter” is to receive a broadcast using some sort of antenna like a radio or satellite dish, we say “je capte pas NRJ à la maison” (‘I can’t tune into the NRJ radio station from home’) but in this case, it has been applied to someone to describe them as not able to understand anything.

‘She stole his iPhone‘

Here again, we find a word that is the inversion of an existing older slang word… “péta” is the verlan of “tapé” which in itself is argot (slang) for stealing like “il m’a tapé ma clop” (‘he stole my cigarette’).

Not to be mistaken with another slang word, “péter” which is to break. So “Elle lui a pété son iPhone” means “she broke his iPhone”.

To be on Fire

“Un taquet” is a piece of wood that you use to hold / block a door. So, if you are blocked, you build up a lot of energy. Then, you are ready to explode. And that’s when you use this expression.

Believe it or not, this expression comes from a dialect of Occitan traditionally spoken in Gascony called Gascon. See my article on regional French accents and dialects.

How it became a current slang word is a mystery to me, but it is very used nowadays. It means to be very motivated, and can be spelled lots of ways: “niaque”, “gnaque”…

You need to step-it-up. Period.

“Bouge”, or “Bouge de là” means “move out of the way”, so it’s the idea of moving to the side. But when you use the reflexive “se bouger”, the meaning is different.

“Point barre” means full period. Or period and a slash. So it means it’s the only thing you have to do, no need to comment or say more about it, end of conversation.

I can’t screw up.

The French slang verb “louper” is not particularly modern. It’s been around for some time now, and is slang for “rater”, “échouer”, “manquer””.

What is really new about it is the reflexive use: “se louper”. Used for a single person, it means to mess up. Used for several people, it means to miss each other as in to fail to meet up.

We also use: “se planter”. This expression was already around when I was young, it’s very used in French.

Note how the “il ne” of the “il ne faut pas” dropped. This is modern French for you…

This French slang expression has exactly the same meaning as in English: “je suis grillé” means “I’m toast”, done, finished. You can also say “c’est grillé”, or “c’est foutu”, both slang for it’s over.

We have 2 fun “traditional” idiomatic expressions for say the same thing:

Both mean that it’s all over, and there is no more hope.

French Slang is Not For Everybody

These expressions should be used ONLY by young people, they evolve very fast and can be obsolete after only a couple of years.

Many of them come from the streets, and would be frowned upon when used in the wrong context.

You need to understand them, because you’ll hear them in French movies, songs… and maybe in the streets of France.

But I wouldn’t use them – actually, I don’t use most of them.

Besides, French slang sounds really bad when a non native speaker tries to play it too ‘hip’ and uses too much of it.