By Camille Chevalier-Karfis on February 13, 2019

How to say I love you in French? Learn nuances of love in French, from friendship to romantic love + avoid cultural misunderstandings.

How To Say “I Love” You in French

The typical translation for “I love you” is “je t’aime”.

It’s not false, but it’s far from being complete.

I love you In English

In English, the verb “to love” is confusing because it expresses a variety of feelings. You can say “I love you” to someone you are in love with, but also to your parents, or even to a friend.

I love you in French

When talking to several persons (like your parents), or someone you are being formal with, you need to use the “vous” form: “je vous aime”.

So let’s take a closer look to the French verbs “aimer” and how to express different kinds of love in French.

1 – To Say to Like or Enjoy, use the Verb Aimer With an Adverb.

Let’s see how to talk about feelings in French, from total dislike to great friendship, keeping it all on a friendship level.

Let’s be clear: we are talking about friendship here, not romantic love, not being in love!

To express the notion of “to be in love” in French, so romantic love, we use a precise construction:

Aimer + person’s name, without any adverb.

As stated above, the typical way to say “I love you” in French is:

So I know this is a bit weird: no adverb at all will end up being a stronger feeling, being in love, than a construction with “beaucoup” which stays on a friendship level….

Many French love songs and movies have a dialogue along these lines:

3 – Exceptions About the Verb Aimer:

You can use aimer without an adverb with your immediate family (parents, siblings, children, pets) to say that you love them (not that you are in love with them), but NEVER with your friends.

Note that if you really wanted to be clear, you could use the expression “être amoureux/amoureuse de”  (careful, not “être en amour” which they use in Canada, but not in France).

To talk about liking/ enjoying/  loving things we also use the verb “aimer”.

If someone asks “est-ce que vous aimez le vin?” (do you like wine in general), you cannot answer “oui je l’aime”.
You have to say “oui, j’aime ça”.

When talking about things in general, either repeat the thing in your answer, or use “ça”.
You may use an adverb to modify your verb, it’s more eloquent.

But you cannot replace “le vin” in its general value by a direct object pronoun like le or les. I don’t know why…

When talking about a precise thing, it’s OK to use a direct object pronoun.
And much more common to answer with an adverb to modify aimer.

I would not say “oui, je l’aime”. Maybe it’s just me, but it doesn’t sound good to my ear. I would use an adverb in my answer.

I am sorry I cannot be more clear about a rule… but I don’t think there is a rule! I believe this is just an evolution of the language and falls under expressions more than grammatical rules.

6 – Use French Adverbs to Nuance “Aimer”:

When someone asks you if you like something/someone, it’s customary to offer a nuance in your answer and use an adverb.

We’d use “bien, beaucoup…” to nuance the answer:

Except when you are talking about being in love with someone, as discussed above… Then you need to use “aimer” by itself, without any adverb.

Is l’amour. But what is so weird about it is that it is masculine in the singular, and feminine in the plural !!!

You need to watch your pronunciation for “l’amour”, love in French. French students often mistake:

Finally, to ask the question “would you like to…” we don’t use the verb “aimer”, but the verb “vouloir – to want“.

It’s yet another example of why translating doesn’t work.

Read my blog post about  using “vouloir” and making invitations in French.

Voilà, I hope this lesson clarified things about the use of the verb aimer in French.

On a related subject, you may like my audio blog post “les Petits Noms d’Amour“, and “Why French Women Don’t Date“, or also “How to Ask Someone Out in French“, or even the more daring (and explicit – adult language) French Sex Vocabulary. 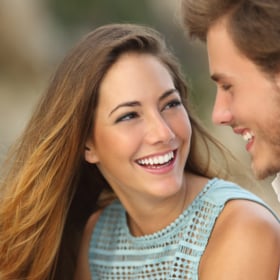 How To Ask Someone Out on a Date in French