So, you met a Frenchwoman or a Frenchman, and you’d like to seduce her or him. Well, you can’t possibly start by saying I love you in French – which is probably the only thing you learned in school that would be remotely connected to flirting in French…

I’ll help you out! Let’s jump right into the flirting in French scene with some common sentences to flirt in French.

Table of Contents
11 Phrases To Flirt in France
13 French Flirting Words
6 Compliments in French
How To Ask “Go Out With me” in French?
What About Flirting and Dating in France ?
How to Ask Someone Out in French
French Pick-up Lines
Terrible French Pick Up Lines

11 Phrases To Flirt in France

Here are some typical phrases used to flirt in French:

I’ve written a whole article about saying “I love you in French” in many different ways, but also alternatives to dropping the L bomb, French love vocabulary and tips to avoid cultural mistakes. 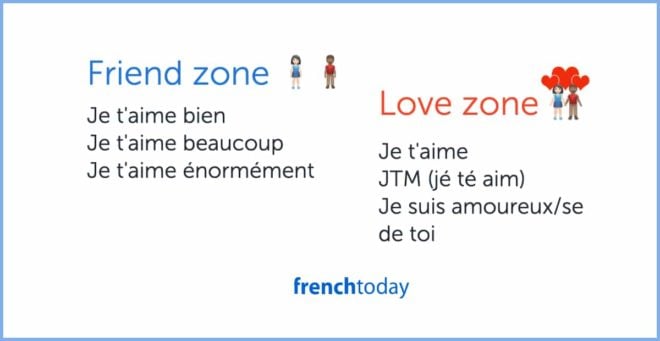 Paying a compliment to someone is part of the flirting game.

Here are some nice compliments you could use: I’ll put them in the feminine – us girls, we don’t really need to pay guys compliments, do we? JUST KIDDING!!!

By the way, mesdames, if you are interested, here is my (apparently controversial! – see all the comments) article about French women beauty secrets.

Now that you have the essential French flirting vocabulary, let’s see how to ask someone out on a date in French.

How To Ask “Go Out With me” in French?

To say “would you like to go out with me”, we say:

Watch out though that “sortir” has the same double meaning as in English: it can mean to go out socially or romantically. The context will make the difference… or can lead to misunderstanding…

Once you are dating, you may want to use a French love nickname with your French sweetie – Many more in my article with audio.

What About Flirting and Dating in France ?

There are some very important differences between dating in France and dating in the US for example.

I wrote a whole article about dating in France – I suggest you read it should you intend to date someone French.

An important tip about dating in France is that dating tends to be exclusive – from the start. We usually don’t need to have this “let’s stop seeing other people” discussion that’s often featured in American sitcoms…

But I’m digressing. Read the article to know more!

How to Ask Someone Out in French

If you want to be more specific when asking someone out in French, you could ask:

But only young teens would use that line… Adults would use more standard pick-up lines – we’ll see some examples below.

The Local.fr released tips on how to seduce French women – where it’s appropriate to flirt in France etc… Check it out!

But first, let’s address a complicated question: how do you call your partner in French when you are an adult?

How to Say Boyfriend / Girlfriend in French?

Even saying girlfriend or boyfriend is problematic in French!

That’s fine when you are a teen, or when it’s a new and casual relation. However just as in English, the French wouldn’t use this to describe a long-lasting relationship.

When we are in a serious / long lasting relationship in France, we are more likely to call our love partner :

This is not specific however, but is the word grown-ups would use.

So how to know whether we’re talking romantic friend?

Most of the time, it’s the context. We often add a possessive adjective – mon amie(e).

So contrast these two options:

It’s not set in stone, but the second way of introducing Pierre is likely to be the romantic partner.

For homosexual relationships, we tend to use “mon/ma partenaire”, although “compagnon / compagne” is also common.

If you are engaged, it’s “mon fiancé, ma fiancée”.

What Does “Être Célibataire” Means in French?

“Être Célibataire” in French is not what you think!

It’s also the marital status of someone who is not married. So if at a party, a French woman asks a guy:

She may be flirting – or at least, fishing out for information!

I’m not a big fan of pick up line, hence the short list! Actually, according to me, most pick-up lines are terrible…

This line became a classic, and French people use this pick-up line in a humoristic kind of way – but still paying you a compliment of course.

I have no idea where this one comes from. It means “hi pretty blond” but can be used with a brunette… it doesn’t matter!

It’s humorous as well, it is to be said with an exaggerated seducing look, kind of “hey gooooorgeous” or “how you’ doing?”… and is a smooth way to make fun of yourself and actually pay a compliment to “la belle”.

If you liked this article, I may also like: