The French don’t “date”… So what is a man to do? Here is how to navigate the French dating system… or lack of it!

It is so funny to see how some social behaviours are exactly the same between France and the US, and others are completely different. One of the very obvious difference is the dating game.

Table of Contents
1 – Dating in the US Versus Dating in France
2 – No Dating Protocol in France
3 – Making the Situation Clear
4 – Flirting is an Artform in France
5 – Body Language
6 – The French Woman has the Power
7 – Working Hard for it
8 – Love and Sex in France
9 – Dating is Exclusive in France
10 – What About Saying “I Love You”?

Well, this was a big shock to me when I arrived in the US. I had no idea what “dating” meant.

I understood of course a man and a woman could be interested in each other in a romantic way, let me reassure you.

But I was not aware that accepting to go out to dinner with a man alone gave the signal that I was possibly romantically interested in him.

Nor did I know about this first date, second date and third date business.

2 – No Dating Protocol in France

In France, it’s very common for a girl to go out to dinner with a male friend.

Even for a married woman to go out with a male friend who is single.

I often travel to Paris by myself; my daughter Leyla and husband Olivier stay in Paimpol. I often have dinner with one (or several) of our good (male) friend(s), whether they’re single or not.

Olivier trusts me, and we both trust our friend(s), who would never make a pass at me. I guess it’s much more accepted in France for men and women to be friends.

However, if a woman is dining with a man, you can bet he will pick up the check. Some old habits die hard. I usually trick them by asking to be excused (as if I was going to the lady’s room, grab the waiter and give him my credit card).

But I would never do that to my Dad who would be very upset if I did. But I digress…

When I meet a man and I am without my husband, I’ll place within the first minutes of the conversation that “my husband blablabla… and our daughter blablabla…”. That usually is enough to make my state of mind really clear.

I did the same thing as a girl, talking about my boyfriend (actually existing or not)  early on in the conversation.

Now, not everybody does that of course, some girls like to play, and sometimes lose themselves in the game, or hurt people. Some boys never give up… and sometimes their tenacity pays off… And some people are just not faithful, but contrary to popular opinion, it’s not worse in France than anywhere else (and several studies demonstrate it).

4 – Flirting is an Artform in France

French people flirt. It’s in our genes and it’s socially accepted in France. A Frenchwoman is expected to play her feminine side, and be “admired” for her beauty and wit among other qualities.

Frenchmen like to flirt as well, even if they know very well there is no hope of it leading anywhere. The game is the main point, it’s relatively innocent and usually no-one gets hurt, just a little blushed :-) 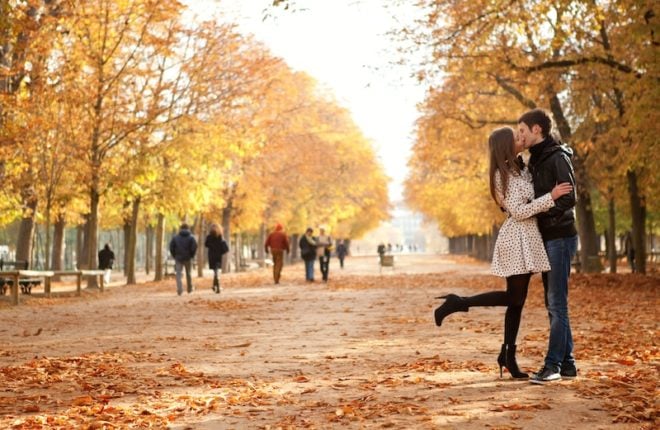 With kissing hi and goodbye being the standard and French women being more “flirtatious”, it can be difficult for foreigners to correctly read a French woman’s body language.

I guess since there is no set protocol, French women are pretty obvious, and often more direct than other women.

You will know when a French girl is flirting with you: she’ll smile to excess, move her hair a lot, smile at you, blush, laugh hard and loud at your jokes, find occasions to touch your shoulder (or even your knee… oh la la),… and it’s not unlikely that she’ll make the first move. So relax and enjoy the show :-)

As for French men. Well, they are men. It’s unlikely they’ll refuse to take it further, but not unheard of. Again, the game is often more important than the catch, even to men.

6 – The French Woman has the Power

It all boils down to this. The woman has all the power when it comes to dating. She decides whether she wants the guy or not, and may need more than one dinner to make up her mind… Then, she’ll make the situation pretty clear… or just keep on flirting for the joy of it.

It’s then up to the guy if the company of “la belle” is enough for him, or if the game has lasted long enough – in which case no-one is forcing him to continue to invite her.

In any case, there is no obligation nor expectation whatsoever for the woman to do whatever after any number of “rendez-vous galants”.

So, since there is no dating protocol, French guys have to work hard for it… They cannot just assume that if the girl accepts to go out with them three times, “c’est dans la poche” (it’s in the pocket, it’s a done deal).

Maybe this is why French guys have the reputations of being so romantic, and… tenacious !! We trained them well (with some exceptions of course… pretty much every politician :-(

Believe it or not, at the opposite of all the stereotypes, French people are much more about love than sex.

Talking about sex is not taboo in France as it is in the US, and it is much more present in humor, art, tv and everyday life than in the US… and so is nudity: children are often naked on the beach, women can go topless (although it’s less frequent now than when I was young)…

Still, sex is very much associated with love. I wrote an article about French Sex Vocabulary if you are curious – watch out, it is explicit and written for an adult audience.

Many of my French friends – men and women alike – have waited to meet someone special for their first time, didn’t just want to get rid of their virginity, and have never had one night stand.

If sex between consenting adults is very much socially accepted, a lot of French people won’t rush into it, and get to know each other before jumping into bed.

9 – Dating is Exclusive in France

It’s only in American movies that I found out about this “let’s be exclusive” concept.

In France, pretty much once you’ve exchanged a kiss,  it’s expected of you to be exclusive: you don’t chase several rabbits at the same time… Maybe that’s why things take a bit more time to develop in France – we like the game, and we like to take our time playing it.

It’s actually the first point they made in this video, which I really liked:

In many cultures, saying I love you is a milestone in the relationship. It doesn’t seem to be that important in France.

According to a show on France 2 national TV channel,8% of French people would be ready to declare their love on the first day!! Yet, France 2 also says many French feel comfortable saying “I love you” within 2 months of the relationship (Frenchmen: 88 days, Frenchwomen 134 days!)

I hope this article shed some light on the French dating system… or lack of it. Of course, this is only my opinion – please take it as such.

And if you like this article, you’ll probably enjoy my “French women beauty secrets” article.

And for more about “l’amour” in France, check out my Saint Valentin article.