This is always a problem for my students. Understanding the French school system, l’école française, knowing which grades are which is a real nightmare. So here is a post that should make things easier. I wrote the equivalent grades in the US/UK school system, and the age of the students for reference.

How to Say School in French? 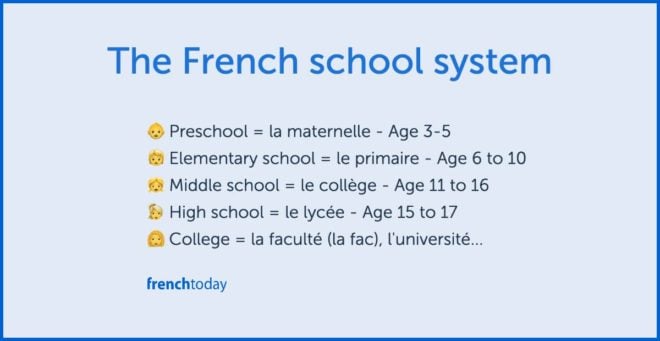 How to Say Preschool in French?

Read my thoughts about switching from an American to a French preschool system.

How to Say Elementary School in French?

Elementary school in French is “l’école primaire”, or “le primaire” and it is compulsory in France. This means that in France, kids 6 and up must go to school (see the paragraph below about homeschooling in France).

The age indicated in this article is the minimum age you are supposed to be when entering that grade.

Of course, it’s a bit flexible: Leyla is from November, so we had a choice: she could have been one of the youngest or one of the oldest in her class. With the agreement of the school director, she joined CP at 5, turning 6 in November and therefore finishing that grade age 6.

It could be the contrary as well: kids entering CP at 6, turning 7 that year: it’s the majority of the cases.

And some kids also repeat years (this is called “redoubler” in French).

Of course, there are always unique cases.

What is the French Word for Middle School?

It starts with “le collège” – Middle School. Kids usually attend Middle school in France from age 11 to 16. Some kind of formal education is compulsory in France till 16.

The collège ends with a test called “le brevet“.

There are several “professeurs” (un professeur, always masculine even when referring to a woman teacher.

Camille est un bon professeur, but in slang, you can say “un/mon prof” or “une/ma prof”)

Collège in French vs College in English

Watch out for the common French mistake:

The best way to memorize these kind of subtleties is to learn French in context. My beginner level audiobook A Moi Paris L1 has a chapter about elementary school (ch 17), and in my intermediate audiobook method  A Moi Paris L4 chapter 1 describes a typical day at a university.

Both French audiobooks clearly explain French and then illustrate the new grammar/ vocabulary points with a level-adapted bilingual French story recorded at 2 levels of enunciation (enunciated and modern).

High school in French is called “le lycée”. Students are about 16 to 18 years old.

Le lycée can be in general studies, with some specialty as in languages or sciences, leading to the diploma of Baccalauréat général (commonly called “le bac” – do say the “c”), or prepare you for a special trade (hairdresser, a cook, mechanic…) leading to CAP or BEP diplomas – you can stop at 16 years old – or to a Baccalauréat technologique.

Studies in France are compulsory until you reach 16 years old, but they can be in school or in some kind of study/apprentice program. 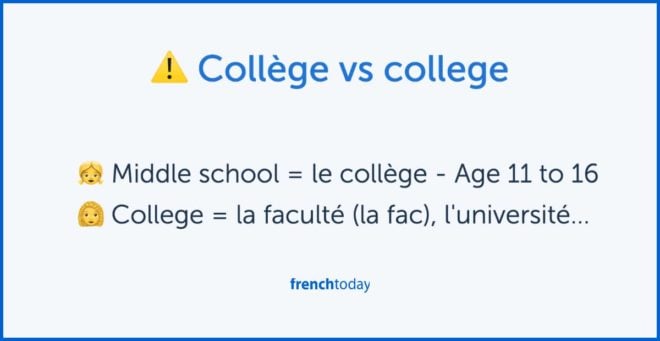 You need to have le baccalauréat to get into these schools, and Les Grandes Écoles often require that you have “une mention” (honors of the jury) to get in, or that you pass a special test.

Most children that are home-schooled in France are so because their parents are traveling, or because the kids have a medical condition.

Homeschooling parents have to register with the French school authorities and potentially face yearly inspections/evaluations to make sure the children keep up with French educational standards.

How to Say to Take a French Class in French ?

In French you cannot say “French class”. Your class is not French itself: it’s a class about the French language.
Saying “French class” is an idiom in English.

So translating word by word and saying: “une classe française” is a mistake.

So here are a few possible translations to talk about your French class:

In any case, to say “French” for a class, it’s “de français“, never “français/française”, which is my point :-)

More about how to translate French and France in French.

How to translate ‘I study French’ in French

To say ‘I study French’, here is what you can say:

You may also enjoy: