Do the French Celebrate Thanksgiving? 🦃

Do the French celebrate Thanksgiving? In this article, you’ll find the French Thanksgiving vocabulary as well as cultural notes about “le Jour de l’Action de Grâce(s)” as they say in Canada.

So first let’s see what happens for Thanksgiving in France.

Table of Contents
Does France Celebrate Thanksgiving?
What is Thanksgiving in French?
Do The French Really Say “Le Jour De Merci Donnant”?
French Thanksgiving Vocabulary
What Sound Does a Turkey Make in French?
Black Friday in France
Thanks in French
How to say ‘I’m Grateful For” in French

Not only France doesn’t celebrate Thanksgiving, but the majority of French people don’t have a clue about what Thanksgiving is, and how important it is a celebration for our friends to the West.

Thanksgiving tradition is linked to the early British and French settlers that came to the Northern American continent, and it celebrates how these settlers shared their food with their Indian neighbors as a way to say “thank you” for showing them things they could eat: turkey, corn, sweet potatoes…

As big of a celebration as it is in the US and Canada, that’s pretty much the only countries that celebrate it (with few exceptions like Liberia or the Norfolk Islands).

For the French, the only idea of Thanksgiving they have is from American movies or sitcoms, where they can see the traditional, and often dysfunctional and/or hilarious, Hollywood view of it. “Friends” was a big hit in France and many French people remember Joey getting his head stuck in the turkey!

They are often surprised to find out that Thanksgiving in the US is a 2 days national holiday which is, in many families, more important than Christmas.

And let me tell you, putting together a traditional Thanksgiving meal in France can be a real feat – see why in Olivier’s article!

What is Thanksgiving in French?

French-speaking Canada is where the French language and Thanksgiving really meet.

So the ‘official’ French translation of Thanksgiving is the one used in Canada: “le jour de l’action de grâce(s)” (although the English word “Thanksgiving” is also very much used there). 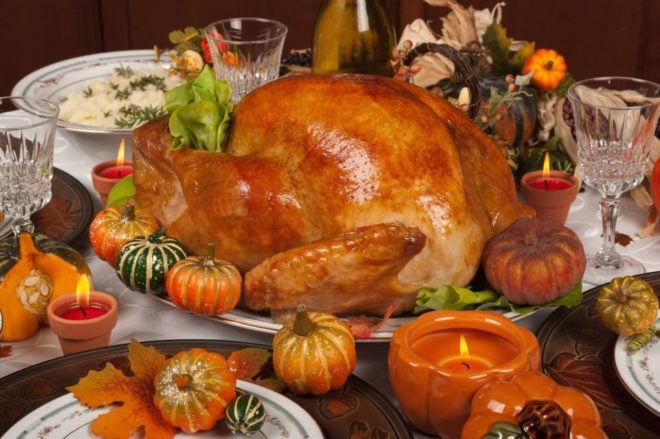 What Sound Does a Turkey Make in French?

In French, “la dinde” (female turkey, also the name for the meat), and “le dindon” (male turkey) “glougloutent” – the verb is glouglouter, it’s a regular “er” verb, and the noun “le glougloutement” (we also say “glouglou”…)

“Black Friday” marks the start of the Holiday sales in the US (les soldes = sales).

In France, it started around 2015  with only big companies sending out “Black Friday” or “Cyber” sales over the internet or even coupon through the mail. It was still discreet though.

In 2017, I saw it for the first time affecting the stores in my small town of Paimpol, Brittany!

In 2019, it’s all over the Internet! All the online stores have some kind of “black week”, “black Friday lunches (!!)” (In English – see the picture of my inbox below)…

I thought it would be hilarious to actually ask French people what they think “Black Friday” refers to… So I actually went in my small Brittany town street and asked people about it: learn more about “Black Friday” in France and sales vocabulary in my article.

Now let’s see how to thank in French.

Click the blue text next to the headphone to hear me say that word or sentence in French.

Learn 30 ways to say thank you in French in my in depth article with many examples and different ways of saying thank you and audio recordings.

Another way to say ‘thank you’ is to use the verb “remercier”, but it is quite formal in French, much less common than using “merci”.

How to say ‘I’m Grateful For” in French

At Thanksgiving, it’s a tradition to go around the table and say what you are grateful for, thankful for that year.

In French, to say you are grateful, the expression is “être reconnaissant(e)”