30 Ways to Say Thank You in French & Audio Pronunciation

Saying ‘thank you’ in French is easy: one word: “merci” (mair see). But it’s not the only way. What about saying “you’re welcome?” or expressing your gratitude in French + audio recording.

So let’s dig into the different ways of saying Thank you in French!

Thank You in French

The most common word to say ‘thank you’ or simply ‘thanks’ in French is “merci“.

It’s pronounced like “mair see” (watch out, no “mur” sound!!). The “you” part is included, so watch out, we don’t say “merci tu” like I sometimes hear students say.

You could nuance saying thank you in French it this way:

Watch out for “merci bien“. You’ll hear it in France, but it may be frown upon in upper social classes. So I suggest your stick with “merci beaucoup“.

As with saying hello in French, it’s always more polite to follow your thank you with “Monsieur, Madame or Mademoiselle” or the name of the person.

Madame or Mademoiselle ? If the difference is no longer used in administrative forms and letters, they both still are very much used when speaking. 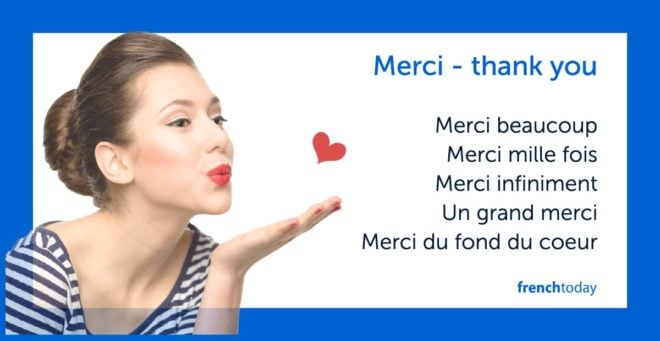 Thank You in French Slang

You may have heard of “verlan”, this French slang which consist in inverting the syllables of a word.

Well, to say thank you in French slang, we say: “cimer“. Verlan is not a new slang thing, but saying “cimer” is kind of new. It’s very used nowadays by the young generation but was not used when I was younger.

A word of caution about slang: if slang can sound natural, or hip and cool in the mouth of a native French speaker, it often sounds contrive or even weird in the mouth of a foreigner. Besides, it’s very easy to make a “faux pas” using slang in a situation that wouldn’t be appropriate.

For example, I’m 48 as I write this article. I can’t imagine saying “cimer” – it would sound ridiculous coming from me!

Another way to say thank you in French slang is “merki“. This is French pop culture: it comes from a French comedian, Elie Semoun, whose character Micheline (Mikeline) pronounced the s and ch like k. “Merki” was the title of his 2009 live show.

This would only make sense if you used it with a younger crowd, but if a foreigner was to drop a “merki” to the right audience, they’d probably be flabbergasted!

My Thanks To You in French

If you wanted to direct your thanks in French to a specific person or group, you’d follow your “merci” with the preposition “à”

Thank You For Something

If you wanted to thank someone for something in French, you’d use the preposition “pour” – so it’s the same construction as in English

Merci pour les chocolats !
Thanks for the chocolates!

Yet, if what follows thank you is a French verb, then it would be the preposition “de”.

Merci de me répondre rapidement.
Thank you for answering me quickly.

The French Verb to Thank

Another way to say ‘thank you’ is to use the verb “remercier”.

Note that the verb “remercier” has a stem in “i”, so the final sound will often be a vowel, just like the verb “étudier”.

It’s usually followed by the preposition “pour” – just like to thank is followed by for in English.

Using “remercier” is quite formal in French, much less common than using “merci”.

When talking about the thanks, the noun, you’d use the noun “le/les remerciement(s)”, usually used in the plural.

Being Grateful in French

To say you are grateful in French, the common expression is “être reconnaissant(e)”

Other Ways to Express Your Gratitude in French

Here are other expressions to address you thanks in French 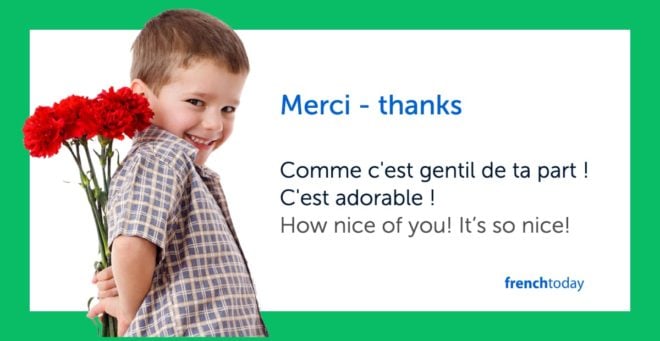 How To Say “You are Welcome” in French

To answer ‘thank you’ in French, we’d use:

Note that although very very common “de rien” (it’s nothing) is not considered proper by some French people and will be frown upon in upper social classes.

You’ll also hear “il n’y a pas de quoi”. I would rather translate the intention into “don’t mention it”. You’d only say this when you really mean it was nothing at all.

Watch out! “Bienvenu” means you are welcome as in “welcome to my house” “bienvenu chez moi”, or “je vous souhaite la bienvenue” – I wish you welcome… However it’s never used as an answer to thank you in France.

Thank you Notes are not Common in France

It’s not very common in France to write “une carte de remerciement”. I mean, it’s very polite, but it’s not like in the US or England where thank you cards are a huge market.

Feel free to send out a thank you note – it’s in no way a “faux pas”, just don’t expect your French friends to reciprocate. Here is more about writing letters in French.

No Thanks in French

If you say “merci” with a smile, it implies that you accept whatever is being offered to you. If you wanted to reinforce that you accept, you could say: “oui. Merci.“

However, you could say “non merci”, and shake your head “no”. Or even just say “merci” with a hand gesture, showing your palm to the person in front of you in a kind of stop gesture: this would mean you refuse. You may like my article on how to accept and refuse in French politely.