Complete Guide to You in French

There are five words to say you in French: vous, tu, toi, te and t’. Learn the French yous, including a complete analysis of tu vs vous + phrases to switch.

There are five words to say you in French: tu, vous, toi, te and t’. Here is a guide to the French yous, including an in depth analysis of tu versus vous.

To understand you in French, let’s first see the differences between “you” in French and “you” in English.

“You” in English is what’s called a pronoun. It replaces a noun.

In English, “you” is magical because it works for anything “you” related!

The noun that “you” replaces in English can have different grammatical values:

But who cares? It’s always you!

In English, you also use the same word “you” to talk to people in formal and informal settings.

For exemple, when talking to an elderly neighbor you don’t know well, you’d use “you”. And you’d still use “you” to talk to your best friend.

Of course, when you speak English, you don’t need to ask yourself this kind of question… It’s the same word!

As far as the pronoun “you” is concerned, English makes things really easy… whether you are being formal or informal, whether you are replacing singular or plural nouns, whatever their grammatical value may be… it’s always “you”!

Unfortunately, it’s not so in French. Let’s see the logic of “you” in French.

2 – Formal and Informal “You’s” in French

The first distinction we have in French – which you don’t have in English – is whether the “you” you want to replace is:

3 – Singular and Plural “You’s” in French

The second distinction we make in French is whether you are talking to one single person (singular) or several people (2 or more : plural).

Now, each time you want to use “you” in French, you’re going to have to first ask yourself these questions:

Finally, you’ll have to choose the correct “you” according to the grammatical value of the noun you want to replace.

This may look overwhelming, but I promise you that with the right training, you will get there pretty fast. I helped thousands of students get there, and now they hardly think about it: closing the right French you comes naturally to them.

“You” and all the French subject pronouns are explained in depth in my French beginner audio learning method.

Now that you understand the difference of logic between French and English, let’s see how to translate “you” in French.

5. How to Say “You” in French = Talking to Several People = ALWAYS Vous

Good news! There is just one way to say “you” in French when you talk to several people : it’s “vous”.

No matter whether you are being formal or informal. No matter the grammatical value of the noun “you” replaces.

When you talk to 2 people or more, you’re going to use “vous”. How convenient!

Now, let’s see how to translate in French a “you” singular. So when you use “you” to talk to one single person.

Remember when I said you should ask yourself whether the “you” replaces one single person or several people? I also talked about formality… Let’s take a closer look. 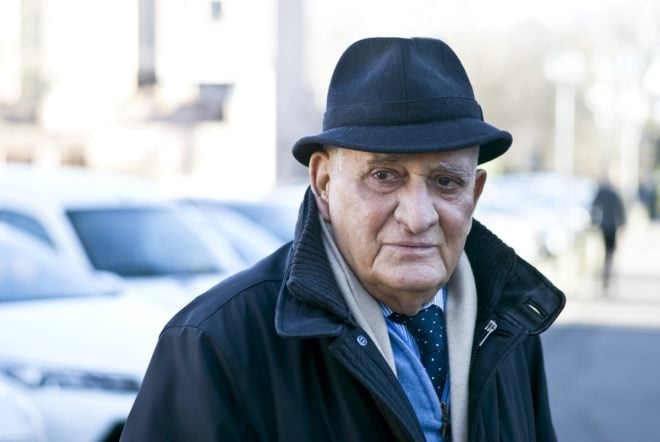 Typically, this is the “you” used among professional adults, or with someone (much) older than you.

It’s also the “you” a child uses with an adult (usually outside of close family).

Now let’s take some examples: remember the situation! You are talking to one single person, in a formal environment: your elderly neighbor Monsieur Dupont, or maybe a business client…

For the next 4 you’s in French: tu, toi, te and t’, the situation is INFORMAL. 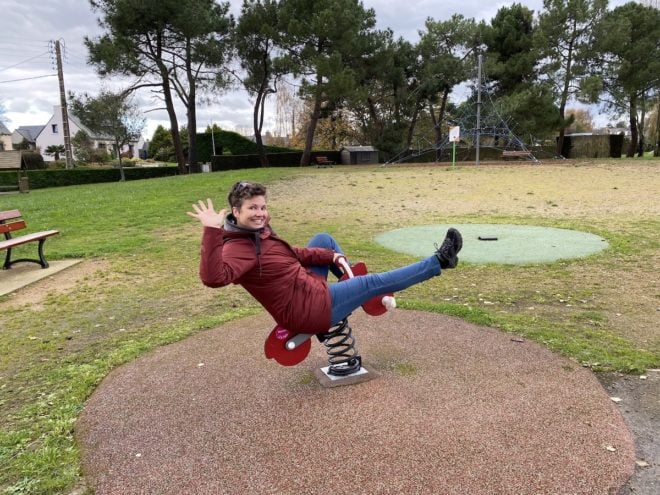 Now, you are NOT talking to your elderly neighbor Monsieur Dupont.

You’re talking to a close friend, a close family member, maybe a child, or maybe someone you work with but your work environment is relaxed, informal, so you are in an informal situation.

In this picture, it’s me being silly… You can see it’s 1 person in an informal setting.

To understand “you” in French, it’s essential you picture the situation clearly in your head.

Use an image, and attach the words below to a situation rather than the English words. Visualise it.

When “you” (singular informal) replaces a subject, we’re using the word “tu”. Find out what’s a subject in this article.

Here is my article on French subject pronouns.

When the grammatical value of the “you” (singular informal) that you want to translate is an object pronoun, we use “te”. (Object pronouns are explained in my intermediate French learning method)

Je te donne mon livre
I give you my book

When that “te” is followed by a word starting with a mute h or a vowel, it takes “elision” (explained in my beginner French learning method) and become t’.

Je t’aime
I love you, I’m in love with you

So now, let’s enter a deep French question any student studying French has asked: how to you choose between Tu and Vous?

First, it’s a question of ‘number’ = are you talking to several people?

In that case, you’d use “vous” for sure. No need to guess here.

But when you are talking to one person (so a singular you) you’ll have to choose between “vous” and “tu”.

The choice depends on how well acquainted you are with the person (family, friend, acquaintance or stranger), but also on many more factors:

I could write pages on the subject of “tu” versus “vous” in French. The cultural differences as well as the grammar and specific vocabulary are all explained in depth, with many examples, in French Today’s audio lesson about Greetings and Politeness, which I encourage you to check out.

Unless there is a large age difference, when someone says “tu” to you, you can “tu” him/her back.

If you don’t know, go for “vous”. Better be overly polite than sorry…

You may not be familiar with this, but the French actually have verbs to say “to use tu” and “to use vous”:

They are often used in the reflexive form : se tutoyer, se vouvoyer.

Now, the thing students of French don’t always realize is that the choice between “tu” and “vous” is not a fixed one. You can start with “vous”, and then move to “tu” as your level of friendship evolves, as you grow older, or should the context get less formal.

Going from “tu” to “vous” is extremely unlikely: once you say “tu” to someone, this person stays “tu”.

Nowadays, with time, most non-business relationships would eventually move from a “vous” to a “tu” status.

It was not so before, when higher social classes would stick with “vous”, even among friends and sometimes even family members.

But now, only an important age difference may call for one person using “vous” (the younger one) and the other using “tu” (the older one). Other differences (gender, social class) would be considered quite old-fashioned or even snobbish.

The thing is when one person offers to say “tu”, it’s extremely impolite to refuse. Like someone offering his friendship and you saying: “no thanks, I’d rather keep things formal between us”.

So, a positive answer is very much expected, and the contrary would be extremely surprising, rude even.

Yet, a French person would know better than to venture asking to switch to “tu” when it was not appropriate to do so… This may prove much harder for a foreigner!

There are kind of French etiquette rules around who should make the switch from “vous” to “tu”:

If it’s an older man and a younger woman, it’s complicated. That’s where you should play it by ear… It often boils down to a simple thing: could there be any romantic interest between the two person involved? If yes, it’s the woman who chooses between “tu” and “vous”. If not, age is the determining factor.

When the two people have the same age and are the same gender, then there is no rule on who should break into using “tu”.

So now, let’s see some typical sentences actually used to switch from “vous” to “tu” in French. 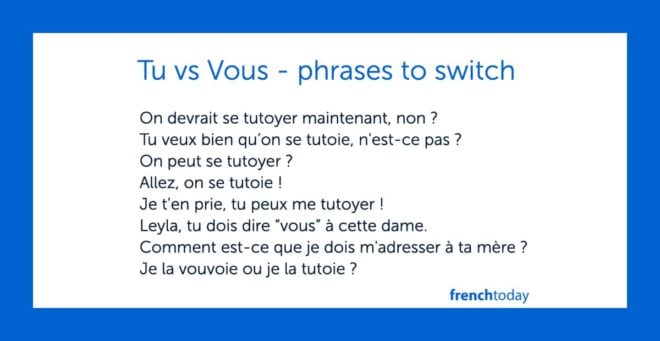 Actually, usually there is not even a need for a question. One person starts using “tu”, or both people are in presence of a common friend they say “tu” to and then everybody says “tu”…

Asking to switch from “vous” to “tu” is actually a pretty formal act on its own (and not so useful since I just said you can expect a positive answer).

Here are some examples of phrases you could use/ hear to transition from “vous” to “tu” in French.

15 – What Should You do if the French Person Keeps Using “Vous”?

If the person you are talking to keeps on using “vous” although you agreed to use “tu”, it may be a sign that they were not ready to break into a “tu” relationship…

You need to be subtle about this and see if this is just a question of time needed to break from an old habit (some people just have a harder time using “tu”, often because of their familial education), or if the person is smoothly trying to make a point. Then adapt accordingly.

For example, a woman can use “vous” to discreetly keep some distance between her and a man.

A work colleague may want to keep the relationship strictly business.

“Tu” and “Vous” are quite powerful indeed…

People often ask me how they should address God in French: tu or vous?

Nowadays, it changes. Some people use “tu”, some use “vous”. It’s a matter of personal choice.

The best way to really understand the subtleties of the French yous is to get many examples, and see in what context they are used.