Today, I am going to talk about a vast subject: French pronouns. I can’t cover it all in a blog post, but I will explain the pronouns clearly and point out some difficulties.

First, let’s see how to pick the right French pronoun.

A pronoun is a small word which replaces a noun.

Or, I could replace “Tina” and use a pronoun, in this case “she”.

Because in this sentence, “Tina” is the grammatical subject.
So I need to pick a subject pronoun.

How to Pick the Right French Pronoun?

Understanding the value of the word the pronoun will replace

First, you have to figure out the grammatical value of the word you want to replace.

Qui + verb is the grammatical question you ask to figure out the subject.
Since “Tina” answers “qui + verb”, Tina is the subject.

Therefore, I will choose a subject pronoun to replace Tina.

Tina is feminine, singular, a third person (she).
So what would “she” be in French?

“She” would be the feminine singular pronoun: “elle”.
If you don’t understand “feminine & singular”, read my article about French number and gender before you continue reading this article

Important: we don’t have a special “it” form to replace a car, a book etc… in French. Everything is either masculine or feminine, so “il” or “elle”.

There are emerging French “neutral” pronouns for human beings being used mostly within the LGBTQ+ community, such as “iel”, but it’s not common practice yet.

The key to understanding French pronouns

This is often the biggest problem English speakers face when dealing with pronouns. They don’t know how to figure out the grammatical value of the noun they want to replace.

In English, there are not so many pronouns.
The choice between “she” or “her” or “hers” comes naturally to your ear.

It takes about 10 years for a French kid to master all the different French pronouns: they mostly learn by repetition, although they do also spend years learning the theory in French class.

Ideally, kids learn pronouns by repetition and correction: their parents and teachers keep correcting their mistakes, and then the kid develops an understanding of what pronoun s/he should use in different sentence structures.

So, you may be able to learn the French pronouns by mimicking French sentences featuring pronouns (with audio of course), like French kids do. But unless you have someone constantly correcting you, this way not be the best nor the fastest way.

Actually understanding the logic behind why we use this or that pronoun will be a tremendous help to understanding French pronouns. This “logic” is called grammar.

To really understand French pronouns, I suggest you get my intermediate French learning method, which will clearly explain French pronouns to you, in a logical and gradual way, with many examples and exercises.

The pronouns are then featured within the context of a low intermediate story.

Now, in French, you have many kinds of pronouns.

This lesson will give you essential pointers, and offer simplified explanations: I cannot explain all the subtleties of French pronouns in one article when entire books are written on this subject!

I will however focus on what usually confuses English speakers.

What is a Subject Pronoun?

No Special “It” Pronoun in French

We don’t have a special “it” form comparable to the English “it”.
Everything: objects, concepts, animals, people are either a “he” or a “she”. This is a difficult concept for English speakers to grasp at first.

You’ll find some expressions that use an impersonal object pronoun like “il pleut” (it’s raining) but they are expressions, like idioms. We’re far from the English “it” used to replace a car…

Note that in stress pronouns, LUI is used only for MASCULINE singular, and also carefully learn the plural masculine EUX – pronounced like the “e” in “je”.

The stress pronoun for “on” is “soi” but it’s not very used in French.

Subject and Stress pronouns are thoroughly explained in chapters 1, 2 and 9 of my downloadable French audiobook À Moi Paris Level 1. I use many examples and then feature the pronouns in a beginner level bilingual story.

The key to figuring out French direct and indirect object pronouns

As I explained in the first paragraph, the key to figuring out what pronoun you should use to replace a French word is understanding the grammatical value of that word.

In order to do that, you will ask a very specific grammatical question.

Your grammar questions are:

Now let’s take an example, it will make much more sense this way.

Once you’ve found the word you want to replace, you choose the right pronoun in the list of pronouns. Look at it as a fun mind game!

So for my example, “les fleurs” is replaced by “les”
= Tina les donne à Paul.
Tina gives them to Paul.

So for my example, “à Paul” is replaced by “lui”
= Tina lui donne les fleurs.
Tina gives him the flowers

Important:
Note that for both object groups, me, te, nous, vous are the same.

So the pronoun only change between le, la, l’, les, lui, leur.

Object pronouns usually go right before the CONJUGATED verb (after the”ne” in the negative), and there are lots of glidings in spoken French (use my French audiobooks to get accustomed to understanding spoken French).

You can use several object pronouns in the same sentence.

Except for the imperative mood, the order will be the following :

Obviously, this is just a shortcut: you cannot learn your pronoun order with a list like that!

You need to practice a lot so this order becomes second nature to you. Glidings are super strong over these pronouns, in particular the ones ending in “e”, so stay focused on the context since lots of time, one pronoun will disappear in spoken French when people don’t enunciate…

Other Types of French Pronouns

The French pronoun Y and En

The French adverbial pronouns Y and En follow the same kind of logic. For each pronouns there are 2 main points to understand.

More about the French pronoun en – with audio.

More about the pronoun Y in French in my free lesson with audio.

Demonstrative pronouns – this one, that one, the one[s], these, those in English – refer to a noun which was previously-mentioned in the sentence.

Possessive pronouns – mine, yours, his, hers, its, ours, theirs in English – refer to a noun which was previously mentioned in the sentence.

Tu veux que je te prêtre mon livre ? Non merci: j’ai le mien.
Would you like me to lend you my book? No thanks: I have mine.

Indefinite pronouns are unspecific and are used in place of nouns.

Relative pronouns are difficult to explain because they depend on the grammatical fonction of the word they replace. And translating won’t work because we’d often use a relative pronoun in French when we’d use none in English.

Now that I’ve listed the different kind of pronouns, what I would really like to get into is why French pronouns are confusing for students.

What is really Confusing About French Pronouns

French pronouns are confusing because the same words have different values:

Nous and vous are the form for almost all pronouns: subject, stress, object, reflexive, etc… pretty much any pronouns except for the possessive pronouns.
So if you have to write a French essay, do it at the nous or vous form, you won’t have to stress much about your pronouns!!

Lui may translate as:

Leur may translate as:

“Que” may be translated as what or that or who…
Que fais-tu – what are you doing?
La fille que je regarde – the girl (who) I’m looking at.
La voiture que Pierre veut – the car (that) Pierre wants.

To understand the difference between direct and indirect object, it’s interesting to take a closer look at your French verb.

You may find this list of French verbs followed by the preposition à  useful.

So the best thing to do is to drill with these French verbs and “lui & leur”… je lui téléphone, nous leur vendons….

As I said earlier, I cannot cover all the subtilities of French pronouns in one article… It would take entire books. But here are some remarks I hope will help you understand the French pronouns better.

Note that the COD may be a thing or a person, an animal… So animate or inanimate.

The COI is most of the time an animate being (a person or an animal).
It can be an inanimate thing like a company (inanimate… but still made of people), but it’s very unlikely that it would be a chair for example… Of course one can always imagine crazy scenarios like in the movie Cast-Away when Tom Hanks talks to his volleyball… 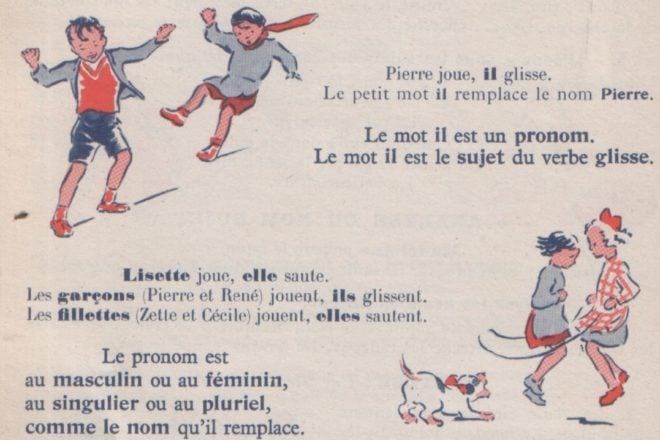 I don’t know whether what I am going to say next is going to help you or confuse you. However, give it a try, and if it doesn’t help, then immediately forget about it.

Of course, these are shortcuts, I’m sure you’ll find examples where this doesn’t’ work.

Direct, indirect, object, and stress pronouns have kind of the same value. They have to do with “who” the subject does an action to.

And in French, the preposition is the key.

For what it’s worth, here is the list of French pronouns. This way you’ll have the correct terms and you can look more into it if you want.

I’ve included a translation… I don’t like to do it because there are many translations possible for these French pronouns. I hope that if you remember one thing from this guide is that translating pronouns from English is unlikely to work!