To understand French possessive adjectives, focus on what you’re describing: UN chien, UNE chienne, or DES chiens? Whether YOU are a man or a woman is not important.

I’ll use an example to explain French possessive adjectives. Her dog.

To master French possessive adjectives, you need to focus on the dog!

1 – What is a Possessive Adjective ?

A possessive adjective is a word that says to whom something belongs.

This is her dog.

In English, there are seven possessive adjectives.

In English, wether the dog is a female dog or a male dog, or even if there are several dogs doesn’t matter at all.

What matter is the subject. The person to whom the dog belong : the owner of the dog(s).

2 – For French Possessive Adjectives, Focus on the Dog!

In French, it’s similar and different at the same time.

You still have to choose who the owner is: my, you, his etc…

But then what matter is whether the dog is a male dog (masculine) or a female dog (feminine), and whether there’s one dog (singular) or several dogs (plural)

For example, when you talk about a woman’s male dog:

I understand this is very weird for an English speaker.
You need to change your focus.
In French, you need to focus on the dog! 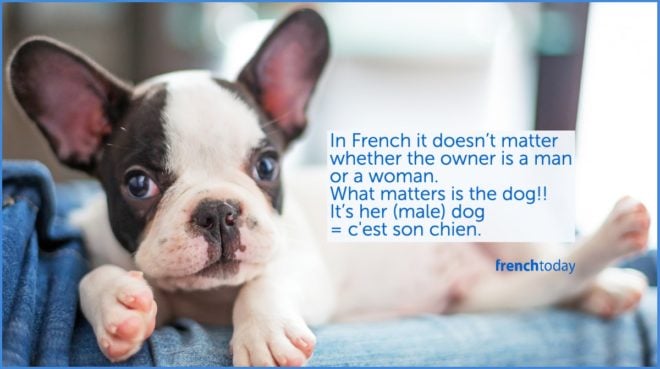 By the way, here is my complete French dog guide!

Unlike English, each French possessive adjective has two or three forms.

4 – What is the French Possessive Adjective For the Pronoun “On”?

The possessive for “on” depends on the meaning of on.

5 – How to Choose the Correct French Possessive Adjectives

Only one will match the situation though.

You need to ask yourself 2 questions:

First figure out the owner.
Do you want to translate “my, your, his, her, its, our or their dog/s ?”

B – Analyse the Dog!

That’s what you need to change.

Remember – the owner doesn’t matter. Stay focus on the dog!

In other words, let’s say that we are talking about one male dog.

C – Every French word has a gender

In French, every word has a gender…

You need to know the gender of the word you are describing to choose the correct possessive adjective in French.

I understand it’s not easy.

Practice does it though. The best way in my opinion to master French possessive adjectives is to visualize the situation and link the French words to the situation, not to the English words.

Study possessive, demonstrative, interrogative and regular adjectives, memorize them in the context of a bilingual French story and master their pronunciation with my intermediate French audiobook method.

4 – Watch out for ses and leur

This is a mistake I hear too often: “ses chiens” to say “their dog(s)”.

5 – Watch out for the “Mutant” French Possessive Adjective

When a feminine word starts with a VOWEL or a mute H, you won’t use “ma, ta, sa” BUT “mon, ton, son” (the masculine form) for a reason of pronunciation – to avoid a clash of vowels

In other words, dont’ say “ma amie” but say “mon amie” – even though the word amie is feminine – with a strong liaison in N [mon Namie].