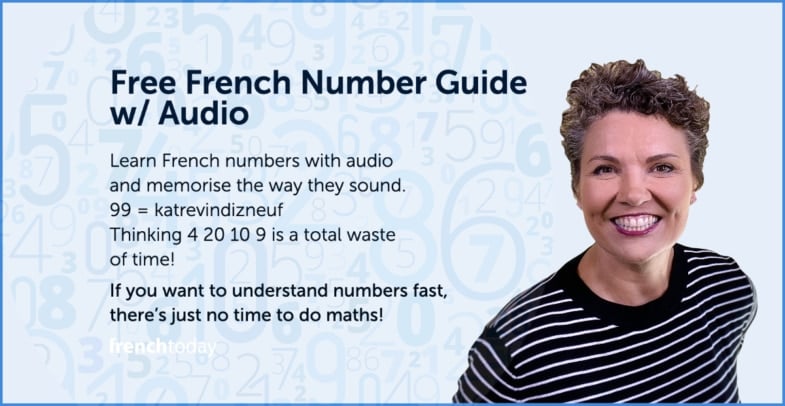 Learn how to count in French from 0 to one billion + fun French number quizz. Learn the right French numbers pronunciation and gain speed and reflexes.

In this free audio lesson, I’m going to help you conquer French numbers. You’ll see, it’s easy when you study the right way!

Most students “calculate” their numbers in French: they think “twenty” and “five” to make “twenty five”.

But that is not how a French native would think. A native is so accustomed to numbers that “twenty five” is one piece of information and one sound.

Learn your French numbers this way, and you’ll see, big or small, numbers in French will no longer be a challenge!

Learn How to Count From 0 to 19 in French

Please press on the audio player to hear the audio recording for the French numbers 0 to 19.

Now let’s see the pronunciation of each number individually. This time you may look at the way they are spelled so you memorize the spelling at the same time.

“Un” to “dix-neuf ” are weird numbers. You really need to know them inside out if you want to eventually understand and handle large French numbers.

In my experience, students have problems with large numbers not because of the “big” part (100.000) but because of the smaller “last” part that they don’t understand fast enough.

0 to 19 in French Explained

Click the blue text next to the headphone to hear me say that word or sentence in French.

Don’t forget to put the noun that follows in the plural if you have more than one:

When pronouncing these four digits, you usually drop their final consonant in front of a word starting with a consonant (but not always…)

This is particularly important since this pronunciation will apply in larger numbers, when 5, 6, 8 and 10 are followed by hundred (cent) thousand (mille), million (million) milliard (billion) etc…

To learn numbers efficiently, always learn them out of order. (Just like when you drill with the French irregular verbs… When you learn in order, your brain prioritizes the info: first most important, last: less important.)

Let’s test your French numbers with this out of order drill. We’ll start with a a slower number drill. Please press play on the audio player to hear my recording.

Now let’s drill our French numbers at a faster speed.

Before starting this lesson, you may want to check your present understanding of French numbers.

I’ve developed a fast and fun quiz for French numbers: the test has 10 questions and will take you about 8 minutes to complete. You’ll see how different it’s to take a test based on audio recordings and not written French!

Now let’s dive into this rather long lesson about French numbers! You don’t have to do it all in one sitting! Take your time, bookmark this page and come back often!

Please press play on the audio player to hear my recording.

These French numbers 20 to 59 seem easier and therefore are often overlooked by students.

Big mistake! You need to train with them as much as with the other numbers – they are part of telling the time in French, and are very important.

As with everything in French, repetition is the key. Take you time to go through these numbers: bookmark this page and come back often to train on your French numbers!

Now let’s train with French numbers out of order at the faster speed. Please press play on the audio player to hear my recording.

This 4+ hours audiobook goes in-depth on how to construct the numbers and how to pronounce them properly with all the modern glidings and elisions that can sometimes completely change the number from its written form!

I also cover many French expressions that use numbers as well as the many ways to tell the time and say prices.

All throughout the audiobook, you will find extensive audio drills recorded at 3 different speeds and featuring numbers out of order so you really get a true workout!

As with all my French audiobooks, it’s available on all platforms with a single purchase and comes with 100% money-back.

Please press play on the audio player to hear my recording.

These French numbers are really ridiculous, but it’s essential that you don’t “build” them but learn them phonetically 99 = [katreuvindizneuf].

The problem is that most students think Quatre-vingt-dix-neuf = four – twenty – ten – nine and therefore “build up” their French numbers.

It may work when you are taking a written test, but not if you are learning French to communicate, and need to understand prices and numbers in a conversation.

Eighty and Ninety in French

Note that eighty in French – quatre-vingts ends on a silent S, but not the following numbers (quatre-vingt-un).

Some French speaking regions (Switzerland, Belgium…) have found a solution for these pathetic numbers: they use:

which, in my opinion, makes so much sense!!

Unfortunately, we don’t use these numbers at all in France.

And now let’s mix-up the French numbers sixty to ninety-nine and test your understanding of them out of order.

And now let’s mix-up the French numbers sixty to ninety-nine and test your understanding of them out of order at a faster speed. You will need to hit pause if you are writing down these numbers in words.

Since larger numbers are going to be grouped in three digits, you need to be comfortable with numbers in the hundreds to be able to understand all large French numbers fast.

S or no S After Cent in French?

When “cent” is not followed by any other number, you’ll add an S starting at “deux-cents”.
Trois-cents, cinq-cents…

However, if it is followed by another number, then there is no S.
Trois-cent-quarante-deux.

The S would be silent, but pronounced Z in liaison if followed by a vowel or a mute h.
Huit-cents ans.

Just like I explained before, the French digits 5, 6, 8 and 10 drop their final consonant sound before another consonant.

This rule applies to the pronunciation of French numbers in the hundreds, so with cent:

Watch out. Do not mistake the English word “cent or cents” with the French word “cent”.

Let’s test your understanding of French numbers in the hundreds with this French number audio exercise. First, let’s drill at a slower speed.

Thousands & Above in French

How To Say Huge Numbers in French?

You have to be careful with the word “billion” that doesn’t translate the same way in French, US/Canadian English and British/Australian English…

Note that these numbers, although written “ill” which usually makes a Y sound in French, keep the “il” sound of the exceptions “mille villes tranquilles” (see Secrets of French Pronunciation)

For even bigger numbers, I encourage you to check out wikipedia

Most people (myself included!) have trouble reading a number over six digits, so it’s normal to read it somewhat slowly.

Let’s see how to spell the numbers above a thousand in French.

One or No One Before Large French Numbers?

When talking about “one hundred” or “one thousand” in French, we don’t say the “one”, we only say “cent” and “mille”.

However when talking about “one million”, “one billion” we do say the one: “un million, un milliard”.

S or no S After The Large French Number?

De or no de After Your French Number ?

When “mille” is followed by a noun, there is not “de”:
Deux-mille Euros.
Quatre-mille ans.

When million, milliard etc… are followed by a noun, there is a “de” (or a d’).
Quatre-millions d’Euros.
Six-milliards d’années.

Just like I explained before, the French digits 5, 6, 8 and 10 drop their final consonant sound before another consonant.

You group your number by digits of 3, dividing your groups with the words mille, million, milliard…

So you need to develop your ear to focus on these “separating” words so you can get the whole number.

So, if you want to master very large French numbers, you need to drill a lot on numbers of three digits (so up to 999) since these numbers will form the blocks for larger numbers.

Now let’s train with French numbers over one million!

How To Learn French Numbers

Use my audio recordings to memorize the numbers in French.

How to Write French Numbers?

The rule has changed in 1990. Before, an hyphen was used only between some numbers.

Now, you may write hyphens between all the digits of one number, although both spellings are still accepted (source http://www.question-orthographe.fr/question/le-trait-dunion-dans-les-nombres)

Here again, the rule has changed.

A period was used to separate the digits of larger French numbers.
Exemple: 300.000.000

However, we still use a comma where a period is used in English, like for prices.

Uppercase or Lowercase For French Numbers?

Voilà. I hope this lesson helped you. Check out my French number audiobook. Over four hours of clear explanations, and random number drills recorded at several speeds – including much faster speeds than in this lesson. As with all my French audiobooks, it’s available on all platforms with a single purchase and comes with 100% money-back.

If you liked this article, please share it! It’s a huge help for us. 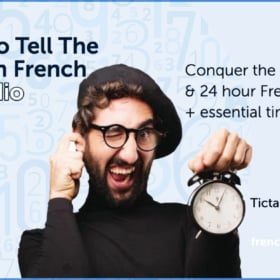 ⏱ The Time In French w/ Audio