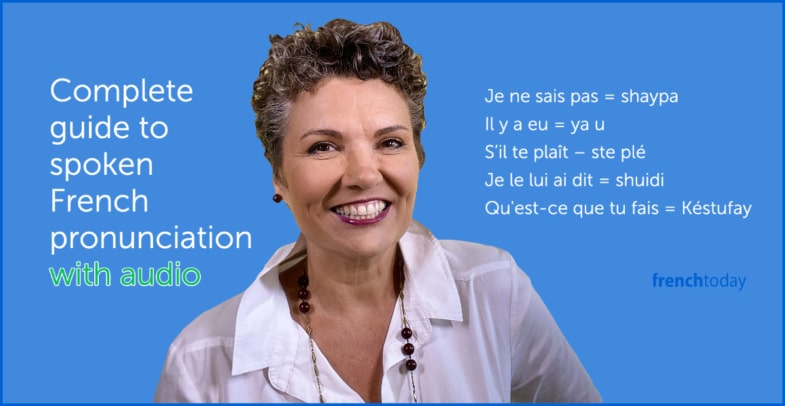 I’ll explain in details the differences between today’s modern spoken French pronunciation, vocabulary, sentence structure… vs traditional French and point you to a medium way of speaking which should greatly improve both your understanding and pronunciation of the contemporary spoken French language.

This article comes with audio. I’ve recorded the French examples for you: please press on the audio player to hear the recordings.

Many students learn French pronunciation in school: although this has been changing lately, French language classes traditionally have a strong focus on grammar, written French and literature, with a few chances to speak French in conversations.

The way we speak French in France today affects the French Pronunciation, the French language vocabulary and even the French grammar and the sentence structure.

In this article, I will give you many example of modern spoken French sentences, and will point out the modern French pronunciation.

But first, let’s see why modern spoken French is not traditionally taught in schools (although this is starting to change).

2 – Why is “Real” Spoken French Pronunciation not Taught in Classrooms?

Modern Spoken French pronunciation is usually not taught in classrooms simply because it is considered “poor” French.

Lots of scholars look down on the evolution of a language, and deeply believe that any evolution is actually a retrogression, and weakens the language.

Even if they wanted to teach modern spoken French, French teachers would face a big problem since they have to cover a strict curriculum in a limited amount of time. Once the poor French teachers are done explaining the French verb conjugations, there is hardly any time left anyway!

Most teachers actually complain that their (often imposed) French curriculum concentrates too much on written French. Actually, if the French teachers could focus more on French pronunciation, students would realise speaking French is not as complicated as they think it is – speaking French is definitely easier than writing French!

I won’t enter the debate of whether spoken French should be told in schools. All I know is that modern French is a reality, and if you want to understand real French people or aim at sounding French yourself, you need to study spoken French and prepare your ear for the modern French pronunciation.

The modern French language pronunciation is quite far from traditional French.

Please press on the link next to the headphones to hear my recording of this sentence.

Spoken French pronunciation depends a lot on the context, the person you are talking to, your and their age, regional accents, whether you are trying to sound smart or cooooool…

Modern spoken French is not considered “pretty”. Especially by people who love French, linguists, teachers, people from higher social classes… But it is the reality of French today.

This is why all of French Today’s audiobooks are recorded at several speeds and levels of enunciation. Nobody else does this.

Now, let’s see what some common spoken French glidings are.

Please press on the audio player to hear my audio recordings.

B – The Ne Disappears in Modern French Pronunciation

This is a medium gliding. Actually in French nowadays, it would be extremely rare to pronounce the ne without gliding it a bit.

So, I strongly encourage you to apply this medium gliding.

Now, in reality, most of the time in spoken French, the “ne” and even the “n’” totally disappear.

This is very, very common in spoken French now. If I add this to what I explained above about modern spoken French, let’s see how the verb “parler” in the present indicative negative would be pronounced in a very glided spoken French.

Please press on the audio player to hear: 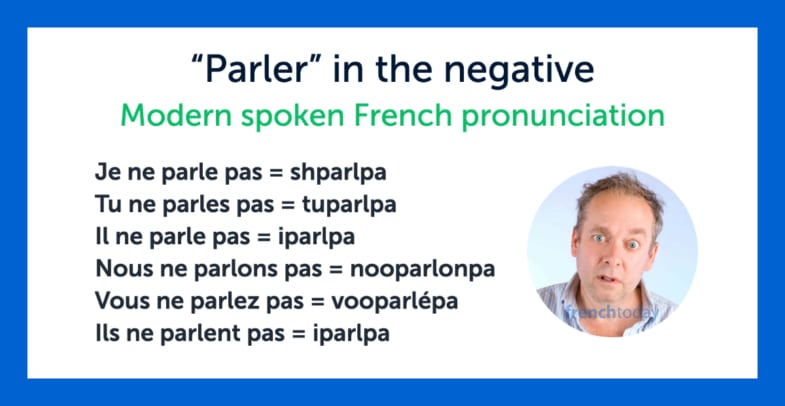 The pronunciation of the short French words ending in “e” differs a lot in spoken French and traditional French.

A – What’s the Pronunciation of”Il y a”?

“Il y a” is probably the common French word where the modern French pronunciation is the most blatant. And this often comes to a shock to poor students of French who were never prepared for that!

Please click on the audio player to hear my recording.

I let you follow the link to an article about the modern glided pronunciation of the French object pronouns le, la, les, lui, leur (this article comes with audio).

The modern pronunciation of French politeness expressions will probably surprise you.

6 – Do YOU Need to Speak Modern French?

In my opinion, a student of French could lean towards a more enunciated, classical way of speaking French.

This being said, you absolutely need to understand modern French since it is the reality of how most people speak French today.

Sometimes, you’ll even see spoken French in writing. It’s the case for French comic books and texting in French (yet another kind of French language but highly based on spoken French pronunciation).

Let me give your an example: 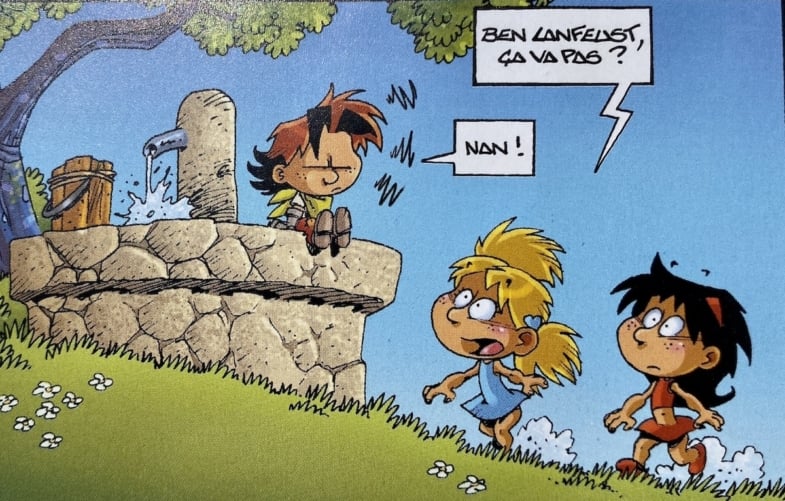 In the picture above, you’ll see good examples of French that would totally stumble French students.

“Ben” is a common French sound, something you’ll hear a lot like “hum”, “well” in English. It doesn’t translate and usually isn’t featured in classical textbooks. French students don’t know what is means – or that actually it doesn’t mean anything!

“Ça va pas ?” No “ne”. No inversion or “est-ce que”.
Lanfeust is a “cultural reference”… It’s the name of the boy who is the hero of a huge series – actually several series – of French comic books.
“Nan” instead of “non” – a common way to say no in French.

Of course, there is a strong base of French vocabulary which is unlikely to change much.

Let me be clear: modern French is not limited to slang. Slang is a small part of modern French, but for example I speak a current, modern French language and I use modern spoken French pronunciation, but I don’t use much slang!

On top of the traditional French slang, called “l’argot” French students now have to cope with a new type of spoken French vocabulary.

I invite you to first read the examples and then listen to them with my audio recordings (at the bottom, after #D)

A – Examples of modern French slang

8 – Are You Learning The Right French Vocabulary?

And this is only for the vocabulary part…. Now let’s see how French grammar changes when we speak French.

In modern street French, it’s very, very rare to use inversion. Instead, it’s the tone of your voice that shows we are asking a question: we just say the statement, then we raise our voice.

Now let’s see how even the classical French word order gets affected when we speak French.

Something else that changes in spoken French is the the typical word order: I can’t really explain it, but we either use pronouns to reinforce the subject, for example:

Or we feed the info in chunks, without many linking words, as to feed the brain the most important facts first. For example:

See how in spoken French, you got the key info very clearly:

It would be extremely hard to teach a French student to mimic these constructions, as there are no rules per se. It’s our French ear that would tell us if it’s possible or not. Yet, the word order is not totally random: I couldn’t move the “word blocks” in many different ways…

So, here again, I don’t suggest you speak this way necessarily. But you need to be able to understand it and therefore learn with a Frenchmethod which shows this to you.

My French test is entirely audio based: all the questions will be presented to you as a recording, and then after each question, you’ll have an answer which I’ve also recorded.

Voilà, I hope you now understand more the difference between modern spoken French – the French you’ll actually hear when you go to France and in modern French movies – and the overly enunciated “textbook” French that you’re likely to have studied with traditional French learning methods.

Both are part of the reality of French today.

I suggest you check out my French audiobook method to learn French the smart way today.