11 Solutions to Improve Your French Speaking

I understand it’s not that easy for adult students to develop the confidence needed for speaking French out-loud.

Finding the guts to speak French out-loud is a common problem for adult who are studying French.

It takes a lot of courage and humility to express yourself in a foreign language. Furthermore, many students mostly study passively with French written methods, and don’t have the opportunity to speak in French themselves.

So what’s the best way to improve your French speaking skills? Here are eleven precise solutions.

Table of Contents
What’s the Best Way to Study French for Speaking?
4 Steps Method to Improve How You Speak French
Speak French To Your Cat
Practice Talking Out-loud With a French Q&A
Speak French To Your Smartphone
Ideally, Find Someone to Practice Speak French
Translate From English to French
Visualize the Object, the Situation – Don’t link to English Words
You Cannot Avoid French Grammar
Learn The Verb Conjugations “Out Of Order”
Repetition is the Key
Ultimately you Need to Talk Faster

What’s the Best Way to Study French for Speaking?

If you are familiar with my site, you know how much I emphasise that the French we write and the French we speak are like 2 different languages. This is why to improve the way you speak French, training with audio is a must.

Choose a text you understand mostly, maybe something you already studied some time ago, so the vocabulary is mostly known to you, and repeat it out loud, trying to mimic the speakers’ pronunciation, flow, intonation.

To improve the way you speak French, repeat out loud a short text featuring audio, recorded by a native French speaker and featuring grammar and vocabulary you do understand – so you can then reuse it in conversations.Click to Tweet

You can guess some words out of the context, but the idea here is not to train your understanding capacity, but train your speaking ability!

Studying with a French story that’s right at your level will allow you to focus on your French pronunciation, memorize common sentences and expressions, and finally get the courage to speak French out loud.

Now let’s see how to improve your French flow in four precise steps.

4 Steps Method to Improve How You Speak French

Speak French To Your Cat

Too many people only speak French in their head, and never dare to utter a French word out-loud. But if you want to improve how you speak French, you actually need to speak up.

If you don’t have a French language partner, speak French to your pet! Most students only speak French in their heads. Your pet will never juge you, makes an excellent listener and at least, you’ll be speaking French out loud!Click to Tweet

Of course, finding a human French language partner would be ideal… but for many people, it’s not that easy.

So consider speaking French to your cat, your dog, your goldfish! Pets make excellent listeners and will never juge you or make fun of you and will be happy to listen to you whenever you feel like speaking French. 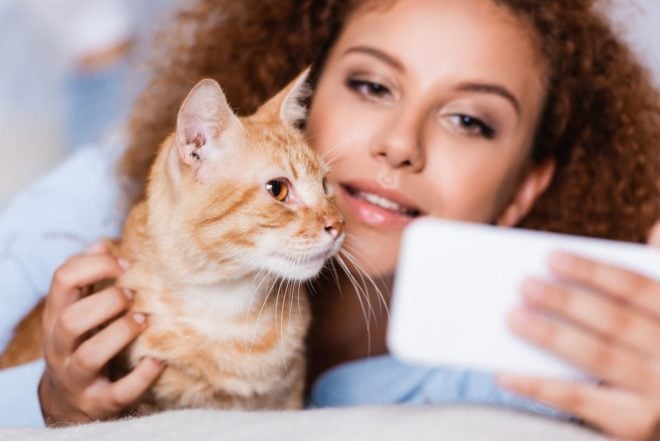 Now that you are getting accustomed to hearing your own voice in French, you are ready to tackle a more serious French speaking practice.

A great way to practice speaking French out-loud is to ask short questions on a text and answer them.

Do speak out-loud. If it’s just in your head, it doesn’t count!

For example, you can use the Q&A I developed to accompany my French audio novels, like the one in “Une Semaine à Paris – a traveler’s guide with a novel twist”.

Speak French To Your Smartphone

You may also try to use the voice recognition software of your mobile device to dictate things in French. You can switch the language to French, and record your own text this way.

However, if your pronunciation is not right, the software won’t recognize the word. It can get frustrating since you’ll have no one to tell you what you should be saying… But at least, it will help you figure out if you French pronunciation is good.

If you dictate to your smartphone, knowing how to say French punctuation and other writing commands in French will help: here is a link.

You can also use your smartphone to record yourself and check your French pronunciation to the same text spoken by a native French speaker. It’s brutal! but it should help you figure out what needs to be improved in your French accent.

The very best solution would be to find someone to converse with you in French and correct your mistakes. No software or recorded lesson can do that. It needs to be a real person.

This investment in a couple of private French lessons (maybe by Zoom or Skype?) can change your French accent for the rest of your French speaking life, or help you figure-out problems you should address as a priority.

Translate From English to French

When memorizing new vocabulary, remember that it’s not because you understand the French word that you could come up with it.

I have seen people approach lists of French vocabulary by looking at the French and seeing if they can understand the English; this is good to build your understanding of French, but not your speaking ability.

Au contraire, you need to look at the English, and see if you can come up with the French.

Making your own French Flashcards are a great way to memorize a lot of vocabulary. Don’t forget to always have an article to go with a noun so you learn the gender as well as the noun.

Visualize the Object, the Situation – Don’t link to English Words

Avoid linking the French word to the English word as much as possible.

When you learn the word “le chien”, picture a dog in your head, and link the French word to the image, not to the English translation.Click to Tweet

Going through another language is a waste of time and effort, and will cause trouble when the French and English don’t follow the same pattern.

French is a very structured language, and you need to understand this structure.

Then you can move on to acquiring reflexes, and have the words come naturally to you.

But at one point, you need to understand how French works, how you must arrange the words to build a sentence. And that is what grammar is.

Learn The Verb Conjugations “Out Of Order”

Typically, French verbs are taught from “Je” to “Ils”.

The problem is that when you memorize something in order, your brain memorizes the order as well. And then you have to go through the whole list to get to the “ils” form…

Instead, write down your subject pronouns, and then pick them at random. Believe me, you’ll gain a lot of speed when speaking. And don’t forget to train in the negative form as well.

Check out my French Verb Drills, they are the best tool to memorize French verb tenses and gain speed.

Repetition is the Key

When you spend time memorizing something, your brain will store it in its short term memory.

Only experience and repetition will store the info in your long term memory.

So it’s better to work on your French regularly, for say 20 minutes per day and do a lot of repetitions, than spend 3 hours on it once a week.

Ultimately you Need to Talk Faster

Once you are at an intermediate level, you need to make the transition from “thinking” the language to talking automatically. Build reflexes.

If you liked my tips on the best way to study French for speaking, you may also like my tips on