My 9 Tips To Make French Flashcards 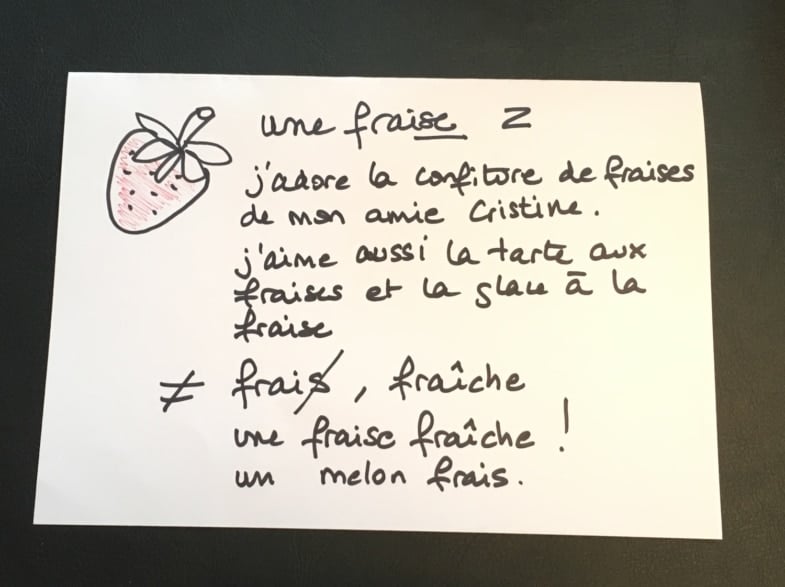 I love flashcards. They are a great way to trigger your memory and learn new vocabulary. Students often ask me “how do you make flashcards to study French?” Here are my tips.

First, let me answer some general questions about making a French flashcard.

A – What is a Flashcard?

A flashcard is typically a piece of paper with one info on one side, and another one on the other side. This way, you can test yourself.

Usually, flashcards are made of strong paper: 1/8th of a page or 1/4th for bigger ones. You can buy some, or cut a piece of paper to the dimension you like.

B – Paper Flashcards or e-flashcards

Nowadays, there are also softwares to make your own electronic flashcards.  Call me old-fashion, but I do like the paper format, and the fact of writing on it. But e-flashcards may work well for you as well – I have to admit they are quite convenient.

C – Do Make Your Own Flashcards To Study French

You will also find already made e-flashcards that you can purchase and download onto your phone, computer… They make for a fun way to learn new vocabulary and often come with games etc…

However, in my experience, making your own flashcard is a big part of the memorization process. Sorting out what you want to write, making your own connections with other words will help you memorize the word much longer.

D – What do You Write on Your French Flashcard?

However, I would encourage you to write much, much more: the flashcard can be a fantastic tool, but it will only be as good as you make it!

In the paragraph below, I will give you precise tips on what to write on your French flashcard: however, keep it somewhat short. You are not writing a book, nor a long list. A flashcard must work in a flash, you should be able to grasp the information just glancing at it, with a minimum of reading: the flashcard’s aim is to trigger your memory.

In the flashcard picture below, I like how the main word is written with a larger pencil: this is the main info. These are obviously SAT flashcards but if they were language ones, say a French person learning English, the French translation would be written on the other side.

The English side then has the main word, a definition (good for advanced students to learn synonyms) and the word used in a sentence + some sort of color coding. It could work fine!

Now, let me give you precise directions on how to make flashcards to study French.

1 – You Must Always Write Noun + Article on a French Flashcard

Firstly, if you are writing a noun, you absolutely need to write the article that goes with, so you know the gender.

You have to memorize the noun with the article: it should form one single information in your head. I see so many French flashcards on the web that do not include articles… It’s a terrible mistake!

Writing other “little words” such as definite, French indefinite, partitive articles, possessive and demonstrative adjectives may help as well.

2 – Write The Particularity of the French Word on Your Flashcard

If there is something particular about that word, such as a particular French pronunciation, a preposition, an irregular plural… make sure you make a note of it.

You may want to cover some words that are associated on the same flashcard – whether it’s by topic, or semantics, or even prepositions used after certain French verbs…

4 – Use the Word in a Sentence on Your French Flashcard

Using the word in a sentence has many advantages: it creates a visual image for your brain, and already connects words that are likely to be used together. Furthermore, I’ll strongly encourage you to make the sentence “close to home”, meaning use a real fact, something that happened, facts about yourself or your friends.

Your brain is more likely to file this sentence as a “memory” rather than something you just made up for the sole purpose of the flashcard, and it will stick with you longer.

If you can, have your French teacher or a native speaker check your sentences – on a forum for example. It would be too bad to memorize a wrong sentence !

To learn French in context, I highly recommend you check out my unique downloadable French audiobooks, featuring different speeds of recording and enunciation, and focussing on today’s modern glided pronunciation, exclusively on sale on French Today.

5 – Work Out-loud With Your French Flashcard

So say the word out-loud, not just in your head.

6 – Work From the English Word to the French Word

I have noticed that when memorizing vocabulary, some students look at the French word and see if they can come up with the English word: this is good to work on your French understanding, but will not help with your speaking ability.

You need to look at the English side of the flashcard, then see if you can come up with the French word – or words if you wrote many things on the French side.

7 – Drawing on Your French Flashcard

If you are learning vocabulary, drawing or gluing a picture onto the English side of your flashcard is a great idea. When you memorize something, it’s best to not link the English word to the French word, but rather link an image, a feeling, a situation.

When you link the English, you waste some time and brain resource: idea to English to French, when you could go idea to French. This is particularly true for children – adults however tend to “translate” everything, which is a habit difficult to break.

Even if you are not good at drawing, you’ll remember what you have drawn and what it means – and that’s the only thing you need!

Some people like to color code their flashcard: green for verbs, pink for nouns… Or use different colors pencils to write on them. Whatever may help you is a good thing!

9 – Your French Flashcard  Should Evolve With Your Knowledge

Your flashcards should evolve with your level – beginners in French should keep their flashcard quite simple : a word, a sentence, a short note maybe.

But as your level in French evolves, so can the complexity of your flashcards : synonyms, specific French verb conjugation, exceptions… be creative and have fun!

As an example, here is a flashcard I did for the word “jeune”. It started quite simple : on the opposite side, the English word “young”, then on the French side, the different forms, examples relevant to my life (I know Zip and Pixel) and a remark.

Then, later, I realized other difficulties about that word: the fact that it ends in a E in the masculine form is weird, and French students often mistake it with the adjective “jaune”. So I added that to the flashcard, as well as its contrary, old.

As of now, my flashcard as still evolved a bit… More pronunciation marks, more vocab.

Keep your flashcard quite short though, don’t write the whole conjugation of a French verb! Your eye should be able to grab all the info on your flashcard, so it works… in a flash!