English vs French Pronunciation in 8 Points 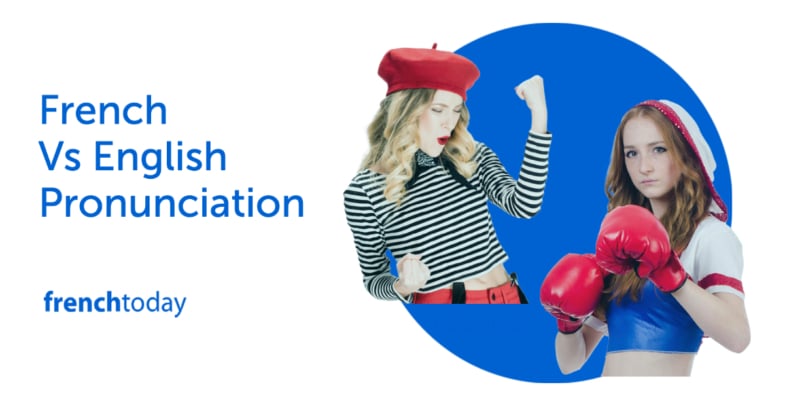 English and French pronunciations share a lot of sounds. Yet the rhythm, intonation, modulation etc… differ. I’ll explain the differences with audio examples.

French and English pronunciations are not that different. By this, I mean English is closer to French than it is to Mandarine Chinese for exemple…

The French and English languages share a lot of sounds. Some sounds sound absolutely different, like the dreaded French R pronunciation…

However, what changes a lot is the rhythm, the tonic accent (or lack of it), the pitch, the modulation… So let’s see in details what to particularly watch out for when you’re an English speaker studying French.

Here, I’m not going to talk about the sounds that are particularly difficult in French for an English speaker, but the general differences between the 2 languages’ pronunciation.

French rhythm is even. All our syllables have the same length, we don’t have a much longer syllable or acceleration within a word, like it’s the case in English.

When a word is long, say it slowly, one syllable at a time, and it will work.

Compare: “a preparaaaaaaaaation” with “une préparation“.
The syllable “ra” is much longer in English .

Example: to conquer and to concur.
Same sounds: the stressed syllable makes the difference.

This is important because many methods will tell you French stresses the last syllable of a word. But this stress is so very light compared to the tonic accent you apply in English that it shouldn’t even be mentioned to English speakers.

Compared to English, there is no tonic accent in French!

In general, the voice pitch of French is on the lower side: a French voice tends to be more low pitched than high pitched.

This is something you can easily change in the way you speak French: try to lower your voice a bit, especially if in English you have a high pitch voice.

Example: to help you understand, I’m going to record this sentence in French, with my French voice pitch.
Then I’ll do my best to say it in English with an English voice pitch :-)

In French, the intonation is quite even: our voice doesn’t go way high nor go way low. Our voice goes up a bit for questions, or to express emotions such as surprise, but nothing compare to English where there is a much larger range of intonation, and people often go up or down with no particular reason.

Here again I’ll take an example in French and English: I’ll record both sentences with emotions. Yet see how in French my range is much smaller.

Because of all the liaisons and glidings, silent letters and even silent words, the French words flow into each other.

English is more clipped in comparison to French. For sure, some words gilde into each other like “what’s going on”, yet there’s much less gliding than in spoken French.

In French, you may breathe a bit after a logical group of words, but mostly the breathing is done at the punctuation marks. which brings me to my next point.

Punctuation is very important in French. I was always surprised when I read out-loud with my English (adult) students to find out most of them didn’t stop at the punctuation marks. In the same paragraph, students would often read one sentence into the next, without stopping at the period for air!

In French, maybe because the French words flow into each other with all the liaisons and glidings, punctuation is super important. It shows you where you can stop and breathe!

French Punctuation is your ally: you can stop for a long time at a period to think about what you’re going to say next. It’s natural in French to stop at a period, and stopping there won’t interfere with the conversation.

In English, the language may be more clipped and the words may run less into each other, but whole sentences do, which to me, is quite confusing: when English speakers speak fast, I don’t know where one sentence ends and the next one starts!

It’s difficult to illustrate this point with an example. Download my free French audiobooks, to get a better sense for the flow of the French language in a conversation.

In French pronunciation, we never do this sing-songy modulation sound that English (in particular British English) often does to insist on one word.

Listen to “roof” and “Ann” in these sentences:

The cat climbed onto the roof!
Ro-oof
Today, with Anne, we went to the supermarket.
Today-ay, A-Ann
I don’t know what’s going on. But Peter is not calling me back!
O-on

So how would we insist on a word you ask? Well, for starters we don’t do it nearly as much as you do in English!

Then, we’d probably exaggerate the word: say each syllable clearly.

Je suis finalement sortie avec Pierre hier. On a passés une soirée formidable.
I finally went out with Peter yesterday. We had an amazing evening.