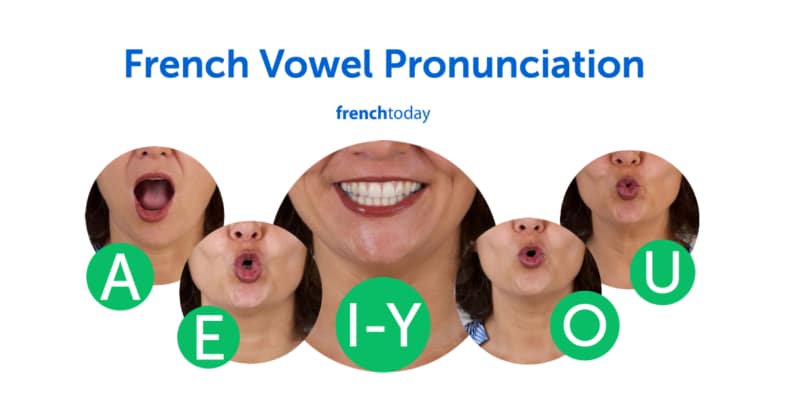 There are 6 vowels in French : A, E, I, O, U, Y (i grec). Yet, letters ≠ sounds. Free audio guide to the French vowel pronunciation, French U vs OU etc…

This free French lesson comes with audio. Please press on the blue link close to the headphone to hear my recording of the French vowel pronunciation and other French sounds.

1 – What Are the French Vowels?

2 – How To Pronounce The French Vowels?

French vowels are strong. So strong that they really stand out in French. French words often end on a vowel sound, even verbs.

I like to say that consonants often “jump start” the vowels. In other words, your lips form the consonant shape, but the air that comes out of your mouth is the vowel sound.
Example: Papa.

French Vowels Tend To Be Stronger Than English Vowels

Take the word Papa. The P doesn’t stand out like in the English word Papa.
On the contrary, it’s the A sound that stands out.
Contrast the French & English pronunciations : Papa (FR), Papa (English).

Example: the French “o” as in “coco” never does the fluctuation of “toe” or even “cow” where your mouth opens and clothes on the o sound.

Sounds cary on air. French vowels need a lot of air. The shape of your lips and the amount of air you let out is the key element to pronouncing your French vowels.

So you need to think about your breathing when you speak French.

In French like in English, letter have a pronunciation of their own.
For example, the letter B in French is pronounced [bé]. In English, it’s [bee].

The French vowels are named after their most “plain” sound. But sometimes, a vowel will combine with another vowel or another letter to make a different sound.

In French like in English, some vowels will combine in writing to make a sound, like in A and Y in “May” / the A and I in “mai”.

Sometimes in French, you’ll have an accent to change the pronunciation of that letter. I’ll write a special lesson about French accents & Pronunciation.

Sometimes in French, a vowel will combine with an N or an M to make a nasal sound. I’ll write a specific lesson about Nasal French sounds like AN, IN, ON...

There’s a way to represent sounds: it’s called the phonetic alphabet. For B it’s easy, it’s [b]… But some sounds have a weird phonetic representation for them, that you cannot guess if you don’t know it.

Many students don’t want to spend the time learning the phoneticalphabet. And although it can be very useful to know it, since audio recordings are so easy to find now, I agree it’s not absolutely necessary to know the phonetic alphabet nowadays.

In this lesson, we’re going to concentrate on the simple French vowels, see the sound they make and how this sound can be spelled.

The Sound A In English

Please remember that when I compare the French sound to an English one, it’s never exactly the same. It’s just a pointer.

The mouth and lips are open VERY wide. The chin drops. It’s a pretty long sound compared to the English A.

The French sound A is a very strong vowel sound.

The phonetic symbol for this sound is [a].

Note that pronunciation lessons sometimes talk about a second French A pronunciation [ɑ]. To me, the difference is so subtle that I can’t even hear it, so I can’t record it either… It’s a bit of a longer A sound but there’s no major sound difference.

It may be stronger in other French speaking countries, but the way I speak French, I will pronounce “pâtes” (pasta, supposedly featuring this sound [ɑ] ), “sa” and “papa” the same way.

You’ll find 2 accents for A: à and â.
Nowadays in France, as explained above, there’s not major difference in pronunciation between them.

Now let’s look at the next French vowel: E.

Major exception: the verb avoir (to have) in the passé-composé form is written “eu” and it’s pronounced like an U.

The Sound E in English

The French E sound sounds a bit like the i of ‘sir’ but much longer.

The mouth closes up.
The lips are pushed in front “like a fish” or making an 8 shape.

The phonetic symbol for this sound is [ə] .

There’s a close variation for this sound. It’s basically the same sound, but the mouth is more open… So it’s a mix between the A and the E sound. The phonetic symbol for this sound is [œ].

It’s spelled oe, or more preciselly œ (œu) but this character is difficult to type on in English keyboard. Many French people don’t use it either when they type…

The French vowel E is very popular in combinations!

And then there are French accents marks.

What’s An E With An Accent?

The use of accents will tremendously change the pronunciation of the French vowel E.

I’ll explain the pronunciation of French accents in depth soon in another lesson.

The Sound I in English

The French I is Like the ee in ‘fee’.
Watch out! I in French is never pronounced like “eye” in English.

The lips are spread to the side, like a smile. The mouth is almost closed.
The tongue is flat and touches the palate .
Your voice goes up.

The sound I can be spelled I or Y.

The phonetic symbol for this sound is  [i].

In French, Î is quite rare. It doesn’t change the pronunciation of I.

Ï will break up any combination: the I will be pronounced by itself.
Contrast : mais (the A and I combine into a È sound, final S silent – “but” in French) , but maïs (Because of the accent, the A and I are pronounced separately. For that word, the final S is pronounced – “corn” in French).

The vowel I combines with many letters to make other sounds:

So it’s quite a useful little letter!

The French vowel Y is not super common in French.
Except that Y a pronoun – see my lesson on the pronoun Y – and it’s part of a very common French expression: “il y a“, pronounced “ya” in modern spoken French!

There are a few exceptions where the Y combines with an A for a È sound, and then still keep another I sound. As if the Y was 2 i’s: it’s the case for “pays” (country)… and the words based on it) and “Abbaye“.

Practice your French pronunciation with the story and Q&A sections of my French learning method: clear explanations illustrated by a gradual, ongoing bilingual novel recorded at 2 levels of enunciation: traditional and modern French.

The Sound O in English

The French O is a bit like the o in “go” or “toe” but shorter and clipped, without moving your lips after.

Lips are pushed up and rounded and closed just like a kiss.
The throat rounds up.
The voice goes deep down.
Beware: the lips never move like an English “cow”. The lips are fixed for the French O.

The various spellings for the sound O are often overwhelming to French students… But don’t worry, you’ll soon get over it.
O, au, aux, eau, eaux all sound like O

The phonetic symbol for this sound is  [o].

Ô as in “hôpital”… No difference in pronunciation.

Just like with the E sound, there’s an open O sound.
The phonetic symbol: [ɔ].
It’s similar to the “on” in the English word “son.”
And it’s quite common in French.
Bonne (good in the feminine), homme (man), fort (strong).

The letter O combines with so many other letters to make other French sounds :

Last but not least, especially for English speakers learning French, here comes the dreaded vowel U.

As we saw before, there’s one major exception: the verb avoir (to have) in the passé-composé form is written “eu” and it’s pronounced like an “u”…

The Sound U in English

Bad news… There’s no U sound in English. Nothing come even close to it.

So, the next point is going to be quite important.

Start by making a French I sound, so like “tea” in English.
Then don’t move anything inside your mouth. But push your lips way out as a kiss, and then curl them up a bit as if you wanted to touch your nose.

Here is what you should be hearing. Ti—-iiiii-uuuuuuu

I find that it’s a huge help to start with the I sound and try to find the U as you’re saying the I.

Another way to find the U sound is to find a word you can pronounce. Many English speakers know how to say “tu” (you in French). So use this “tu” as a tuning fork.

The French U Compared to the English OO

Many methods say the French U is comparable to the English OO.
I STRONGLY disagree.

Too many things are different, in particular the fact that the English OO is not a clipped sound: your lips modulate.

The French OU sound exists. It’s yet different from the English OO sound. Listen to the 2 audio recordings : OU – OO

At least on that point, U is easy. It’s spelled U. Except from the exceptions of the verb avoir (mostly “eu” in passé-composé” but the exception carries on over other conjugations of avoir…)

Accents make no difference in the pronunciation of U. Only Û and Ü are possible, and they are really not common.

The phonetic symbol for this sound is  [y].

Some methods list another sound for U [ɥ]… as seen in the French number huit. To me this sound naturally occurs when you combine U and I… So again, I don’t hear nor pronounce a different sound there myslef!

In my opinion, it’s better to simplify… If you are a pronunciation expert, then you may need to understand all the possible nuances… but I think for most French students, we can try to make things easier and simplify these real subtle nuances, don’t you agree?

The letter U combines with many other vowels, some we’ve already seen:

Voilà ! That’s everything about the French vowels!

So, now you know the theory. You understand that some French vowels are pronounced pretty much the same way as their English counterparts. And some are really different.

Knowing how to place your mouth, tongue and lips may help.

But nothing will replace practice. You need to practice with audio so you first learn the mimic the French sounds, and then – and only then – learn to read in French… At first, all these letters may fool you into a wrong pronunciation.

The key if you want to speak French is to start with audio. Learn the sounds first. Then drill on them. I wrote my audiobook Secrets of French Pronunciation especially to explain the various French sounds to English speakers. It includes many drills.

Then you can practice what you’ve learned within the bilingual stories of my French audiobooks.