Yes in French is “oui”. 👍 What else? What about yep, yes duh, indeed, sure… Let’s learn how to nuance the French yes with examples and audio recordings.

“Oui” is probably the most common way to translate yes in French, and among the first French words you learned alongside no, hello, goodbye, thank you…

But there are many ways of saying yes in French: let’s start with the obvious “oui” and then explore the various ways to nuance yes in French.

How To Say Yes in French?

Yes in French – oui – is pronounced more or less like ‘we’ in English, and we use it a lot.

It’s neither formal or informal, it can be used in pretty much any occasion to answer in the affirmative. So, if in doubt, you can always go with “oui” to say yes in French.

Note that in English, when asking a question, it’s common to repeat part of the question:

In French, a simple “oui” suffices.

A very common way to say yes in French is “ouais“. It sounds like ‘way’ in English.

Now in spoken English, it’s common to distort the yes: yeah, yep, ya… We do exactly the same thing in French.

An enthusiastic French yes would sound like: ouiiiiiiiii ! Numbers of ‘i’ will vary depending on how you feel like typing it!

Or on the contrary, if you wanted to show a lack of enthusiasm, or show doubt even, you’d add a ‘m’ sound in front of the French yes.

Beware of Yep in French

If you are a school student of French, your teacher may not approve of you saying “ouais“.

Honestly, in France, we use it all the time. But it’s still an informal French yes. So, don’t use it in a formal environment…

Exactly the same way as you may not answer ‘yep’ to your future boss in a job interview, French has various registers.

Saying “ouais” in French is not especially vulgar or frowned upon, it’s very common, but it definitely belongs to the informal register.

And again, the tone is important. A light “ouais” said with a smile may fly, a thick “ouais” which leaves the speaker with his mouth ajar may not be as pleasant to hear (or look at).

As I said above, the pronunciation of the French yes can vary quite a bit.

Say yes in French in an enthusiastic manner, and you may emphasise on the “i” part: ‘ouiiiiiiiiiii’ – why? I guess because your lips then form a big smile!

But there is a super common way to pronounce the typical French yes, oui: it’s an aspirated ‘oui‘ which you pronounced as if you were inhaling air loudly, as demonstrated in the video from TheLocal.fr below:

So when do we pronounce ‘oui’ this way? It’s very casual and quite common, but the exact meaning is a bit foggy…

We say yes this way when we are thinking about something else… almost when the answer is automatic.

In any case, it’s really French to say ‘oui‘ this way!!

It’s common in French to repeat the yes twice: “oui, oui…” Of course this cracks up our English friends, but it’s common to double the yes to answer in a casual way in French.

It doesn’t have a specific meaning: it’s just a way to speak and it’s not like we say “oui, oui” all the time either. Just don’t be surprised if you hear it.

I have no idea why, but so many French learning methods list “mais oui” as a typical French way to say yes…

So, looks like a lot of English speaking people think “mais oui” is the way to go when you want to say yes in French.

In real life, we don’t use “mais oui” all that much… We may use it when we are upset, irritated. Like in English you would say ‘but yes, of course’ or ‘why yes, it’s obvious’…

Another French yes you’ll hear a lot is “ben oui“.

Ben is not a person here. It’s a sound we often make, like ‘hum’ in English. It means nothing. We use it all the time in spoken French.

If you’re studying French with my French audiobook learning method, you are familiar with “ben”… It’s everywhere in my spoken French dialogues.

So here again, be careful with “ben oui” and “mais oui” since it kind of implies that the question you were being asked is stupid…

Yet, we sometimes use “mais oui” or “ben oui” to show a positive surprise. It’s used this way in ads, to imply the notion that you thought it wouldn’t be possible, but here it is!

Another French yes I use a lot in my dialogues is “eh oui’. It’s the same line as ‘duh yes’ in French, maybe not as strong, more ironic, or fatalist.

When you disagree with a negative sentence, you use another French yes: si.

So, we use “si” in French when we disagree with a statement made in the negative. It’s confusing for students because it looks like the Spanish way of saying yes.

Here are other ways of using si in French.

23 Synonyms of Yes in French

There are many, many different ways to agree to something in French. Of course, you can just say “oui”. But that’s a bit…flat. 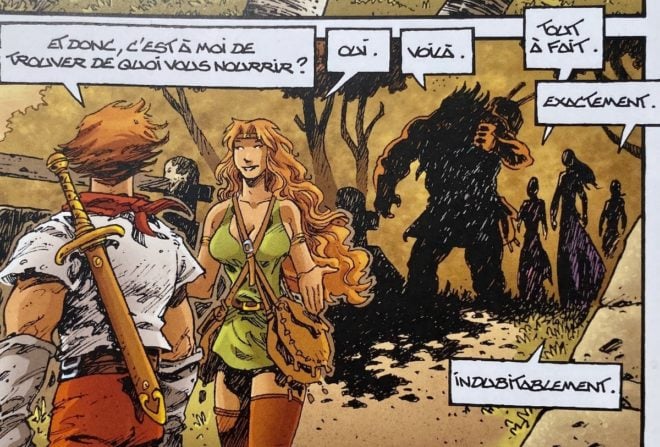 Here are some options. If you wanted to reinforce the yes, you could add “oui” in front of all these synonyms.

Please press play on the audio player to hear my recording of the list of synonyms of yes in French below.

And really, the sky is the limit… And I didn’t even speak of gestures: nodding yes, thumb up (un pouce en l’air)… we use those in French as well.

So how do you learn to nuance your French? Lists won’t really help because they won’t provide the context. Learning French in context is essential if you want to understand the subtleties. You cannot just translate something and hope to get the nuances.

I suggest you take a look at my French audiobooks – realistic bilingual stories recorded at different levels of enunciation to help you master both traditional and modern spoken French.