25 Ways to Say No in French & Audio Pronunciation

No in French is “non”. But what about nope, not at all, or no way? Let’s see the many different ways of saying no in French & practice with my audio recordings.

Saying “non” in French for “no” is undoubtedly among the first French words you learned. But there are different ways to answer in the negative in French.

If a friend kindly extends an invitation to you, are you going to just answer “no” in English? I don’t think so! You will nuance the “no”. It’s important to do so as well in French.

Please press on the audioplayer to listen to my recording of the example.

More about politely accepting or refusing an invitation in French in my article.

In modern spoken French, the pronunciation of “non” changes.

To pronounce “non” properly in French, you need to push your mouth out like a kiss. It requires an effort of enunciation.

So, if you didn’t enunciate that much and kept an open mouth, the sound will come at as a nasal “nan“. And saying “nan” for “no” in French is very common nowadays.

You’ll even see “non” written “nan” in text messages, or comic books… Anything that transcribes the way we speak. 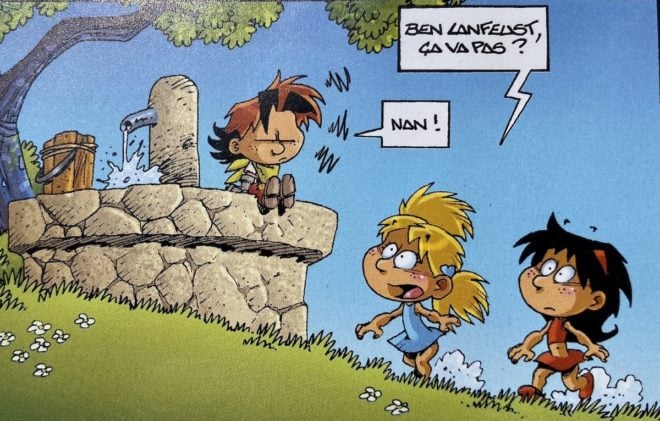 Saying “not at all” in French is very common. We say “pas du tout“, and use it a lot in French politeness for example.

Here is “pas du tout” used in context by my daughter Leyla when she was 4. She’s telling me a French mother’s day poem. Sooooo cute!!

For a categoric French “no”, we’d use the expression “pas question” or “hors de question”.

Funny this example comes to mind, as I just posted a video of my daughter (15 as I write this article) – just kidding, Leyla is super serious and a A student!

5 – You Must be Kidding in French

Another modern expression to say “no” in French is “tu plaisantes !!” as in “are you kidding me?”. Let’s call this one the ironic French “no”!

Just like I explained in my article about the many ways to say “yes” in French, French methods always list “mais non” as being a super common French expression…

“Mais non” does exist in French, but it carries a strong emotion with it. It can be surprise, shock, anger, irritation… One thing is certain we don’t say “mais non” all the time !

There is a very, very old French expression that we sometimes still use as a joke, like saying ‘nay’ in English: “que nenni”. I insist, it’s a joke! But if you managed to drop it in a conversation, your French friends would be dumbfounded!

9 – Synonyms For No in French

And there are many more ways of saying “no” in French… I can’t possibly list all the synonyms for “no” in French, but here is a start.

So how do you learn these expressions? The best is to learn them in the context of a story, so you understand the meaning but also the intent behind it. I suggest you check out my French audiobook learning method: clear grammatical explanations illustrated with an ongoing novel recorded at different levels of enunciation (traditional French and modern spoken French)

Can you think of more ways of saying “no” in French? Please add them to the comment below – with an example if possible.