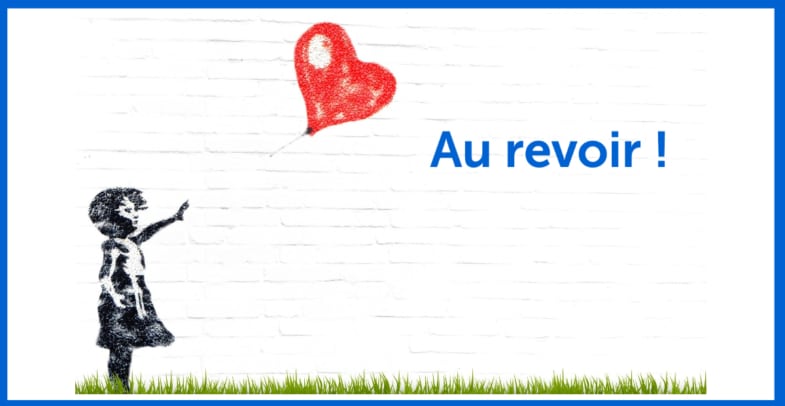 So let’s see how to nuance “goodbye in French. but first let’s talk about the modern pronunciation of “au revoir”.

Literally, “Au revoir” means “until we see each other again”. Saying “Au revoir” is extremely common, and you can use it in any occasion.

In spoken modern French we pronounce “au revoir” more like [orvoir] in one sound, gliding over the “e”.

Just like with “hello in French“, it’s more polite if you use “Monsieur, Madame or Mademoiselle” with “au revoir”.

But, as we’re going to say, there are many other ways to say bye in French. Sometimes, when a French person uses another word than what you were expecting, this may cause you to freeze.

As I always say, it’s super important to stay connected with the context: there will always be words or expressions you don’t know! However, when you don’t know a word, chances are that you can guess it: deduct what the person is saying from the context.

You may choose to use only one way to say bye in French yourself. So you don’t hesitate when YOU need to say goodbye. And that’s perfectly fine.

But it’s important you know the different ways of saying goodbye in French.

Another way of saying goodbye in French is to say:

Watch out: “Bonne nuit” is what you say just before someone goes to bed, so much more like “Sleep well” in English. More about saying goodnight in French.

It’s quite common to use both “Au revoir” and “bonne soirée, bonne journée, or bonne nuit” to say goodbye and then add have a good day / evening / sleep well…

I usually use them together : “Au revoir ! Bonne soirée !”
But you can also use “Bonne soirée, Bonne journée” alone.

What about saying “Bonne après-midi” in French as in “Have a good afternoon”? Well, it’s not impossible, but it’s not common at all.

“Salut” is a very casual way of saying goodbye in French. We also use it to say hello in French, so it’s practical!

Saying “À plus tard” is a very popular way of saying “Goodbye” in French nowadays. When you say “À plus tard”, the s of “plus” is silent, so it’s pronounced like [plu].

However, there is a shorter version that’s even more popular: just saying “À plus“. In this case, the s of “plus” is pronounced so it sounds like [a plussss].

In a French text message, it’s common to say goodbye this way: A+.

Note that when you use “À plus (tard)” to say goodbye in French, when you are going to see the person again is not clear. It could be later the same day, it could be farther in time.

Saying “À tout à l’heure” is very common as well. This time, this means you are going to see the person later in the day, like ‘see you in a bit’ in English. Note the spelling: no e at “toute” since it is an invariable indefinite pronoun. However, you will hear the “t” because of the liaison of “tout” with the à.

It’s a mistake lots of French people would make in writing.

Now, just to confuse everybody, in modern spoken French, we often just say “À toute” – and in this case, custom has it to write “toute” with an e because it’s pronounced pronounced [a toot]

More about the use and pronunciation of “tout” in my article.

“À Tout de suite” means “See you in a minute” – so to be used only when you’ll see the other person again right away.

“À la prochaine” means same thing as “À bientôt” but is more trendy. We use it a lot nowadays.

Pretty much saying “À” + a notion of time will mean ‘see you then’ in French. So you’ll commonly hear – please press the audio player to hear my audio recording of these words.

“Adieu” is almost last in my list because it’s also no longer used in French. It literally means “See you (when we’ll be with) God”. So that means you don’t expect to see that person again anytime soon. It means goodbye for ever.

Nowadays, people use it sarcastically, when they don’t expect to see someone for a long time (maybe as they over-exaggerate the time it’s going to take to do what they are about to do)
Je vais parler à mon banquier… Adieu!
I’m going to talk to my banker… Goodbye forever! (May God be with me = I expect this appointment to be painful and take forever!)

You’ll find it used in French literature (for example Adieu is a famous Short story from Balzac), and you may hear it used in very sad movie moments when people leave each other forever, but except from that, we really don’t use it in France anymore to say goodbye.

Well… I’m going to list this here in case you hear it in a movie, but honestly, I’ve never heard “à la revoyure” said myself.

Anyway, as I said it’s no longer used, unless you are joking.

So yes, saying “au plaisir” is a common way to say goodbye in French.

The full expression is “au plaisir de te/vous revoir” – to the pleasure of seeing you again, so a bit like until we meet again.

BUT, saying “au plaisir” would be extremely frown upon in upper social classes. I don’t mean to sound like a snob, and whenever I write judgements like these some people comment that I’m wrong, that they use it all the time and so does their family…

Ok, what can I say?
Take it or leave it, but if I was a French student, I’d stay away from saying “au plaisir”.

As made famous by the French illustrator of the Comic book “Titeuf”, saying “Tch’ô” is common among the younger French crowd. It comes from the Italian “tchao”. Stay away from it unless you’re under 20.

Yet, it has always been hip in French to say goodbye in a foreign language. Many French people would use “bye” or “bye-bye” to say goodbye.

Saying “bye” is actually VERY common in France. I guess it’s the same everywhere, don’t you think? Don’t you drop an “au revoir” from time to time with your English speaking friends to sound funny, fashionable, a bit witty maybe?

So know you know how to say “Goodbye” in French! But what about the gestures that accompany saying “Goodbye”?

Well, in France, get ready to get kissed goodbye. Among friends and acquaintances, it’s very common. Read my article about the French kiss.

French people also shake hands. Or they can simply wave goodbye, or kiss and then turn one last time to wave goodbye. 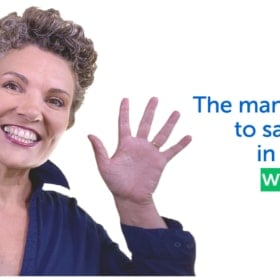 7 Ways of Saying Hello in French