Typing accents in French is problematic for people who are typing on an English keyboard.

First will study the list of French accents and special characters, then I’ll tell you how you can type them on different devices and computers even if you are not using a keyboard with accents built-in.

Wait a second… you were looking for tips on how improve your French accent. Wrong page! Follow the link to my 9 proven tips!

Bookmark this page and copy/paste these French accents and special characters for when you type in French… I’ve added a few other French symbols I thought you may find useful….

Would you like to know how to pronounce é and è and all the French vowels? I invite you to read my free French vowel lesson with audio.

Also, although this is not an accent per se, I’m sure you’ve wondered about this French symbol: the c with a cedilla.

Need more help with your French pronunciation? Check out my Secrets of French Pronunciation Masterclass. Learn French offline, at home or on the go on any device!

Now that you now how to call the French accent marks and how to pronounce them, let’s see how you can type French accents on an English QWERTY keyboard.

But first let me address a simple, yet essential question.

Whether the French accent changes the French pronunciation of the letter or is just a written symbol, if a word is spelled with an accent in French, well, you need to type it that way…

Accents are still very much used in written French nowadays, and absolutely necessary when you are writing a letter in French, or even a formal email.

This being said more and more often French people are dropping accents when they are typing fast, or texting in French.

Because I lived 17 years in the US, I’m used to typing on an English QWERTY keyboard. When I email my friends in French, I often don’t use accents – even though I do know the shortcuts… I’m just lazy that way!

Would a French person be able to read a message written without accents? Yes they will.
So, don’t worry too much about typing accents when you’re emailing your French friends!

However, if you are typing a formal French letter, or typing something for your French class, you’ll need to type the accents in French. Which leads us to our next point.

How Do You Type French Accents?

English keyboards present their letters in an QWERTY layout. French keyboards generally use the AZERTY layout, which has some major differences from our familiar QWERTY – including some special keys for typing accents.

So, on a French AZERTY keyboard, it’s really fast to type accents – and the French are accustomed to using the right accent keys.

Thank goodness, it’s getting easier and easier to type French accents on English keyboards as well.

Here is how you can type accents on different devices:

How To Type French Accents On iPhone & Android

Typing a French accent on a mobile phone is quite easy.

Press and hold the letter you would like to add the accent to for a second or two and a list of accented letters will pop up. You can then easily choose the appropriate French accent.

For example, to type a é press on e and hold, the accent menu appears, make your selection by sliding your finger to the desired accent and releasing your finger. 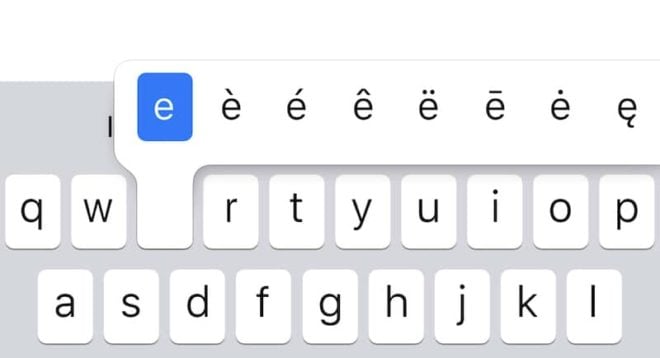 This shortcut is supported on all iOS and most Android OS versions.

How To Type French Accents On A PC – Mac & Windows

Most modern Mac & PCs also work like the mobile keyboard: just click and hold the character you’d like to add an accent to and in an instant, a pop up will appear allowing you to either click on the desired accented character with your mouse, or type in the number key located under the accent in the pop up.

There are shortcuts to type accents on a PC. These should work on all Mac computers and most Windows computers:

So you’ll need to press 3 keys to type a letter with a French accent. 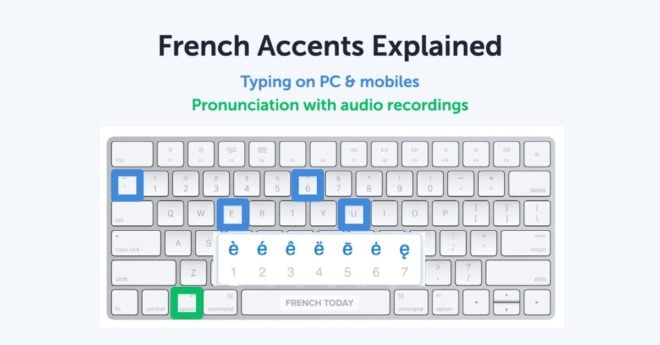 If for some reason nothing above works, just copy/paste my French accents cheat sheet below!

I hope this helped! If you know another method, please describe it clearly in the comments below and I’ll add it to this article.

Still can’t manage to type your French accents? Check out this article on wikiHow.

Now I’m going to digress a bit… but it may be useful for you to know how to spell a French accent in a word you are spelling out-loud.

How Do You Spell Out An Accent In French?

There are several ways of spelling words with accents in French.

In formal school-like spelling, you will just name the letter and the full name and sometimes even position of the accent.

In informal spelling, as in spelling a French word to a friend, you could be more creative… You could say “e accent” or “e accent aigu” or even just say é : the later being much more common among French people than saying “e accent aigu”.

On the subject of spelling, you may be interested in my free lesson on French punctuation.