French adjectives are somewhat difficult for English speakers because the way we use them in French differs a lot from English.

To master French adjectives, it’s essential you train with audio recordings to master the pronunciation. I hear so many mistakes – students usually know how to write adjectives, but way too often have never developed the necessary reflexes in pronouncing them correctly.

To understand this article, I suggest you first get familiar with the grammatical notions of number and gender in French.

Let’s start with the beginning: I’ll first explain what an adjective is in English.

What is an Adjective?

An adjective describes a noun or a pronoun in different ways:

If you just dive into advanced adjective lessons which list all the exceptions, you risk being overwhelmed. And it would be too bad, because there are thousands of adjectives that follow the relatively simple rules below. In my audiobook Mastering French Adjectives, I’ve listed hundreds or commonly used regular French adjectives, and recorded their pronunciation in the masculine and feminine form. Adjectives are also explained thoroughly in my French method for beginner students.

What is Different Between French and English adjectives?

French adjectives have 2 very different behaviours from English ones:

1 – French adjectives usually come after the noun:
Une valise bleue.
In English, most adjectives come before the noun:
A blue suitcase. (More about French color adjectives)

2 – French adjectives change to match the gender (masculine/feminine) and number (singular/plural) of the word they modify :
Une fille blonde, des garçons blonds. (Note the e and the s at the end of “blond”)
In English, adjectives don’t change :
A blond girl, blond boys. (“blond” doesn’t change in English)

Please click here for my explanation of the grammatical concepts gender and number.

What to do With French Adjectives?

This means that in French, each time you use an adjective, you must first analyze the word that it modifies:

Then, you will have to make the adjective match (in grammar we also use the word “agree”) with the noun (or pronoun) it modifies.

And finally, you will have to remember to place your adjective AFTER the noun (for most cases, though there are some exceptions).

This too will take some training and getting use to :-)

This looks simple enough, and students tend to overlook it because they think “yeah, I get it”.

However, it’s not because you “get it” that you will be able to apply these rules naturally.

Mastering these “simple” rules (French adjective position, feminine, masculine, plural agreement and pronunciation) take training, a lot of repetition. And because the adjective pronunciation is likely to change between masculine and feminine, I strongly advise you train on your adjectives with an audio French learning method.

How do I make a French Adjective agree with a Feminine word?

The basic rules to make an adjective feminine are the following :

A – French Adjective Ending in a Consonant (S,T,D)

A LOT of French masculine adjectives end in a consonant, in particular S, T and D. When the French adjective ends in s, t or d, we usually add a silent “e” to make it agree with a feminine word.

Important pronunciation note: the consonant (which is going to be silent in the masculine form) will then be pronounced because of the “e” (the “e” itself is silent).

Il est blond – the final “d” is not pronounced, it’s silent.
Elle est blonde – the “de” is now pronounced. So the adjective ends on a “d” sound.

When the adjective ends in an “s”, the feminine “se” will become a “z” sound.

B – French Adjective Ending in a E

A LOT of French adjective end in a “e” in the masculine form. If your masculine adjective ends in a “e”, there will be no change in spelling nor pronunciation.

Watch out! If the masculine adjective ends in a “é” (“e” with an acute accent), you will add an “e” for the feminine, but the pronunciation will remain the same.

How to Make a French Adjective Agree with a plural word?

The basic rule is easy. You add a silent “s” to the singular adjective.

Since this “s” is silent, there will be no difference in pronunciation between a singular and a plural adjective, the only difference will be in writing.

Now, it’s really important you realise the difference between WRITTEN and SPOKEN French

“Garé” is pronounced the same way whether it is spelled “garé, garée, garés, garées”. When you are speaking French, you shouldn’t even think about doing this agreement… The way it is spelled doesn’t matter when you speak… This is true for French verbs as well. 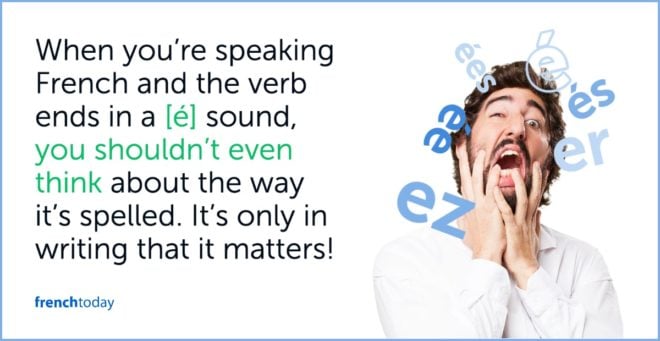 On the contrary, you need to train with audio to get the correct pronunciation of the adjective that end in a consonant… This is a reflex you will acquire with repetition, and something important to get right in French.

French Adjective Endings in Other Letters and Exceptions

There are many exceptions when it comes to French adjectives.

However, French learning methods usually insist almost only on the exceptions, and will make you drill and drill over them. OK… but what about all the regular adjectives?

There are thousands of regular adjectives which follow the rules above. In my audio lesson “Mastering French Adjectives“, I start by giving you long lists of common regular adjectives, and record them in the masculine and feminine forms. When you are really familiar with the regular behaviour of French adjectives, we tackle the exceptions.

In my opinion, the priority for beginners learning French adjectives is to train with audio and really get the basic rules, the placement and the pronunciation difference between masculine and feminine.

Start by training with regular adjectives. Get accustomed to placing them after the noun, and create reflexes when it comes to the difference between the masculine and feminine form – if any.

The exceptions can wait…