What do French Gender and Number Mean ?

Understanding grammatical terms such as “gender” and “number” is not that obvious, and is often the reason why French language students don’t get French grammar.

Language methods use grammatical terms as if they were obvious. However, my experience is that many students don’t really understand these words. So in some cases it’s not so much the French grammar itself they don’t understand, but the French vocabulary their book uses to explain it.

I’m very aware of that problem, this is why I always explain everything very clearly in my progressive French audiobook learning method À Moi Paris.

So, today I’ll explain the grammatical terms of “gender” and “number” in English and in French.

In English, gender is linked to the sex of a living being.

In French, all nouns – whether they refer to living beings or not – are either masculine or feminine. There is no “neutral” in French.

If it’s a living being, the gender will be determined by the sex: feminine or masculine. A female dog will be feminine. A male dog masculine. Again, no neutral in French, so all living being as well as… well everything… is either masculine or feminine.

So in French, all nouns have an “assigned” gender that needs to be memorised with the noun when you memorize it.

Some words ending tend to show the French word is masculine, and there are also some feminine word endings, but most of the time you can’t guess and just have to memorize the gender of the noun by heart.

When you learn a new noun, you should always learn its gender at the same time since it will affect the spelling and pronunciation of the words related to it, such as French adjectives.

In books or French vocabulary lists, the gender of a noun is usually indicated with an (m) for masculine, (f) for feminine, or shown by the French article (le, la, un, une) that accompanies it.

Never learn from a list of French words which doesn’t include gender information, you’d be missing half of the information! (Be warned, the internet is unfortunately full of such lists…)

Make sure you also indicate the gender of nouns when you make your own French flashcards.

3 – Why is a Noun Feminine or Masculine in French?

I don’t know. Nobody knows.

Why can you find a synonym of “le bonheur” in French but now it’s feminine: joy, la joie is feminine in French.

Hum…. I don’t make the rules, so I’ll leave this debate to the philosophers…

“Why” is not a good question to ask there. It is what it is. And you need to memorize the gender of each noun in French. There is simply no way around it.

Note that there are emerging French “neutral” pronouns being used mostly within the LGBTQ+ community, such as “iel”.

4- What Does Number Mean in Grammar?

Number is the grammatical term used to talk about singular or plural, which means:

In English, adding a pronounced “s” at the end makes a noun plural: books, tables… This S is pronounced in English, so you can easily tell if you are talking about something singular “book” or plural “bookS”. You see it in writing, but you also hear it when you speak.

Some English nouns have an irregular plural: “children”.

In French, the plural of a noun is created by adding a silent “s” at the end, sometimes it’s a silent “x” and there are also irregular plurals. So, since the S of the plural is silent, how can you tell if something is singular or plural when you speak French?

To know whether the noun is singular or plural, you will have to listen to the words related to the noun, since the noun itself is likely to be pronounced the same way in the singular and in the plural.
For example: une table, des tables – a table, some tables.

In French, the word “table(s)” is pronounced the same way whether it is singular (une table) or plural (des tables), so whether it ends with an S or not. In both cases, it’s pronounced “tabl”.

Look For The Related Words That Complete the Noun

French common nouns will have a little word accompanying them.

This little word is important because it shows the number and gender of the noun. Like a pilot in a plane, these little words work together with French nouns to complete them. They are called definite, indefinite or partitive articles, or possessive, demonstrative, interrogative adjectives…

For example: ma table – my table, cette table – this table, quelle table ? which table? Etc… Not only do these words carry the notion of “my”, “this” and “which”, they also carry the number and gender in French.

They are a bit of a pain because they change according to the number and gender of the noun, but sometimes also according to other factors, like French possessive adjectives.

But mostly, they are a pain because where in English you have one word, in French, we have three, or more…

For example, if you take the definite article “the” in English (easy enough), well, in French it’s not that easy… We have four different words meaning “the” !!

So, in total, there are four “the” in French. There could be six… consider yourself lucky!

Yet, typical teaching methods fly over this as if it was absolutely obvious. And this is how I meet intermediate level students who still make mistakes with their articles….

Even if you understand the logic, it doesn’t mean you are able to apply it easily. We are not robots! You need to practice to really make these concepts yours. This is so different from English! No wonder students need a little time to let it sink in!

Make sure you study French with a progressive French learning method, which really explains things clearly and gradually, giving you plenty of practice before you move on to the next point.

Sometimes, only the context will tell you if something is plural or singular, since the pronunciation of everything will be the same in the singular and the plural.

It’s the case for many French verbs since the French pronouns “il, elle” singular (he, it, she) and “ils, elles” plural (they) are pronounced the same way!  It can be very confusing!

For examples, the French pronunciation of “he is speaking” and “they are speaking” is the same in French: il parle = ils parlent = “eel parl”

Only the context will tell you if the “il(s)” is singular or plural in French.

Most students learn with a written method. So, since it’s written differently, it’s obvious enough. But they don’t realize “il” and “ils”, “parle” and “parlent” are pronounced the same way! And then they can’t understand the French when they speak.

Chances are that the students will also mispronounce the French words to try to make a difference between the singular and the plural. Hence the importance to always study French with audio, even for grammar!

5 – What’s the Gender and Number of that French Word

So now that you understand the grammatical terms gender and number, you’ll be able to answer a typical French language class question: “what is the number and gender of that French word?”

For example, if I say “une table” – the gender is feminine, and the number is singular.

Both are show by the French article “une”in this example, however your French teacher may have withhold this information during the test if you had to memorize a list of French words! Gender and Number are part of the info and you need to learn this at the same time as you learn your French word. 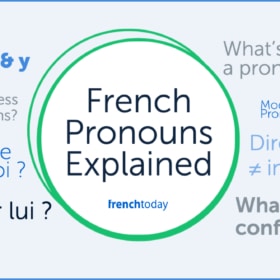