In order to learn French efficiently, you need to understand the French grammar terms used by books and French teachers.

This is particularly true for French verbs, since understanding the logic of French verbs is complicated enough for students. If you can’t understand the explanations, then you are in real trouble. Often though, it’s not the French verb logic which is difficult, but the French vocabulary used to explain it which you simply don’t understand.

What follows is a quick overview and recap of what these different French grammar terms mean: all these concepts are clearly and progressively explained in my audiobook French learning method À Moi Paris.

1 – What is an Agreement in French Grammar?

In French, some words are said to “agree” with each other.

The same way as in English you will add an “s” to the 3rd person singular (she singS).

In French, you will have to change some words or parts of words (like the endings of verbs or French adjectives) to match other French words related them.

A verb indicates an action.

A verb is “conjugated” to match (we also say to agree with) its subject: he does, she has, the dogs were…

A noun is the name of a person, an animal, a thing, a place, an idea…

Or they can be proper nouns: Mary, Paris, France…

A pronoun replaces one or several nouns.

When you speak of John, instead of repeating his name over and over, you use the pronoun “he”.

“Him”, “his” are other kinds of pronouns, although they also refer to Paul.

You will choose the correct pronoun according to the grammatical value of the noun you wish to replace. For example: “he” is used to replace a noun subject of the verb, “him” for an object pronoun and “his” for a possessive pronoun.

French pronouns tend to be complicated for English students, because students often don’t really “understand” pronouns in English. I’ve written a free blog lesson about French pronouns which I invite you to read for more info.

French pronouns are explained in depth and progressively, with many examples in my French audiobook learning method À Moi Paris level 3.

The subject is the person or thing that does the action of the verb.

There is an easy way to find the subject of a sentence.

A subject is a noun or a pronoun. It can be a person, a thing, a place, an idea…

In grammar, a person refers to the different pronouns used to conjugate a verb. I, you, he, she, it, we, they.

They are divided between singular and plural (for this concept, read my French blog article on gender and number).

7 – What is a Verb Conjugation?

The conjugation is the way a subject changes a verb so they match.

In English, the conjugation of verbs is quite simple. The verbs don’t change much (I, you, we, they speak – he, she, it speaks) except for the verb to be (I am, you are, he is).

It is not so in French, where the verb form changes with almost each different person.

The way French verbs are written and their pronunciations are also very different, this is why it’s important to study your French verb conjugations with audio.

In French, some words are said to “agree” with each other.

The same way as in English you will add an “s” to the 3rd person singular (she singS); in French, you will have to change some words or parts of words (like the endings of verbs) to match other words related them.

9 – What is a Regular Verb and an Irregular French Verb?

Some French verbs are called “regular” because they follow a predictable conjugation pattern (such as adding an “s” to the 3rd person singular in English).

Some French verbs are called “irregular” because their conjugation pattern is not predictable (like the verb “to be” in English).

10 – What is an Auxiliary Verb in French?

An auxiliary verb is a verb used to conjugate another verb. For example: I have washed the dishes.

Used this way, the auxiliary verb (have) loses its own meaning (to have = possession), it’s just a way to change the time frame of the action of the main verb (in my example “to wash”).

The various past and future tenses of the Indicative mood are explained in depth in my French audiobook learning method – Upper Intermediate level.

The infinitive is the form of the verb before it is being conjugated. It’s the basic verb name: “to speak”.

In English, the infinitive is usually preceded by “to”: “to study”, but not always (example: “can”.)

In French, there is no “to” before the verb. The infinitive form is shown by the last two or three letters, usually “er”, “ir” or “re” that will also determine the conjugation pattern of the verb if the verb is regular.

A tense indicates when the action of the verb is taking place: now, in the past or in the future.

You need to memorize that in French grammar, the adjective “simple” doesn’t mean “easy” but means “NOT compound” – using only one verb, not an auxiliary + a verb.

The mood indicates the position of the subject towards the verb.

The mood will affect the conjugation of the verb.

Note that there are also impersonal moods in French, which are invariable, meaning they always use the same form, the verb doesn’t change according to who is speaking.

The voice (la voix in French) indicates the relationship between the subject and the verb.

There are three voices in French:

15 – What are Affirmative and Negative Sentences?

However there are other negative words such as rien, jamais, personne…

16 – What are Declarative and Interrogative Sentences? 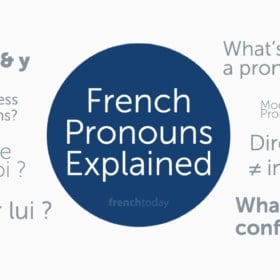