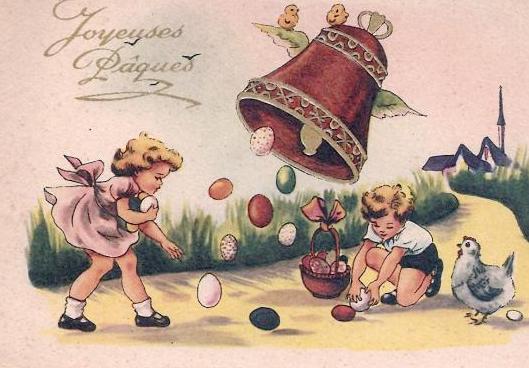 How do we celebrate Easter in France? Learn the French traditions for “Pâques” (Easter in French), such as our Magic Bells & Easter meal…

“Pâques” (Easter in French) is an important holiday in France: a religious one of course, but also a traditional gathering for families, religious or not. For Easter, France enjoys a three day weekend, as Easter Monday is a national holiday in France.

During the traditional Easter family reunion, kids go egg hunting (you can see our daughter Leyla in action in the picture below), but our egg providers are a bit different: magic bells!!

The French traditionally cook a large Easter meal with a leg of lamb, and set a lively table to honor the coming of spring time.

What Does “Pâques” Mean?

The French word “Pâques” derives from the Latin “pascha”, meaning “Passover”, which comes from the Hebrew “Pesah” meaning “passing way” (hence the word “passage”) and is the Jewish name for the Passover celebration, which remembers the Exodus out of Egypt.

According to the Gospel, it was during this Jewish celebration that Jesus rose again.

Check my article about the French Vocabulary for Easter.

Le, La, Les Pâque(s) ? What Gender and Number is Easter in French?

In French, there is a distinction between “la Pâque juive” (a feminine singular word- the Passover celebrated by the Jews) and “les fêtes chrétiennes de Pâques” (Christian celebration of Easter), more simply referred to as “Pâques” (plural, no article).

While the Jewish Passover commemorates the Exodus from Egypt, the Christian Easter celebrates the resurrection of Jesus (the picture is by Hendrick van den Broeck, in the Sistine Chapel.)

For those of you interested, listen to my slow recordings of the Catholic mass in French

Watch out for “Easter” in French!
Pâques = Easter (no le, no la, no les = never used with an article)
La Pâque = Passover
Click to Tweet

Easy enough you’ll tell me. But it’s French, it’s never easy… If we don’t use any article to refer to Easter, we may use adjectives…

The word for Easter is Pâques, masculine singular (even though its written with an S).

When you talk about events around Easter, so use Easter more like a time than the religious celebration, it’s feminine plural… Go figure!

In France, we call spring break, the spring vacation “les vacances de Pâques”. We also call them “vacances de printemps” and they differ according to 3 geographic Zones through France (the French system that staggers school holiday dates per region so that not all French people are on the roads at the same time).

The “vacances de printemps” are 2 weeks long and fall sometimes between April and May.

In France, we have a very special magical being for Easter : Magical holy bells (with little wings…)

For Easter in France, it’s not a bunny giving out eggs, but magical and holy flying bells: “les Cloches de Pâques” 🔔🐰🐣Click to Tweet

The Catholic tradition dictates that Church bells don’t ring between Good Friday “Vendredi Saint” and Easter Sunday, to commemorate the death of Christ and his resurrection.

The oral tradition then said that the bells were flying to Rome during that time (they then grow 2 little wings and dress up with a lovely ribbon) to be blessed by the Pope, and then come back from this trip loaded with presents.

They randomly drop these treats for the great joy of children.

On the other hand, the rabbit is a more Germanic tradition: “Astra” for Saxons and “Ost Ara” for Germans were goddesses of the spring whose symbol were bunnies and hares.

The Easter bunny being so common among our neighbours, and sometimes even adopted by culturally Germanic region like Alsace, it’s quite usual to see rabbit shape treats around Easter. 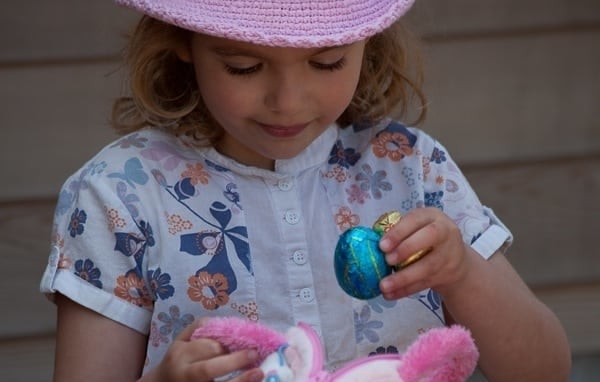 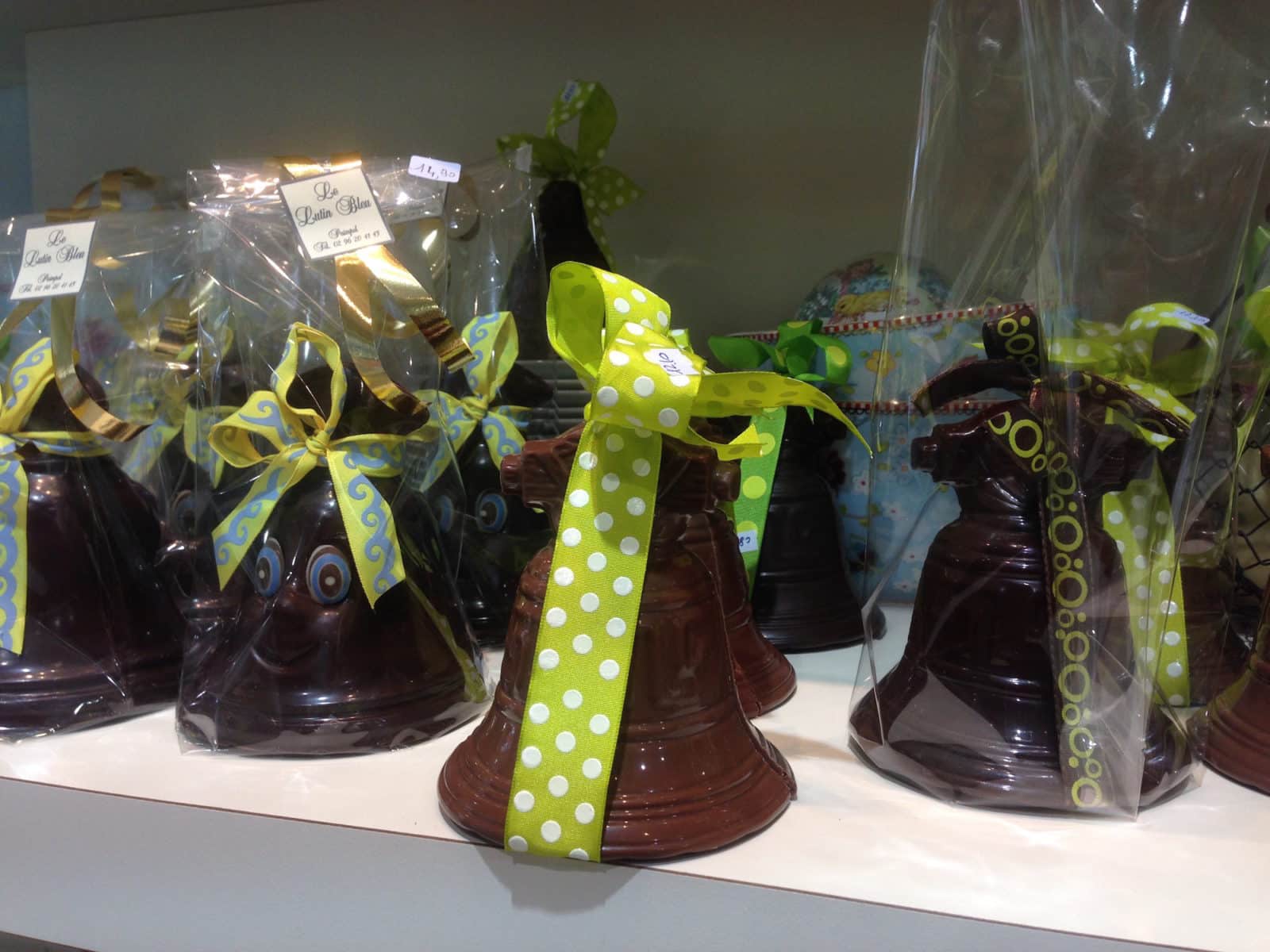 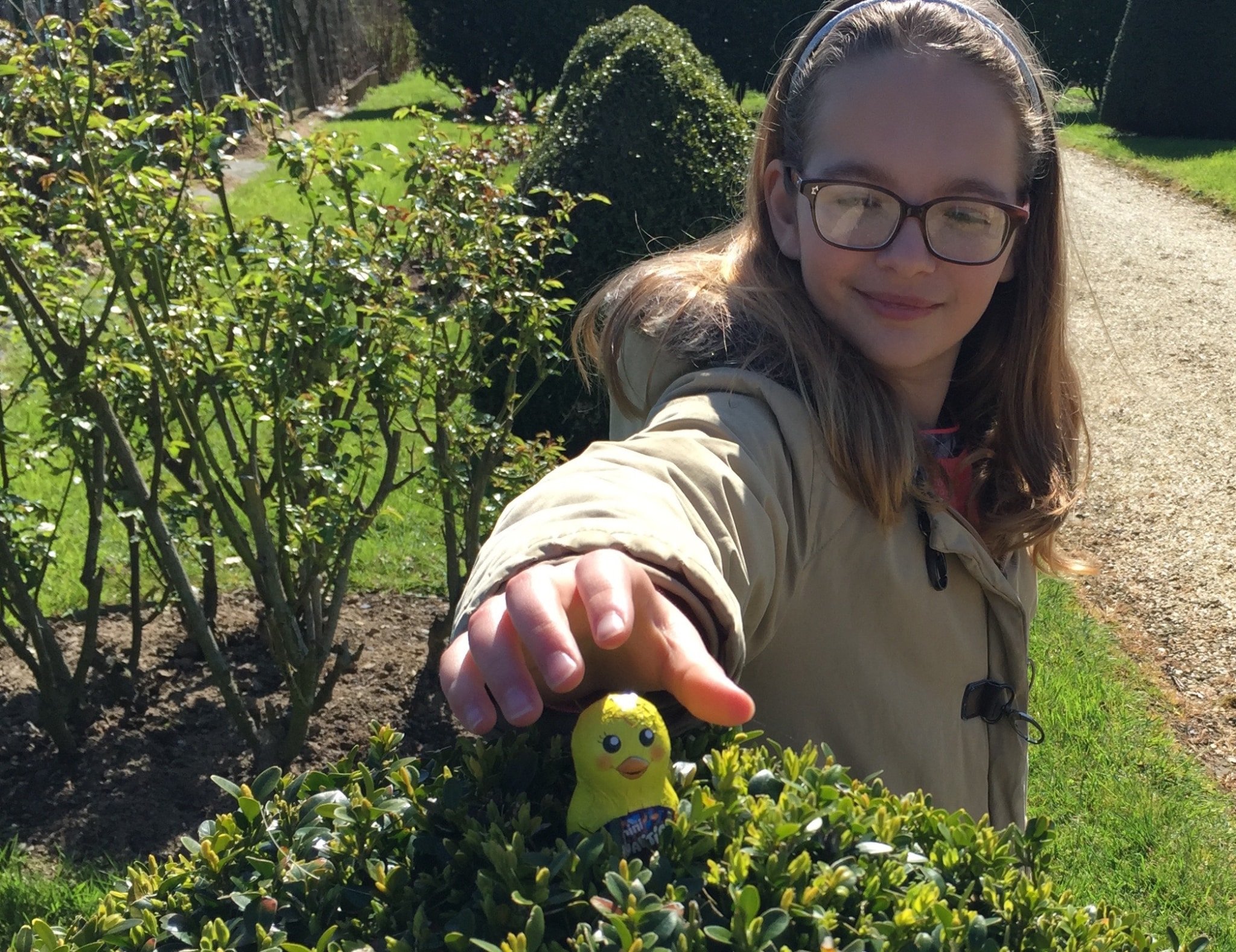 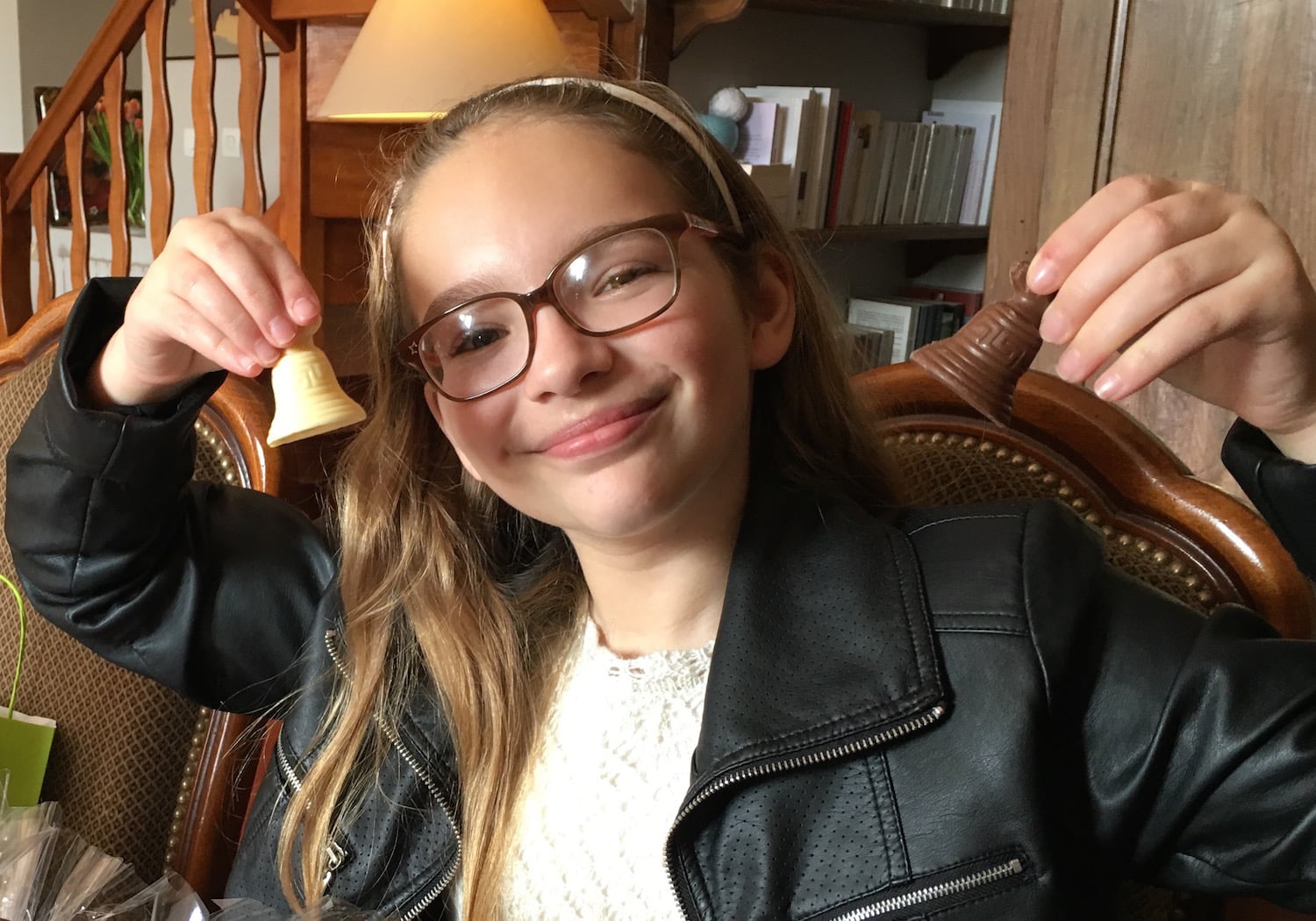 Traditionally, the bells fly back on Saturday night. So, Sunday morning is the opening of “la chasse aux oeufs” in France!!!

Someone usually shouts “les cloches sont passées” and all the children run outside (or inside) to collect chocolate or sugar eggs, hens, roosters, chicks, bunnies and lambs… and flying bells of course, all symbolic of Easter, spring and renewal.

In the old days, the eggs were real eggs, boiled and then decorated by children, colored in red with onion juice, pink with radish, green with ivy… (I am laughing imagining Leyla’s face if we placed boiled eggs in the garden instead of chocolate ones….)

We hide the treats more or less well depending on the age of the children. Some easter egg hunts are organized by cities and other communities (you can usually find details on the web).

My Traditions of Easter in France – Understand French Video

I shot a short video to explain the pronunciation of “Pâques” in French and the various traditions of Easter in France.

Why Eggs for Easter ?

There are several theories…

A story says Mary Magdalene was bringing cooked eggs to share with the other women at the tomb of Jesus, and the eggs in her basket miraculously turned brilliant red when she saw the risen Christ.

Early Christians of Mesopotamia stained eggs red in memory of the blood of Christ shed at his crucifixion.

The Christian Church adopted the custom, the eggs became of symbol of the resurrection.

Some say the egg represents the boulder of the tomb of Jesus.

The most practical explanation is that the Catholic Church forbade the consumption of eggs during Lent (le Carême), but during that time, hens still laid them… So there was a surplus of eggs at Easter, and you had to use them fast… This is also the reason why we cook crêpes at Mardi Gras, before Lent starts.

“Pascal(e)” both the noun and the adjective come for “Pâques”.

For Christians, Easter symbolizes Jesus’ passage from death to life, his sacrifice. Thus, Jesus is identified with the sacrificial lamb of the Jewish tradition. Jesus is also represented by a lamb in the Apocalypse.

The lamb also symbolizes new life, as it happens in Spring time.

The table is usually very lively, with pots of daisies and other spring flowers, green and yellow colors prevail. Many people use Easter eggs to also decorate the table. 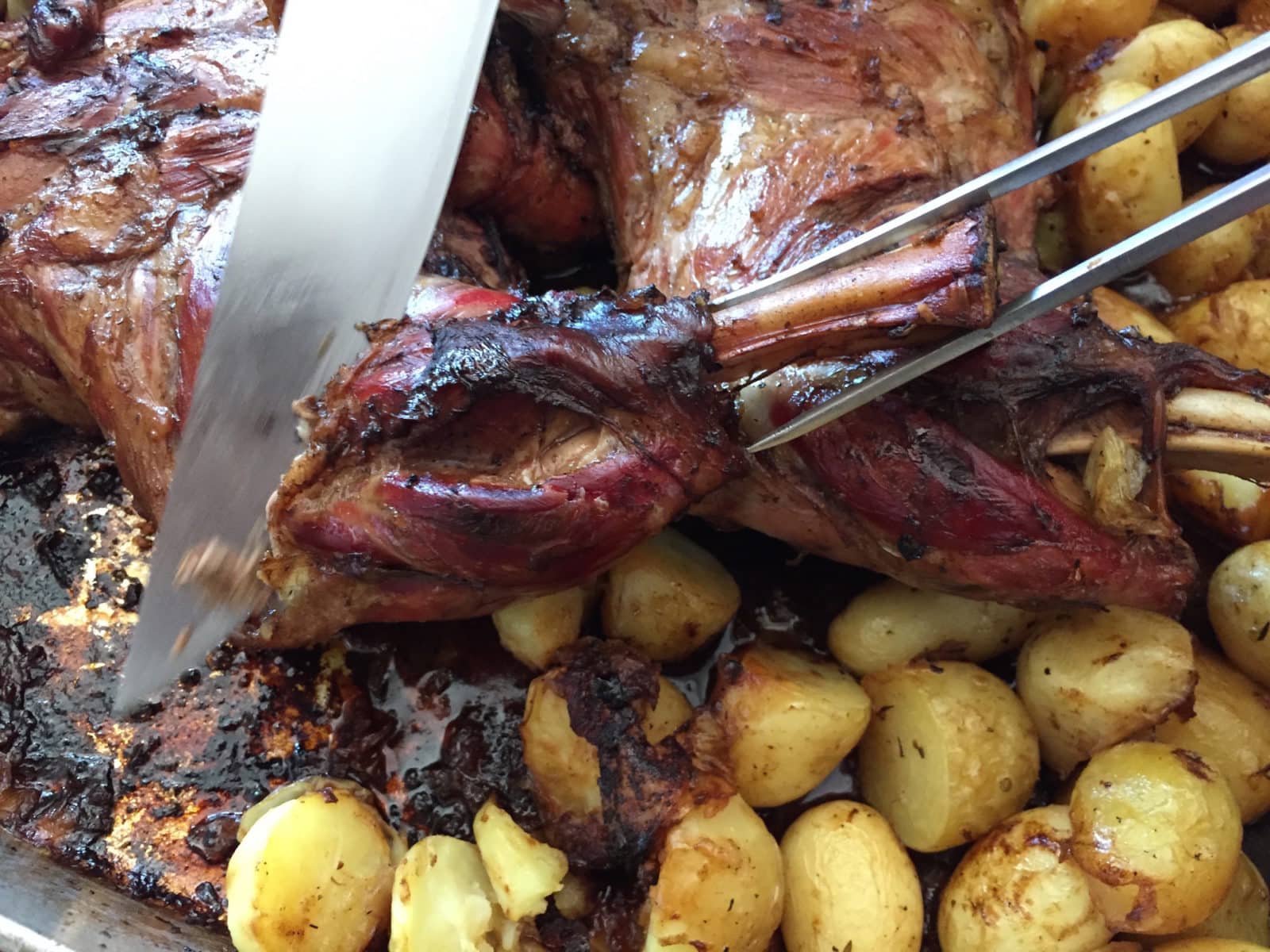 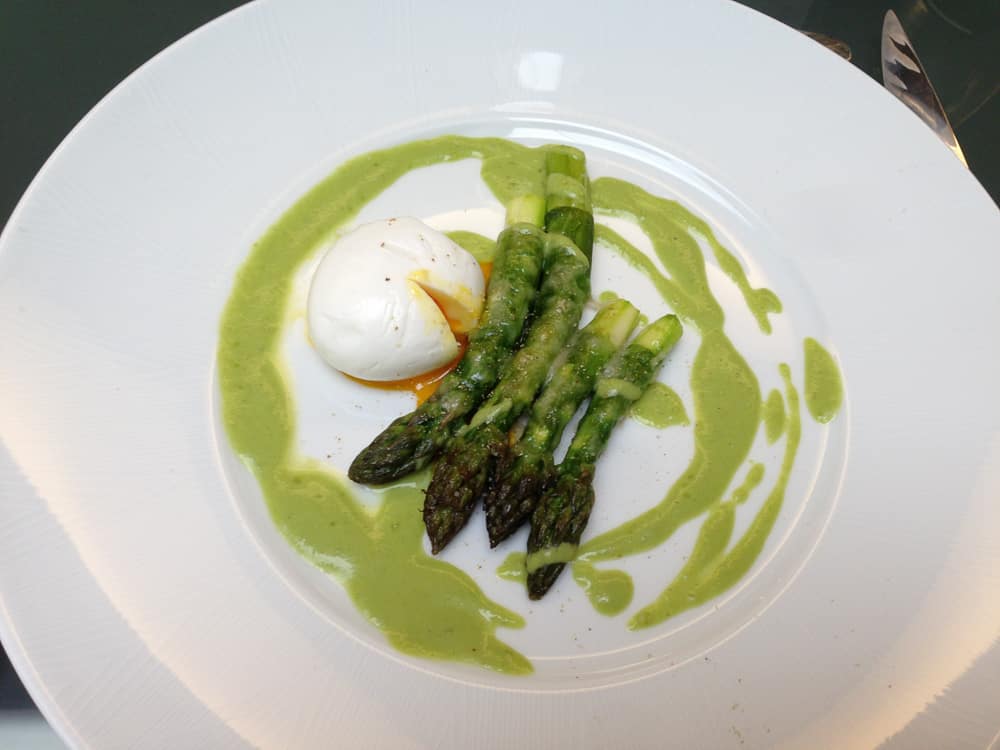 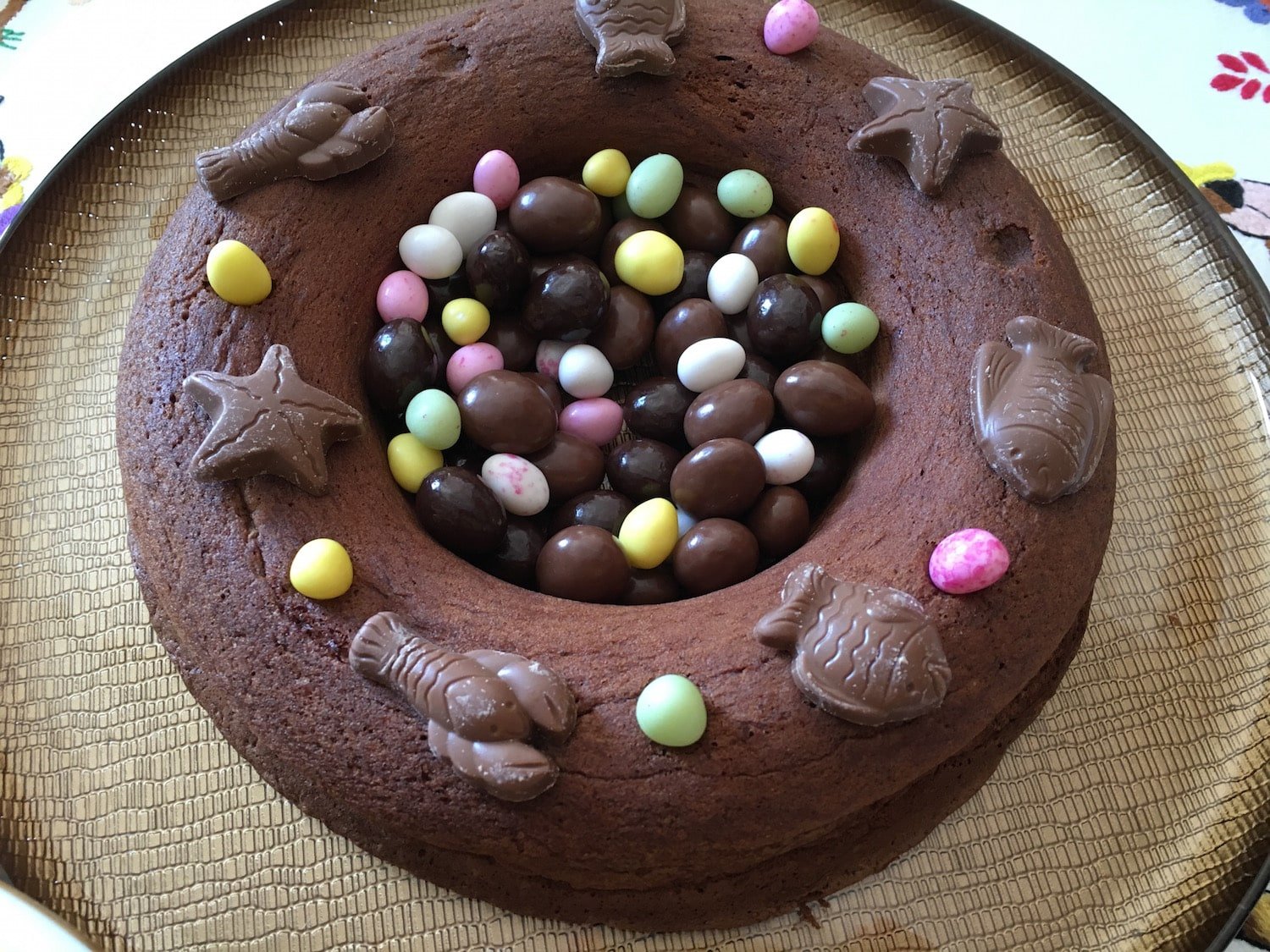 For starters, you can serve cold asparagus with a vinaigrette enriched with boiled eggs and grated fresh chives. It is a delight! or you can try this Roasted Green Asparagus and Egg recipe which is sure to impress!

Then, of course, comes the lamb, traditionally a roasted leg: see Olivier’s own French lamb recipe here. It will go wonderfully with green beans, or a mixture of all fresh vegetables from the garden. If the spring is late to come this year, a traditional dry bean to serve with lamb is flageolet beans.

There is not a traditional Easter dessert… people usually dig into the chocolate treats, but it’s customary to also serve the first strawberries of the season or make a nest shaped cake. What is important is that it be appetizing and colorful!

“Pâques” is an important holiday in France: a religious one of course, but also a traditional gathering for families, religious or not. Kids go egg hunting (you can see our daughter Leyla in action), but our egg providers are a bit different: magic bells!!

And we traditionally cook a large meal with a leg of lamb, and set a lively table to honor the coming of Spring time. 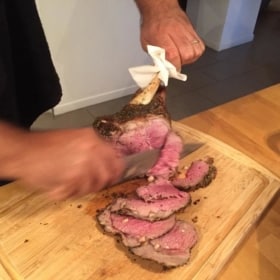