Christmas is an important religious but also familial holiday in France, and there are many French Christmas traditions. So let’s talk about Christmas in France

I lived both in France and the USA, so in this article I will pinpoint the French Christmas traditions, and often point out what’s different with my experience in the US. Should you have more questions about Christmas in France, don’t hesitate to ask me in the comment section below, it will be my pleasure to try to answer them.

How Is Christmas in France?

If you were to stroll the streets of France in December, would you know it’s Christmas time?

Yes, you would… but maybe less so than in other countries – I’m thinking about the US there, where I lived.

So Christmas is definitely in the air… but maybe a little bit less than it is in other countries: I lived in the US for 17 years and over there, Christmas was everywhere !!

Is There a Strong Christmas Spirit in France?

Although the French don’t necessarily decorate the outside of their houses with une guirlande électrique (string lights), French towns and villages usually do have some Christmas lights. A large Christmas tree next to the city hall or on the city main square is also customary.

Stores in France usually have some kind of Christmas decorations, although it may be subtle. Typically, stores don’t play Christmas songs – at least not to the extend of what I experienced in the US. But I’ll discuss this more below…

Strolling the big department stores in large cities in France, like “les grands magasins” in Paris at Christmas time is really a pleasure: the Christmas tree at “les Galeries Lafayette” is spectacular, different each year and worth a detour! 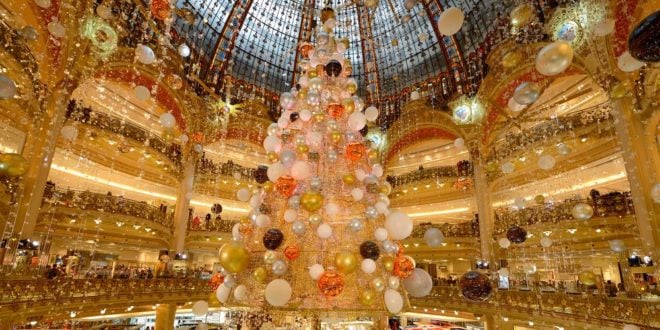 Are There Christmas Markets in France?

There’s a big one in Paris on Les Champs Elysées: it really brings a Christmas feel to the city.

When Do the French Say Merry Christmas?

When I lived in the US, I was surprised to hear people wishing each other ‘Merry Christmas’ or ‘Happy Holidays’ starting the day after Thanksgiving.

How come? Maybe it’s because France is such a secular country… Christmas is a religious holiday after all… Even saying “Joyeuses fêtes de fin d’année” – ‘Happy Holidays’ in French – is not as wide spread as I experienced it to be in the US.

This being said, it wouldn’t be a faux-pas to wish someone ‘Happy Holidays’ before Christmas’ week. It’s just that the French seem a bit more discreet about it.

To learn ten different ways to wish someone merry Christmas in French, I invite you to follow the link to my free lesson with audio.

When Do the French Celebrate Christmas?

The date for the Christmas celebration in France is a bit flexible.

The Christmas meal in France is called “Le Réveillon de Noël” and traditionally used to be held late in the night on December 24th, as people return from the midnight mass.

But, things change and now, many French families have their traditional Christmas meal on December 25th, or earlier in the day on the 24th.

More about the true date of Christmas in France in my article: I’ll explore when the French hold their Christmas family reunion but also when the typical French Christmas mass are celebrated.

French people do send out Christmas greetings and wishes for the new year, but it’s a tradition which is fading away.

The thing which is popular right now is to send out an end of the year recap, often on social networks such as Facebook.

“Les Etrennes” is the French tradition to give some cash or a nice and somewhat valuable present to people who provide services for you such as the mailman, firemen, garbage collectors, your cleaning lady…

It’s not compulsory but it’s a strong tradition in France. Around Christmas time or the New Year, collective service providers may go door to door and sell a calendar for a fixed price (but you can always give more, or just hand cash and not take the calendar…). They may also not sell anything and just say “nous venons pour les étrennes”. It’s then customary to give them a bill, the amount of which is totally at your discretion.

Some service providers never ask for anything. It’s the case of the garbage collectors. So I usually wait for them to come by and then get out and prepare 3 bills of 10 Euros and hand one bill to each person in the truck. To be honest, I don’t know how “legal” this all is, but hey… Their work is hard and they appreciate the gesture and the thought.

For a household employee such as a cleaning lady or a gardener, you’d give a bit more. Half a month to a full month of salary is customary. In cash 💶 💶 💶

It used to be that “les étrennes” were given only after the New Year. But’s it’s no longer the case. We now give “les étrennes” anytime between November and the end of January.

“L’Avent” (pronounced exactly like “avant” (meaning before – not the t silent for both) is a religious tradition which dictates that starting four Sundays before the coming of Christ, Christians prepare mentally for his arrival.

This period is symbolized by a big wreath with a candle une couronne avec une bougie, and a special calendar called le calendrier de l’Avent with a little nook for each day which hides a little treat: an image, toy or candy. You’re supposed to open one slot every day: this helps kids countdown till Christmas and teaches patience.

Each year, the exact beginning date of the Advent changes since it starts on the 4th Sunday before the 25th. Well, in theory. In practice, most French Christmas Advent calendars start on December 1st (and end on the 25th).

What is “La Crèche”?

“Une crèche” – a Christmas manger in English – represents the night of the birth of baby Jesus. The essential characters of “la crèche” are Mary, Joseph, baby Jesus, usually a donkey and an ox, sometimes the 3 kings.

My daughter Leyla and I made our own Christmas manger with polymer clay: we had so much fun and it’s now a family treasure. What do you think? 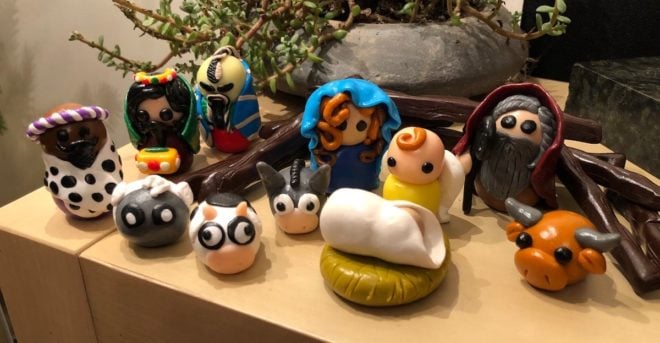 When Do the French Set Up Their Christmas Tree?

If you want to follow the Catholic tradition, Un sapin de Noël (a Xmas tree) shouldn’t be set up before Christmas Eve, so on December 24th. It should be taken down twelve nights after, for the Epiphanie (the visit of the Kings).

In reality, there is no fixed date. I like having a Christmas tree around the house, and mine is a fake tree (although fresh trees are still very popular in France) so I often set mine up on Thanksgiving! (Thanksgiving is not a French tradition by the way)

You may enjoy this video I made about Christmas in France, especially the Christmas decoration. Turn the CC on/off in French and/or English with the wheel of options located on the bottom right of the YouTube screen.

What Are The French Christmas Present Traditions?

Like in many countries, the French exchange presents for Christmas – Faire des cadeaux.

Traditionally, we don’t hang stockings on the fireplace around Christmas time in France.

So where does Santa put the gifts? In France, Santa puts the Christmas gifts in shoes we place by the fireplace, as demonstrated in the Tino Rossi’s song – Petit Papa Noël

However, it’s not a very respected tradition. Nowadays, the numerous Christmas gifts are usually placed under the Christmas tree, or next to it. And you may even see a few stockings hanging down the mantel (if you are lucky to have a fireplace that is!).

Even if they tend to be expensive, it’s really fun to roam the market and gaze at everything and Christmas markets are very popular among French people.

What about sending a French gift to your friends for Christmas?

Now with Amazon.fr and many other websites delivering all over the world, it’s not difficult finding a French / France related gift for your Francophile friends. A French Christmas tree ornament is a good idea, or maybe some magnetic French poetry words.

🎁 But the best gift of it all would be a downloadable French Today’s audiobook to learn French like it is spoken today. Don’t you agree? :-)

Are There French Christmas Carols?

Although we do have many Christmas songs (watch a video of my daughter Leyla singing “Petit Papa Noël”), caroling in the streets is just not a French tradition.

Actually, we don’t even have a term for it other than chanter des chants de Noël (to sing Christmas songs)… It’s sometimes done in some cities – I mean nothing forbids it – but caroling is not a typical French tradition.

Who is the French Santa Claus?

In Northern-Eastern France, Santa – Le Père Noël – is often replaced by Saint Nicholas, and the gifts brought out to children on December 6th.

Learn about the French Santa and practice your French with my bilingual article. 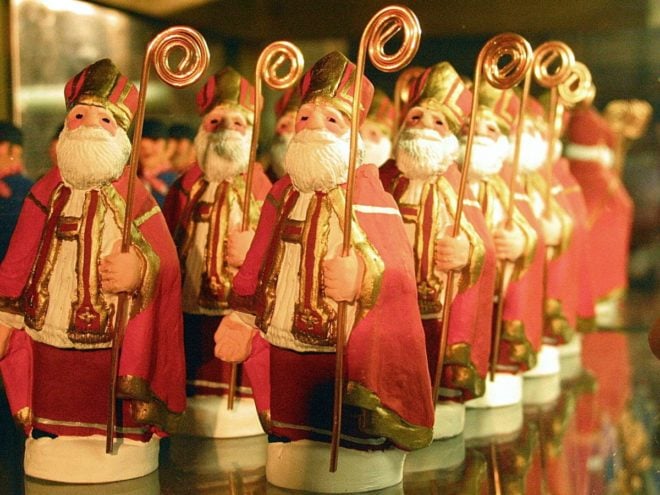 With so many culinary delights in France, it’s hard to figure out what kind of food French people really eat around Christmas.

Don’t believe everything you read! If oysters and Foie-Gras are a sure thing, fresh truffles and caviar are still very much for the wealthiest… And have you ever heard of the French thirteen Christmas deserts?

There’s so much to say on this subject that I wrote an entire article sorting out the myths and realities of the typical French Christmas meal.

That pretty much ends the long list of French Christmas traditions, but that doesn’t mean the Season’s festivities are over..

I invite you to read my articles about how the French celebrate New Year in France.

Wait! It’s not Quite Over Yet!!

On January 6th, the French commemorate the visit of the 3 kings with a special cake: la galette des Rois. There is a whole tradition about it: you need to know about it if you don’t want to lose a tooth!!