Truths and Myths Of The French Christmas Meal 🎄 🥂

With so many culinary delights in France, it’s hard to figure out what kind of food French people really eat around Christmas. Oysters and Foie-Gras are a sure thing, but fresh truffles and caviar are still very much for the wealthiest.

We do have many Christmas traditions in the different regions of France, and so much food to choose from ! So, it’s true that, in general, the French tend to feast and splurge for their Christmas meal.

However, there are many exaggerations about what dishes you may actually find for Christmas at a “regular” French table. So, let’s start debunking the truths and myths of the French Christmas meal.

Table of Contents
A Pretty Table and a Fancy Home Meal
Oysters, Scallops and Smoked Salmon For Christmas in France
Seafood Platter For Christmas? A Bit Risqué
Foie Gras For Christmas in France Is A Given
Lobster, Fresh Truffles, Caviar – Still Just For The Wealthiest
Fowls and Game Meat Are Popular Around the Holidays in France
Roasted Ham or Turkey – A Cheaper Solution For Large French Christmas Tables
Thirteen Desserts – A Unique Provençal Tradition
La Bûche de Noël – The Quintessential French Christmas Cake
Do French People Go Out to a Restaurant for Xmas?
What About Prepared Food For Xmas in France?
Champagne and Good Wines Will Be Served At Christmas Time
Typical Christmas Food French Vocabulary

A Pretty Table and a Fancy Home Meal 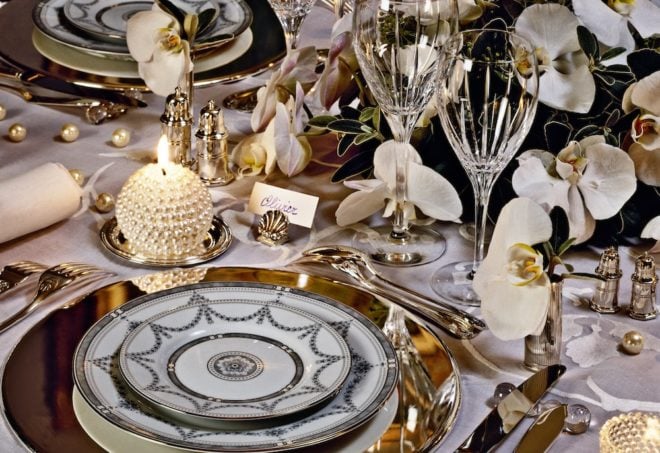 The thing you can expect for sure is that the French will make a big deal about their Christmas meal.

The table will be set with lots of care, even for a family meal. We really like to set a pretty table in France, and this is a strong part of our French culture and tradition.

The Christmas dishes will have been carefully planned, and chances are that the cook will fancy trying something daring, and push his/her culinary abilities. The presentation will be also refined.

The idea is not to show-off (well, maybe just a little…) but to please your guests and family, show them your love and care by treating them to an excellent and beautiful meal.

Oysters, Scallops and Smoked Salmon For Christmas in France 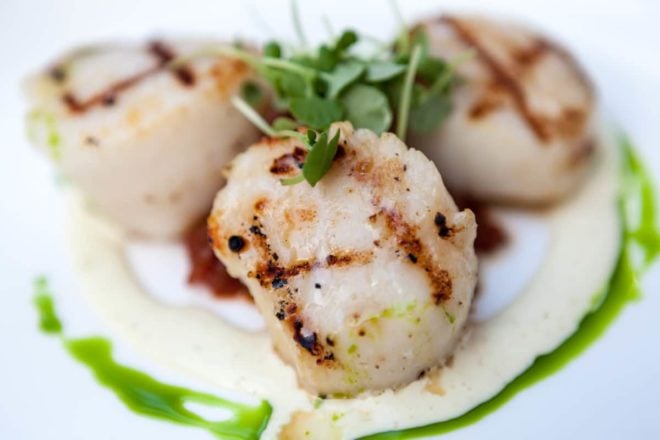 Smoked salmon is a popular dish around Christmas, and it’s price is really reasonable. To bring it up a notch, we may serve it over “blinis”, a buckwheat pancake readily available in a small size in all French supermarkets. Add a bit of heavy cream, a thin slice of lemon and a touch of fresh “ciboulette” (chive) or “annette” (aneth) and you have a pretty, tasty, and super easy to make “amuse-gueule” (literally “amuse your mouth” – savory bite).

France having a lot of coastline, oysters are easy to find, and also a popular – and sometimes relatively cheap – dish for Christmas. We serve them fresh with a squeeze of lemon or a red wine and shallot vinaigrette, or we cook them for a fancier version – poached in wine or oven roasted…

Many people love oysters – unfortunately Olivier and I don’t which is really too bad since here in Brittany, we are in prime oyster producing region and they are everywhere around us – literally, on the rocks at the beach!!

What we have plenty off here and which we do love are scallops: “les coquilles saint-jacques”. Another very popular ingredient for the holidays in France. In our region, they are really affordable if you open them yourself (here is Olivier’s video showing you who to proceed to open a scallop). In Paris, they get quite expensive.

A nice seafood platter is also a typically French Christmas dish – but it can become pricey quite fast, especially if you have many guests. Furthermore, it’s not the most practical / elegant food to eat. French table etiquette is quite fancy.

Not everybody can peel a shrimp with a fork and knife, and you don’t want to be elbow-deep into a steamed crab at the Christmas table !!

Foie Gras For Christmas in France Is A Given 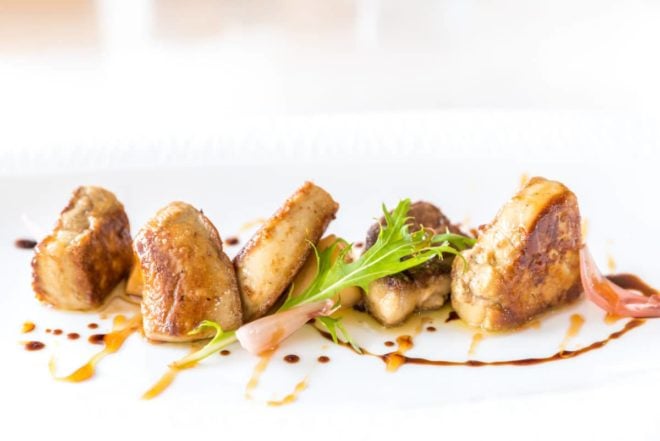 The dish you can certainly expect around Christmas in France is foie-gras. Just visit a French supermarket during the holiday season and you’ll see how overflowing with foie-gras the central food aisle gets!

Foie gras is mostly served as a paté over warm toast, but there are many other uses for it: Olivier likes to serve sauteed scallops with a foie-gras sauce for example, but it’s also widely use with meat or game meat, sliced over/ under it, or as a sauce.

You may also pan roast some fresh foie-gras. It’s a bit too much for my taste buds, but considered a delicacy, and very popular for Christmas or New Year in France.

Both my father in law and Olivier make their own foie-gras paté. Didier does a traditional version when Olivier has invented a recipe with a Japanese twist to it: plum wine and five spices! I love it but it’s not to everybody’s taste and we received some frowns from “French purists” over the years – LOL :-) 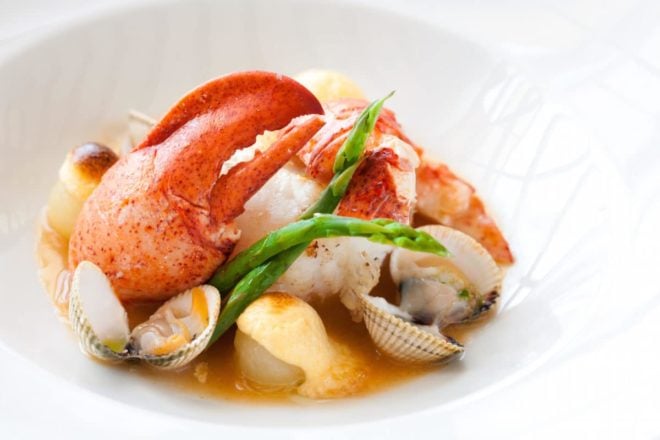 These delicacy are still super expensive in France. So forget it if you have a large numbers of guests for Christmas.

Even for a couple, a decent portion of French lobster is going to cost minimum 30 Euros… So yes, the French typically splurge for their food, especially during the holidays… but these find produce is still very much reserved for the wealthiest.

Note however that you will easily find “some” (trace) of truffle in a prepared foie-gras paté or other French charcuteries… Believe me though when I say it’s nothing compare to a real fresh truffle.

Olivier once received one as a gift (from one of our students actually :-) and served fresh scallops and fresh truffle over fresh pastas and coral sauce… It was really delicious.

And don’t even get me started on caviar… There are many different types, and what we call “caviar” in France is not salmon or lumpfish roe (des oeufs de saumon ou de lump) ! Caviar in France means Beluga, Osetra and Sevruga… They cost an arm and a leg, and most French people have never had any.

I was lucky to try a (tiny) sampler (for my thirtieth birthday), and of course, prefer the most expensive one: beluga (typical for me, a bad habit :-)

Fowls and Game Meat Are Popular Around the Holidays in France

Game meats such as “le cerf” (venison) are a popular dish for Christmas in France – or maybe a fancy beef roast, maybe “un rôti en croûte” (roast in a crust of dough, like a beef Wellington), like my father in law often makes.

Other fowls such as “les cailles” (quails – you can stuff them with foie-gras !!) or “le faisan” (pheasant) are also quite popular.

I’ve heard of goose “une oie”  being cooked for Christmas – I’ve never had it myself. 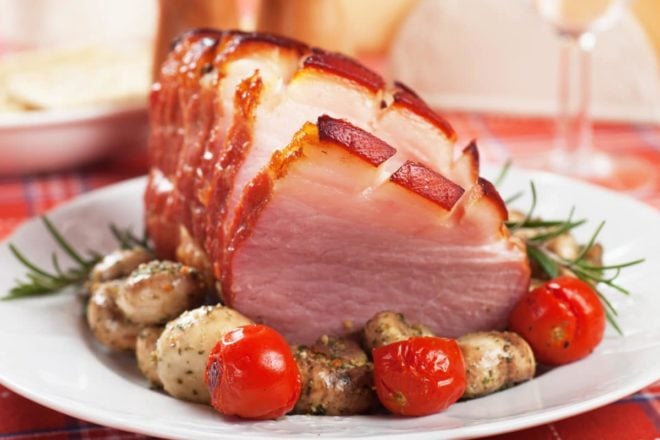 So, what do you cook for Christmas when you have a large sized family? Typically, a large chicken, “un capon” (chapon) or maybe a turkey. Or a roasted ham. This is what Didier did for us last Christmas – miam!!

The typical way to serve turkey in France for Christmas will be with a chestnut, veal and parsley stuffing (really actually stuffed into the bird :-)

The web is always raving about the “Thirteen Desserts” French Christmas tradition. But it’s not usual at all in France! It’s a typical tradition from Provence, but it’s not common in the rest of France.

There are many, many regional traditions in France: “Bredele” and “Kougelhof” in Alsace Lorraine, a cake called “bras de gitan” in Catalogne, goat with corn and polenta or sea-urchin omelet in Corsica… Unless your family comes from these regions, it’s unlikely a French person would know about these regional French Christmas dishes.

Even though it’s not a very refined cake, and many other French pastries are more complex and tasty if you ask me, la bûche de Noël is really the quintessential French Christmas dessert.

Thankfully, they now sell frozen ice-cream in shape of a log, which are often served instead of this quite heavy cake…

I’m spoiled you may think, but after one, two or three bûches de Noël in one season, you simply have enough!

Do French People Go Out to a Restaurant for Xmas?

Traditionally, Christmas is celebrated at home.

Yet many restaurants do offer a special Christmas menu, so I guess a number of French people do go out for Christmas. If you plan on going out on Christmas eve or day in France, I strongly recommend you check what restaurant is open, and book ahead of time!

What About Prepared Food For Xmas in France?

Here again, typically, the Christmas meal is a home cooked meal in France. Lot’s of French people enjoy cooking, but that doesn’t mean everybody is a chef! For this special occasion, the wealthiest may use a caterer (un traiteur).

There is a store specialized in frozen food which is very popular in France. It’s called “Picard” (just like Jean-Luc ;-) and they offer an amazing selection of frozen quality produce and ready to cook dishes for Christmas. And of course, all sorts of frozen bûches – we will certainly get one there for our Christmas meal!

Champagne and Good Wines Will Be Served At Christmas Time

In France, one thing is certain, you have access to excellent wines. And there is no feast without a special bottle (or many) – the good thing is that in France, you can easily find a decent bottle for a decent price.

French Champagne is still relatively expensive, so many French people will serve “crémant”, which is a much cheaper sparking wine version.

Yet, for Christmas, if they can afford it, French people are likely to splurge and indulge into a true Champagne, even often a well-known house such as Veuve Cliquot, Roederer, Moët et Chandon…

I absolutely love Champagne myself, so I’m very much looking forward to drinking some around the holidays! 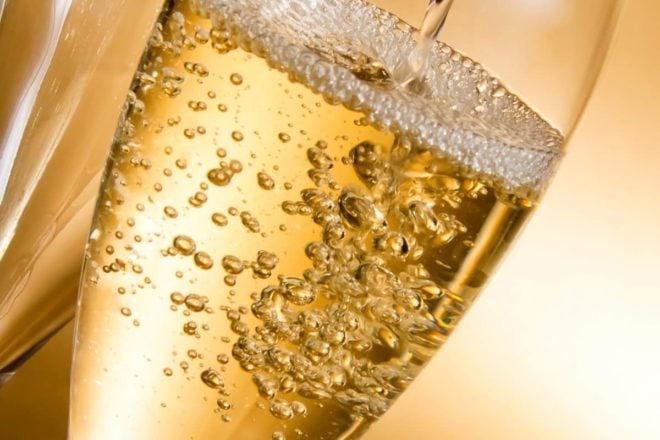 Now for those of you studying French, here is some of the French vocabulary used around Christmas food.

If you are invited to a Christmas meal in France, my article on how to comment positively (and negatively) about food in French could be handy!

Now, the only remaining question is when do the French have their Christmas meal – December 24th or December 25th ? I let you read my article to find out!

What about you? Care to share some of your country or region Christmas specialty? Leave a comment below – I love reading comments and they do encourage me to write some more.