“La Charcuterie” – Vocabulary and How to Eat French Cold Cuts

What is le saucisson? What are common French pâtés? Learn the French cold cuts vocabulary “la charcuterie” and find out what’s in your plate and how to eat it.

Cold cuts are very popular in France, but as it’s often the case with sausages and pâtés, it’s not easy to tell exactly what you are eating…

The other day, we had American guests. Here is the cold cut platter we served : it’s a pretty traditional French charcuterie selection.

I’ll explain what it is and give you tips on the way to eat it with respect to French table manners.

What Are the Most Popular French Pâtés?

Despite what you may think, le foie-gras, the world-famous French pâté is not the pâté we usually eat at home: it’s a luxury food which is quite expensive: we enjoy eat for our French Christmas meal and other celebrations.

What’s the Most Popular French Pâté? 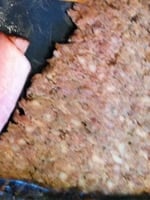 The most popular French pâté is probably “Le Pâté de Campagne”: it is made from pork meat and fat, and a bit of pork liver.

We have all kind of pâtés in France : most are made with pork meat, but other may include:

If you eat pâté during an informal meal, you usually cut a piece with your knife and spread it over a small slice of “baguette“, which you’ll then eat holding it with your hand in a couple of bites.

You could also make a sandwich with it, but not in this style of luncheon. 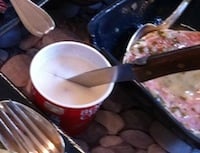 Les rillettes are a shredded pork meat pâté, quite fatty, and you spread it on bread.

The jar comes with a layer of fat on top that you usually remove in your plate.

Spread it over a small piece of bread, then eat it with your hand delicately :-) 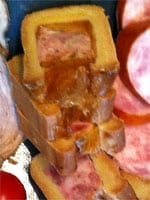 This mix of pâté and pastry is made with pork and veal, but could have other meats, and surrounded by a crust, and usually a bit of savoury jelly.

You cut it with knife and fork and eat it like that. Yummmm !! 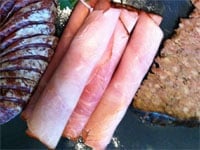 You know that one : it’s white ham, “du jambon blanc”. Eat with fork and knife.

Note that in France, we differentiate “jambon blanc” (the cooked version) and “jambon cru” or “jambon sec” (the uncooked and smoked/aged versions like prosciutto, parma or bayonne).

The ham may have a greasy edge that you may remove with your fork and knife and leave on the side of your plate.

This French cold cut is made with the nose part of a pig – but you wouldn’t know if I didn’t tell you.

It tastes like ham and is sold/served in a French Vinaigrette or  dressing.

Eat it with fork and knife.

As you were learning French, you probably heard about “le saucission”. But What is it exactly?

What is Le Saucisson? 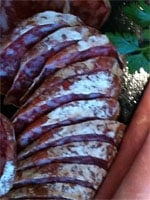 We usually remove the skin before eating it, alone (fork and knife) or with a bite of buttered bread (delicately holding the bread and piece of salami in your hand).

Actually, if I was a good hostess, I should have removed the skin before serving this. But sometimes the skin is hard to remove, which was the case that day!!! So I left it… 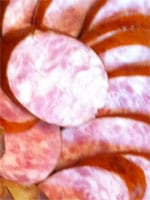 You eat it alone or with a bite of buttered bread. 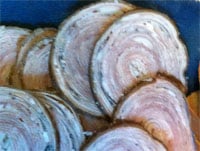 Watch out for these ones: the French andouille is not like the New-Orleans Andouille. The French one has quite an… acquired taste! It’s made with tripes, a French offal, and it has a pretty strong taste.

You usually remove the skin. Eat “l’andouille” alone or with a bite of buttered bread.
“L’andouillette” is usually served warm and eaten with your fork and knife.

Now we often serve some greens to go with cold cuts in France.

It’s common to accompany cold cuts dishes with veggies… could be a green salad… but here are the vegetable dishes we served to our American guests.

And of course plenty of crunchy French bread!

As will all asparagus, the tip is very tender, but the end can be quite fibrous, so sometimes you don’t eat the end.

Eat with knife and fork.

Tip: In France, you commonly find these white Asparagus ready to eat in cans or glass jars. My father-in-law (a professional chef) always saves some of the water from the container to make the dressing lighter and tastier!

Shredded celery with a ton of mayo (as fatty as charcuterie if not even worse…).

Eat with knife and fork.

Hold on the green part or the radish, eat the red and white part: put a bit of salt on your plate, bite the radish, dig it in the salt, bite again (it’s your plate, double dipping is allowed!), you may at the same time take a bite of buttered bread.

Leave the green part in your plate.

And of course, eat “des cornichons” (gherkins) at will with all the charcuterie, and drink a lot of French wine!!