Follow this easy French crêpe recipe to learn how to make delicious golden French crêpes and even flip these thin French pancakes like a pro!

Crêpes (sort of French thin pancake) are a very common food in France and are not only easy to make but can be served any way you want. This allows the whole family to eat exactly the crêpes that they want…

What is “la Chandeleur”?

La Chandeleur (on Feb 2nd), is a French holy day where most French households will eat crêpes at dinner time.

This French tradition finds its origins in an old Roman ritual of harvest & fertility.

The crêpe is round and golden, reminding us of the sun to come, whose warmth will make the harvest possible…

What is the Difference Between “Une Crêpe” and “Une Galette”?

“Ma Doué !!” (Oh My God) would say a Breton (a native of Brittany where crêpes and galettes come from)…

Answering this question opens up a can of worms.

French Crêpe vs. galette in France

For the common French folks: 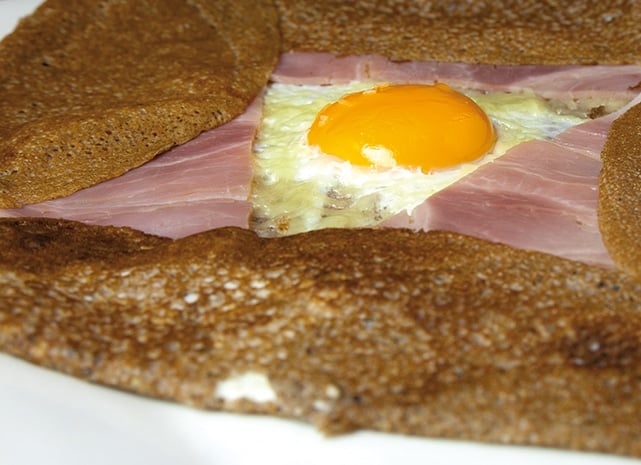 But of course, most Bretons won’t agree on that, since for them, the name depends mostly where in Brittany you are from… And the size and thickness of the French pancake.

French crêpe vs. galette in Brittany

In lower Brittany, they say :

In upper Brittany and Rennes region, we say:

Note also that the word “des galettes” can refer to cookies, especially in… Brittany!! “Les galettes de Pont-Aven” are quite famous. And then, there is also “la galette des rois”, the French King Pie.

Finally, in Quimper, another place in Brittany, one of the many specialties is “des crêpes dentelles”: a dried crêpes with sugar folded up and sold like crispy and delicate cookies.

Let’s see the ingredients you will need to bake French crêpes. 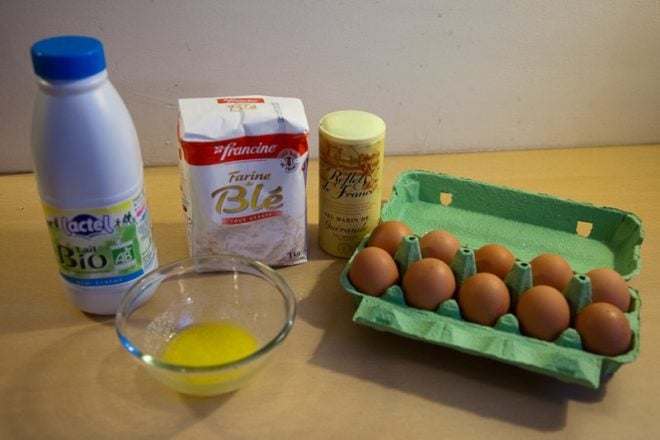 For a ‘universal’ crêpe that you can eat both in a savory and sweet variation you’ll need these ingredients:

If you are only making dessert crêpes, then feel free to add one (or more) of the following:

To prepare “la pâte à crêpes”, put all the ingredients except the butter in a large bowl and using a hand mixer, mix everything until smooth.

The consistency of the batter should be like that of a thick syrup.

Ideally, you should let the batter rest for 30 minutes or so but if you are in a hurry or if it’s Sunday morning and the whole family is starving, then it’s ok to start them right away.

This is the perfect recipe to make with your kids, here’s Leyla age 5 “la main à la pâte” (French idiom meaning literally the “hand to the batter” which is very appropriate for this recipe! Regularly, this idiom means ‘in the process of helping out’) 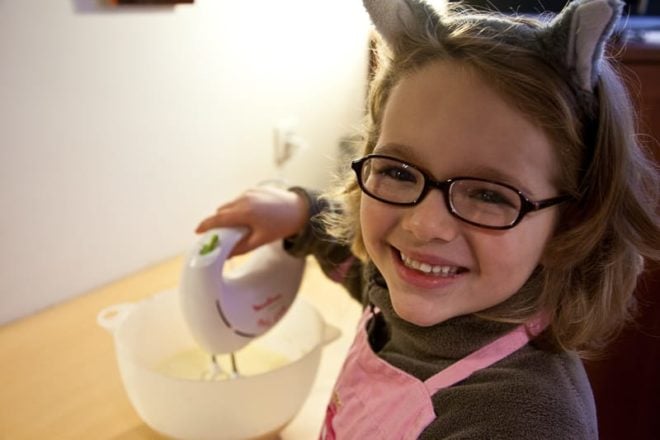 Before you start making the crêpes, you should prepare your pans – with an S.

Unless you are by yourself or have plenty of time to spare, it’s much easier to have 2 or 3 (or 4!!) pans going on.

If it’s your first time baking crêpes, you may want to start with one pan at a time until you are comfortable with all the “moves”.

Your pan HAS to be a non-stick pan, don’t even bother with any other kind. You’ll also need to turn on you oven to the lowest setting and get a flat heat resistant plate or pan with a clean kitchen towel ready.

Last but not least, you’ll need:

Interested in learning French in context? My French learning method features realistic stories: many dialogues talk about food / take place at the dinning table or in a restaurant.

Now I’ll guide you through the different steps needed to bake the crêpes.

How To Bake The Crêpes?

Baking French crêpes is really easier than you think. Even the flip! Try it! You can do it! 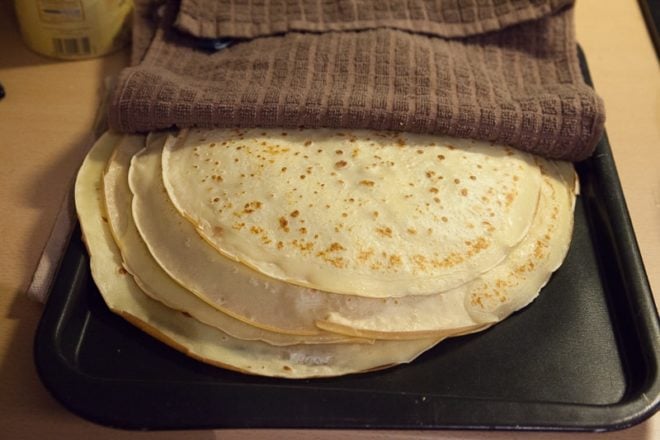 Usually, you make crêpes a whole meal starting with 1 or 2 savory crêpes and then the rest as dessert crêpes…

To make it easier on you, first, finish all your crêpes and keep them warm.

Then you can get started on the savory preparation, the most famous and basic being the “œuf, jambon, fromage”.

(By the way, do you know why the French only use 1 egg per crêpe? Because one egg is un oeuf… get it? (sounds like ‘enough’) 🤣 Here are more French jokes with audio recordings. 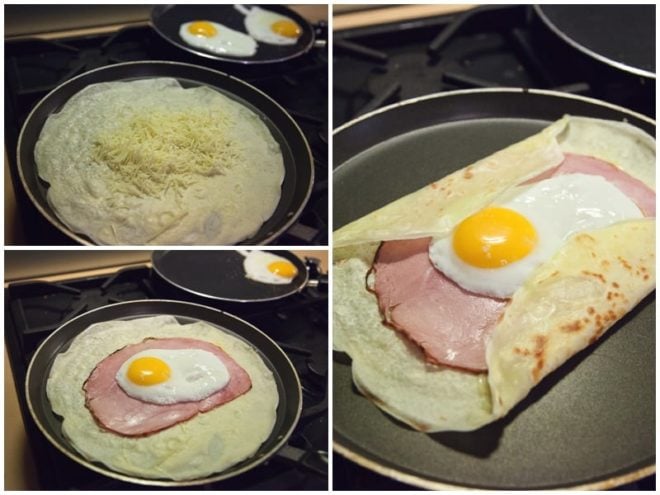 Usually, a French family will set up their whole sweet pantry on the table and let everyone make their own preparations.

My favorite is sprinkling some powdered sugar, a little rum, flambé it and then a squeeze of lemon juice. YUM!

If you’re going to make crêpes, I suggest you follow these rules that come from my 40+ years making crêpes!

Aha… we had some questions from our followers…  Olivier did the crêpes following his recipe again, and here are more tips in the video:

Flipping a French Pancake is so Easy a Kid Can do it!

And finally, some slow-mo flips, just for the fun of it! We told you it was so easy even Leyla could do it!

For those among you learning French, you may enjoy this French vocabulary.

Here are some essential French words to order crêpes and galettes in France.

How to order a Crêpe in France?