Order wisely! Learn everything about offal in French: the French organ meat vocabulary, as well as widespread French dishes that feature variety meat.

Tripes, chicken hearts, brains… one of my students’ biggest fears when going to France is ordering one of these variety meats, or organ meats (referring to the internal organs and entrails of animals).

As disgusting as this may sound to some, many of these meats are considered a delicacy, and are indeed common in French cuisine.

1 – How do you say Variety Meats in French?

To say that you don’t want offal, say:

To say: does this dish is organ meats based, say:

To say: is there organ meat in this dish, say: 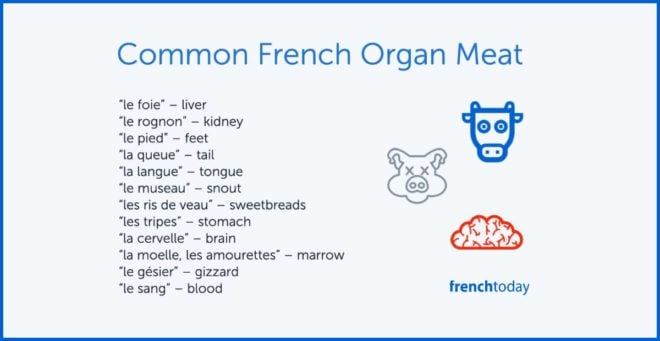 5 – List of Other Organ Meats, Rarely Used in French Cuisine 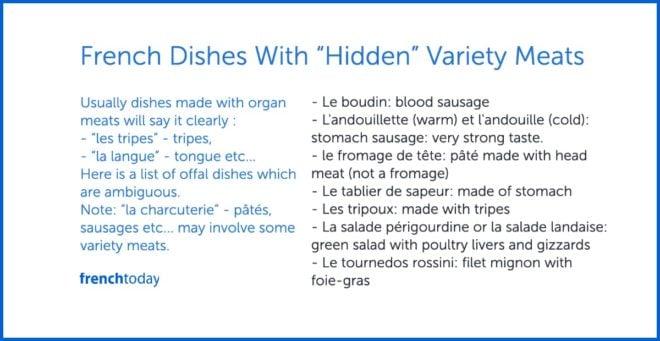 As you will be happy to see,  only a few dishes have names that don’t reveal their content… most of the time, once you know the words of French variety meats listed above, you’re safe since they will clearly appear in the title:

Now I’m not going to list dishes that clearly state they are offal based: they are easy to spot and would be too numerous to list.

Beware of local specialties which might not be listed here: always ask what is in them.

In the “charcuterie” world (see my post about French charcuterie), you are pretty likely to run into some use of offal, so if you don’t want to risk it, stay away from all pâtés, terrines, sausages, cold cuts unless you know exactly what you are ordering. 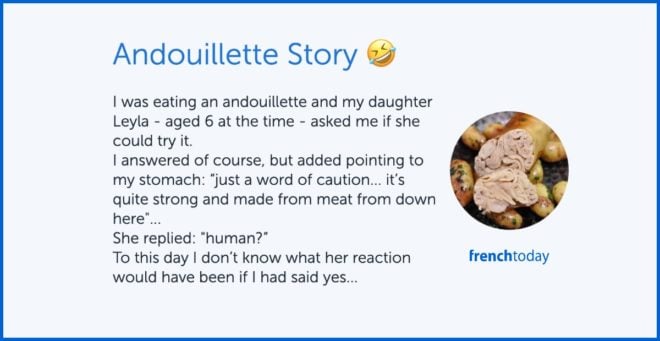 Many French people don’t like “les abats”, and usually, the French are aware that foreigners may not be OK with them as well.

So don’t worry, it’s unlikely someone would serve you “des tripes” at home on your first meal with them.

However, “un paté” with some grounded liver in it would be very common and most French people would not consider that as organ meat since it’s so common in French – and international cuisine.

Try it! You will probably not notice it at all.

French gastronomy includes many, many things – you’ll have plenty of choice, including some vegetarian options, so don’t be afraid, and if you can stomach it, I encourage you to be bold and get out of your comfort zone. You’ll never know if you like it until you try it, and if you don’t like it, then there is always excellent bread and butter on the table :-)

On the contrary, you are eager to taste some of these dishes, here is a page of recipes made from offal: http://allrecipes.fr/recettes/abats-recettes.aspx?page=1