How do you celebrate New Year In France? What do the French do, wear, eat on New Year’s Eve? What’s on TV? When and how do you say Happy New Year in French?

New Year’s Eve is celebrated in many countries around the world. Each has its own traditions, and of course, France has many special traditions for celebrating the New Year.

Let’s see what French people usually do on New Year’s Eve. First, I’ve listed and recorded for you the French vocabulary we use around New Year’s Eve.

The Typical New Year greetings are:

Here are some French terms and expressions you’ll hear around the New Year in France:

Click here to read my article about making New Year’s Resolutions in French.

Here is our New Year’s wishes – from Olivier, Leyla and me.

Now let’s see how the New Year is typically celebrated in France.

How Do You Celebrate New Year’s Eve In France?

So let’s see how the French truly celebrate New Year.

What To Expect At A New Year’s Eve Party in France?

New Year’s eve has more of a party vibe in France, and it’s often spent with friends rather than family.

A big New Year tradition to kiss at the stroke of midnight under le gui (pronounced hard G + ee = mistletoe).

Except from this, we don’t have special traditions in France about New Year’s Eve, except counting down to midnight sharp, when everybody kisses everybody else, cheers, aplaudes, throws confettis and other party streamers (des confettis, des cotillons), blows on whistles (des sifflets) and whistles with a streamer attached (des serpentins)…

What’s The Typical French Food For The New Year in France?

It’s also traditional to serve a turkey, or a goose, or cornish hen. Scallops and lobsters are also popular, so is game meat like venison.

In other words, French chefs will bend over backwards to entertain their guests and serve only the best of the best of French produce and cuisine.

Do People Go Out For Diner for the New Year in France?

Yes, the French often go out to restaurants for their New Year meal.

Our New Year’s meal is pretty much the same than the French Christmas meal.

Restaurants will offer a special (and pricey) set selection of festive dishes (the set selection is called “un menu“, not to be mistaken with the menu which is “la carte“) 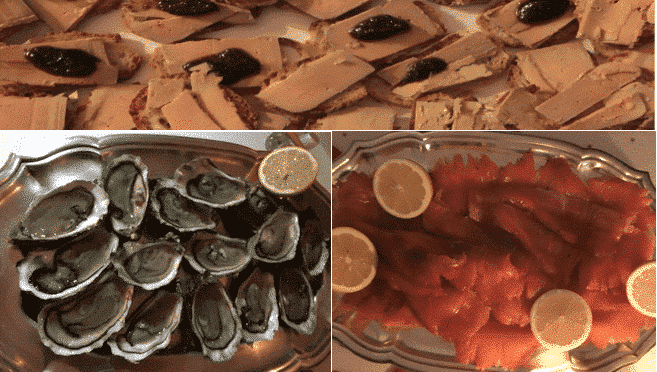 How do French Villages And Towns Celebrates The New Year?

It’s not unlikely for cities to organize fireworks (des feux d’artifice) or a danse (un bal populaire), or even a parade of some sort.

However, if New Year’s Eve tends to be a big thing in France, some people will just have a casual gathering… or snuggle up at home, maybe watch TV… Which brings us to my next question.

Is There A Special TV Program in France For New Year’s Eve?

We don’t really have a special TV program for New Year’s Eve.

There will most likely be “un bêtisier” (bloopers) and a live pop songs show, musical or a variety show… or just a really good movie: maybe even an American blockbuster!

When Do You Wish Happy New Year in France?

Strangely enough, French people don’t wish each other Happy Holidays or Happy New Year way in advance like I’ve seen it done in the US – over there, come December you greet everyone with a “Happy Holidays”, with your friends but also in stores etc…

People will say “Joyeux Noël” on Christmas Eve and day, and “Bonne année” the week after the New Year, but that’s about it.

It’s not a faux-pas to do it, people will accept and usually politely return your wishes, but it’s just not done as much.

Wishing you all happy holidays and a wonderful new year 2021!

Did you know that in France the Holiday fun is not over until January 6th – the official end of the Holiday season in France? On January 6th, we celebrate l’Epiphanie with a special pastry: la galette des rois. Read more about it and learn an easy recipe here – bake it and let us know how it was!

And if you missed it before, here is all About Christmas (Noël) in France, and Hanukkah.

Bonne année à tous, may your 2021 progress in French be amazing :-)