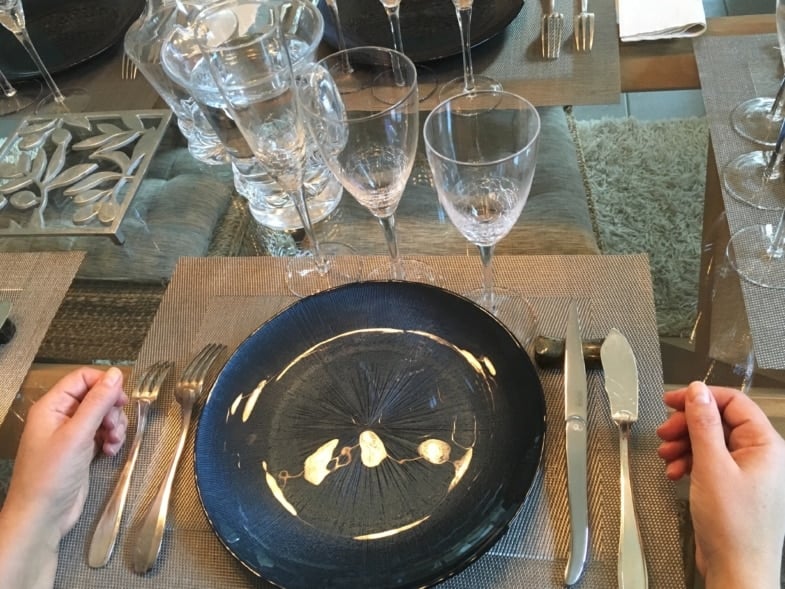 There is more to French Table Etiquette than “Bon appétit”: did you know for example that you needed to wait for your host to start eating AND drinking? The French keep both hands on the table and cheese is only passed once…

Although French table etiquette is continental, there are many habits that are quite unique to the French. Feel prepared next time you are invited to a French home or go to a restaurant in France.

I also encourage you to make flashcards to memorize all the French table vocabulary and expressions – they will come in handy.

Table of Contents
1 – General French Table Etiquette
Where should you keep your hands at the table in France?
How to Politely Hold Your Knife and Fork in France?
Fork Tines Up or Down in France?
2 – How To Indicate Your Are Done Eating?
3 – Other Tips About Silverware Etiquette in France
4 – How Do You Say Host & Guest in French?
5 – French Etiquette For Sitting at and Leaving the table
6 – How To Politely Accept or Refuse Food in French?
7 – What Should You do if You Don’t Like Some French Food?
8 – General French Good Manners

Where should you keep your hands at the table in France?

People will put their elbow on the table, rest their head in it, or cross their hands. That’s OK in a very relaxed setting, like at home, or at a barbecue or at a café, but in a fancy restaurant, or at a formal business meal, you should sit very straight in your chair, and keep both your hands on the table.

This is actually a habit that is hard to break: when I lived in the US, I was invited for Thanksgiving to the mother of a friend’s house. Of course, I wanted to show off my good side, and be polite, so tried to keep my hands on my lap to conform to the American code of table manners.

Each time I used my fork and knife, or drank, my hands went back on the table…I’d realize it and put them back on my lap. And then they’d go up on the table again… It must have been fun watching me doing this little hand dance all afternoon long!

How to Politely Hold Your Knife and Fork in France?

When holding your knife and fork (le couteau et la fourchette), your index finger should be extended on the handle. In France, we never hold our knife or fork in a fist like position at the table, even when we are cutting something.

The fork will always be placed to the left of the plate, and the knife on the right. The knife with the sharp edge towards the plate. 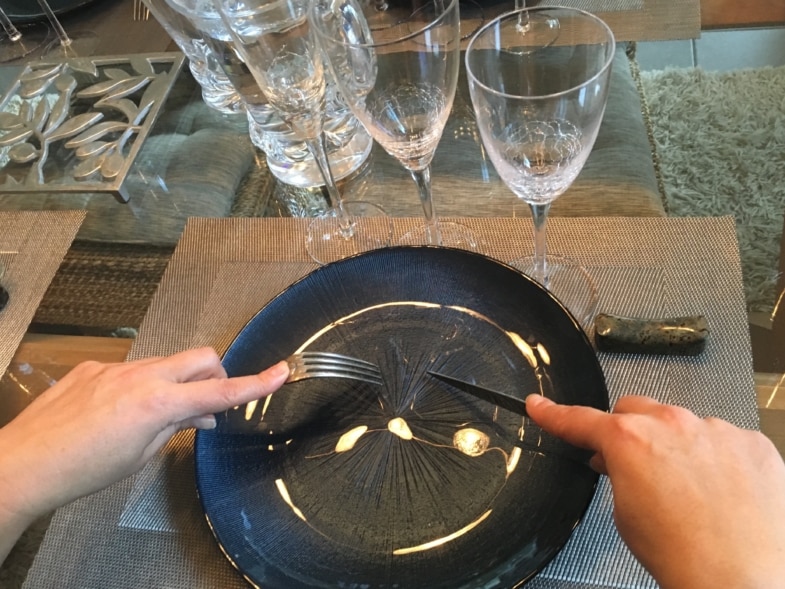 Your knife will always be used with your right hand, even if you are left handed.

If you are only using your fork or spoon, it will be with the right hand. Your knife should then be resting on the knife rest (le porte-couteau).

Then, when you are eating something that requires cutting, you’ll switch your fork to the left hand and hold your knife in the right hand.

Fork Tines Up or Down in France?

This is a tricky one, and not everybody agrees.

Most French table will have the fork tines up. I don’t really know why, some say it is not to damage the table cloth…

Other people put the tines down. If you have real silverware, there is often some pretty drawing / initials on the handle and it’s prettier that way.

As you can see on my pictures, I prefer setting my table with fork tines down, but I know this is not the case in the majority of French homes…

2 – How To Indicate Your Are Done Eating?

Between two bites, put your silverware at 4 and 8 o’clock on the plate, but not crossing, nor falling out of the plate to indicate you are still eating. 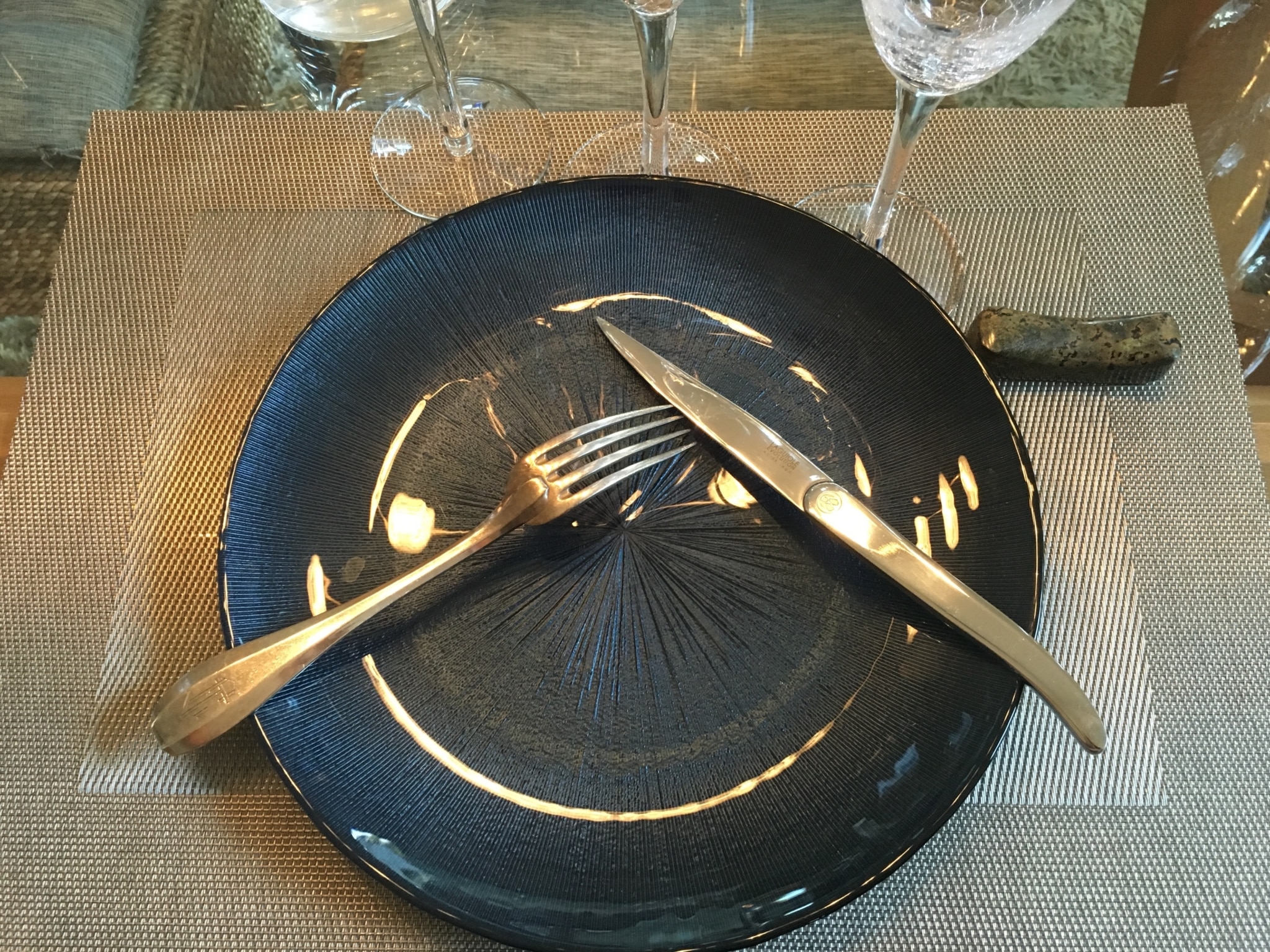 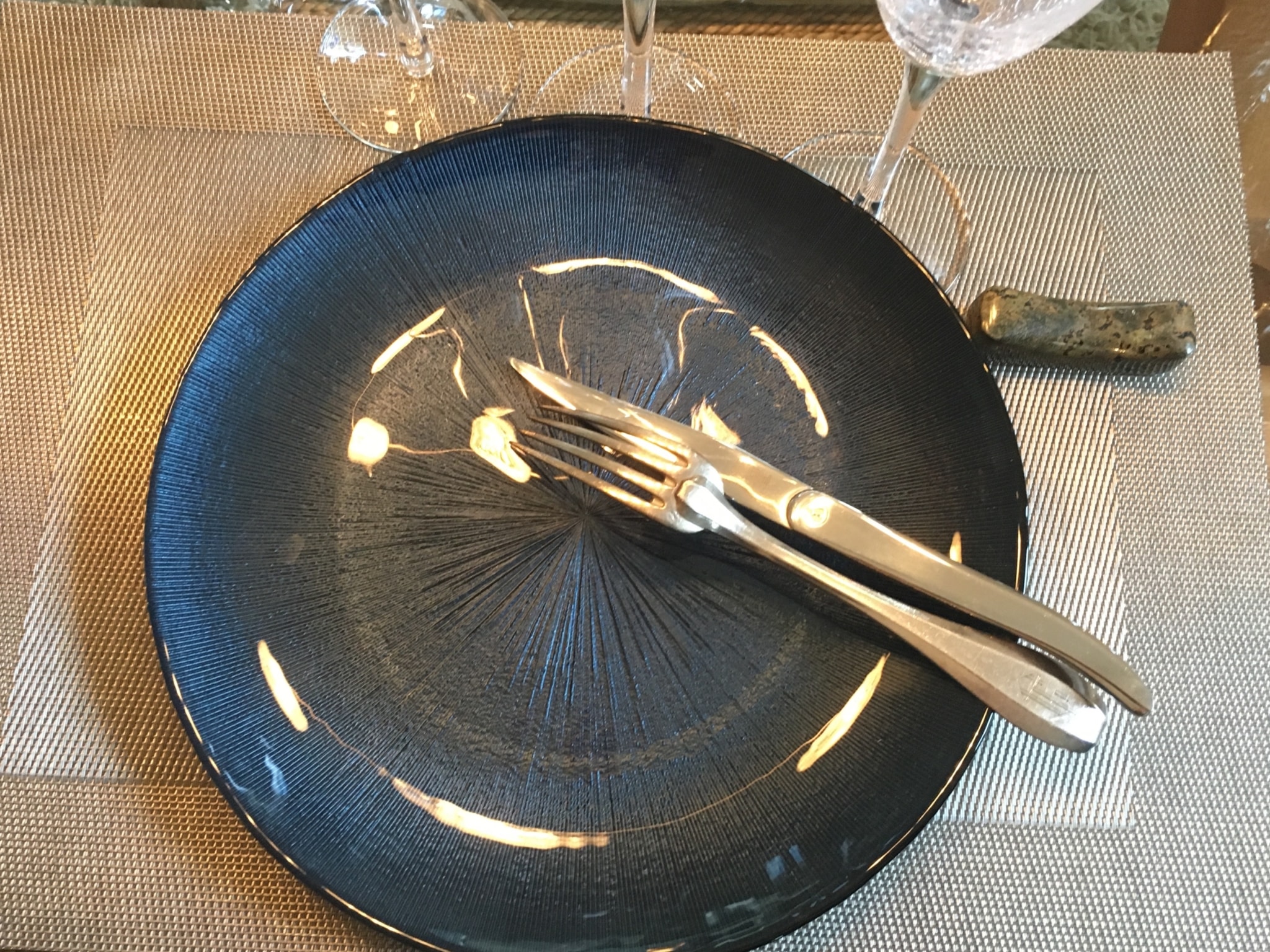 Your silverware should never touch the table when resting on the plate. If you prefer, and if they are not covered with sauce, you may also put your silverware back on the table: under your knife, you will probably have a little stand, like a chopstick stand, to rest the knife. It’s called “un porte-couteau”, and you should rest your knife on it. It will prevent the tablecloth (la nappe) from getting soiled.

When you are done, place your silverware parallel slightly to the right side: this is will indicate you are no longer eating, but it doesn’t mean the waiter will take your plate away instantaneously. Meals are a long affair in France. But, it should get things moving.

3 – Other Tips About Silverware Etiquette in France

Depending on the formality of the place, you may get several pieces of silverware (les couverts).

You may also get several different kinds of forks and knifes to the side of the plate, for fish, meat etc…

Work your way from the farthest to the closest to the plate, dish after dish. It is rather common to give a smaller knife (un petit couteau) for cheese, a smaller fork for cake and fruits, a small spoon for other less solid desserts…

To help yourself to a dish at a French home, special silverware will be offered, usually a big spoon and fork (les couverts de service), or a knife for cheese.

Help yourself, then don’t forget to put them back in the dish, then turn the dish to face the person next to you when you hand him/her the dish.

At the end of the meal, put your napkin (la serviette) by the side of your plate, without folding it.

Usually, French hosts pay close attention to the setting of the table; they carefully choose tablecloth (we have many different ones), plates and glasses to best feature the food they are preparing.

They might decorate the table with candles (des bougies) or other decorative ornaments, or take out their Grandma’s real silverware (l’argenterie) etc… 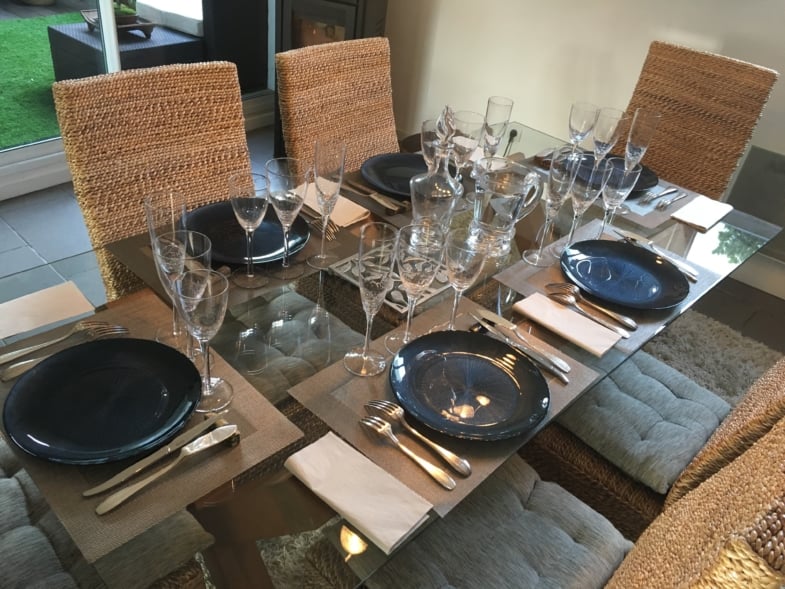 This is not to show off, but it’s part of the culture, to welcome our guests and give them the best dining experience.

It is a nice gesture to comment on the table setting “quelle jolie table” (what a pretty table setting), “oh les belles assiettes” (what gorgeous plates), “cette nappe est ravissante” (this tablecloth is delightful)…

Let’s start by explaining something quite tricky:  the word “un / une hôte” in French refers to both the hosts and the guests…

For more on this subject, I suggest you read my article on how to be a polite home guest in France.

5 – French Etiquette For Sitting at and Leaving the table

Often, the hostess will have decided on a particular order to sit the guests. There might be nametags, but usually she will show you your seat. The guests of honor should be seated to the right of the hosts, and after it always goes man, woman, man, woman whenever possible.

In France, when sitting by themselves, a couple always sits one in front of the other, not next to each other.

Men will wait for the hostess sit first – if you are a man you could pull the chair of the woman next to you, it’s still very much done in France. And when a woman leaves the table and come back, some men still stand up – that is quite old fashioned, a bit much in everyday life.

Before starting to eat, in a not too formal setting, the hostess will say “bon appétit” (enjoy your meal) and everybody will answer the same. Among younger people, a shorter version “bon ap’” is pretty common.

You should not leave the table during a meal, which might very well last several hours. Plan on using the restroom before (Here is my article on how to ask where is the restroom in French).

If a child wants to leave the table early – common in France since the meals can be so long – he/she should ask the hostess “est-ce que je peux sortir de table s’il vous plaît” (may I be excused please).

6 – How To Politely Accept or Refuse Food in French?

At home, soups, salads, cheese and fruits should be offered only once. All the rest twice.

Accepting a second serving of the main course will please your hosts, but don’t forget there is still salad, cheese and desert coming, so save some room!

7 – What Should You do if You Don’t Like Some French Food?

Eat what you like, try the rest (unless you are allergic of course), and leave whatever you don’t feel like eating neatly put together on one side.

Do not push the food apart and search and pick a couple of bites: this is considered very impolite in France.
You eat it, or you don’t.

And if you don’t eat it, don’t make a big fuss about it: no-one should comment as not to embarrass you.. If they do, say “c’était délicieux mais je n’ai pas très faim”. (it was delicious but I am not very hungry).

You should keep your hands on the table, on each side of the plate, in a relaxed manner. Palms may be down, or your hand can be on the side, but both hands should be on the table, never under the table. No elbow either, although elbows are OK in a more relaxed setting as far as you are still sitting somewhat straight.

When holding your knife and fork (le couteau et la fourchette), your index finger should be extended on the handle: don’t hold your knife in a fist like position.

Always wait for the hostess’ signal to start drinking and eating. This may look old fashioned but it’s still very much done in France: no one eat or drink before the hostess says “bon appétit” and starts eating / drinking herself.

Furthermore, it’s still quite common in France to make a toast, so it would be a faux-pas if someone did make a toast and you had already finished your glass…

Last tip: try to eat as quietly as you can. No slurping, no loud chewing… certainly no burping. Try also not to blow your nose at the table.

Also, be careful with the level of your voice, or laugh. Especially in a fancy restaurant where the ambiance can be soft and rather quiet, someone speaking a bit loud in a foreign language can really stand out.

Voilà. This should get your nicely started. If you liked this article, you may also enjoy “how to comment on food in French” or “Tips on What is Very Polite and Very Rude At the French Table“. 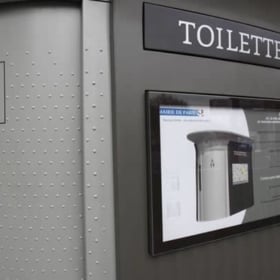