What’s the French King Cake? La Galette des Rois is a pastry with a surprise hidden inside. We eat it in January in France. Recipe & French tradition explained.

Let me tell you about the French King Cake: I’ll give you the French King Pie vocabulary, explain the French traditions for l’Epiphanie and share a Galette des Rois recipe with you. Maybe you can have one with your family?

The French King Cake is called “la galette des rois” and it’s quite different from the King Cake you’ll eat around New Orleans around Mardi Gras!

In France the tradition of serving this puff pastry and almond cream tart can be traced back to the 14th century.

Warning! Don’t Chew Too Hard on Your French King Cake!

A small porcelain figurine (la fève) is baked inside the cake and whoever receives the little favor is then crowned king/queen for the day.

So don’t chew too hard in this delicious pastry, and save your teeth!! 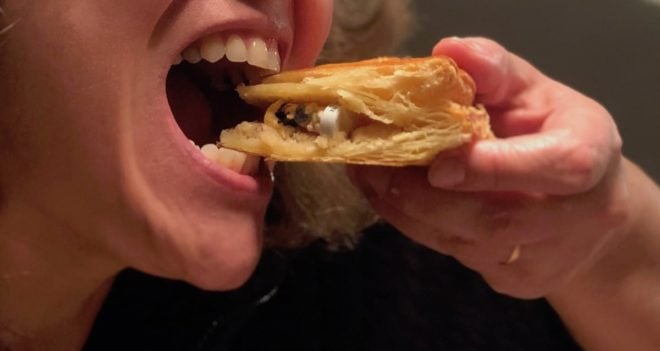 Where and When To Buy A French King Cake in France

If you are in France in January, be sure to look in the windows of bake shops, you’ll see many “fèves” – these small porcelain figures, as featured on the picture below  – on display as well as many different sorts of galettes for sale.

However the holy day is on the 6th, “les Galettes des Rois” are sold pretty much during the whole month of January – you can even find some in supermarkets in December…

The traditions around the King cake in France are still very much alive today. Typically, the youngest kid at the table will go under the table (or just close his/her eyes) and designate who gets which slice:

And the kid answers:

Of course, this is a very practical way for the grownups to make sure one of the kids gets the porcelain figurine…. Or to hide back the little token in case it sticks out of the slice (you don’t know where it is when you cut the cake…)

So, the person who finds “la fève” proclames: “J’ai la fève” (I have the fava), s/he puts one the crown, then picks someone at the table to be crowned as his king/queen, and everybody yells: “Vive le roi / Vive la reine” (long live the king / long live the queen).

The crowning is just a symbol. Nothing much happens, expect that the king or queen will wear a paper crown.

Then everybody enjoys their slice of scrumptious King cake. 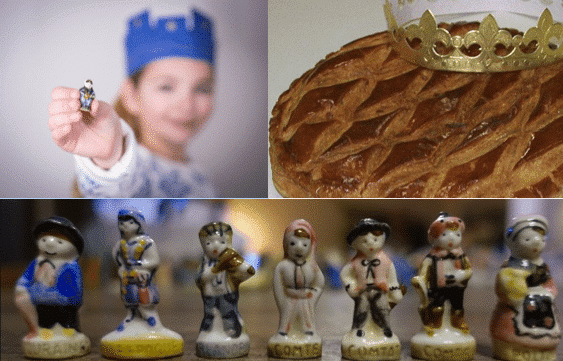 A Beautiful But Dying Tradition For The French King Cake

Another tradition asks that you cut the pie according to the number of guests plus one:

It is given to the first poor person who stops at the home.

Unfortunately, I don’t know anybody who does this nowadays however…

Here are French terms you’re likely to hear when enjoying a King’s pie in France.

Who will become king or queen for the day at your house? Bake a galette and have a little fun with the family.

Make a foil or paper crown to place atop the cake before eating it (if you buy it at a baker’s in France, they will provide the crown).

Ingredients for the French King Cake:

Preparation of the French King Cake:

1. In a food processor, purée the almond paste, sugar, butter and pinch of salt until smooth.

2. Add 1 egg, vanilla and almond extracts and purée until incorporated.

3. Add the flour and pulse to mix it in.

4. On a lightly floured surface, roll out one sheet of the puff pastry into an 11-1/2 inch square.

5. Invert an 11-inch pie plate onto the square and cut out a round shape by tracing the outline of the pie plate with the tip of a paring knife.

6. Brush the flour from both sides of the round and place it on the buttered baking sheet. Put in the refrigerator to chill.

7. Repeat the procedure with the second square of puff pastry, but leave it on the floured work surface.

8. Beat the remaining egg and brush some of it on top of the second round. Score decoratively all over the top using the tip of a paring knife and make several small slits all the way through the pastry to create steam vents.

9. Remove the first sheet from the refrigerator and brush some of the egg in a 1-inch border around the edge. Mound the almond cream in the center, spreading slightly.

10. Bury the bean in the almond cream. Place the scored round on top and press the edges together.

11. Bake the galette in the lower third of the oven for 13 to 15 minutes, until puffed and golden. Remove from oven and dust with the confectioners’ sugar.

12. Place oven rack in the upper third of the oven and return galette to cook for an additional 12 to 15 minutes or until the edge is a deep golden brown. Transfer to a rack to cool slightly.

Serve the galette warm. Make sure everybody knows about the bean so no one breaks a tooth!

If you enjoyed this article, you may also enjoy my other French food recipes, in particular Olivier’s own “crêpes” recipe with a video.

Debra Fioritto is a winner of the 2006 Culinary Trust's Julia Child Endowment Fund Scholarship and specialises in culinary travel and tours to France. She is an expert in the history, legend and lore of French cuisine and has eaten her way through most of the regions of France.