What is the difference between French from France and French from Québéc, Canadian French?

Let’s dive right in with many examples as well as a deeper analysis of the Canadian French language.

When I’m travelling in some countries, I’m often asked : “Come on, do you really speak French in Québec? Even in day to day life? Isn’t it rather folkloric?”

It is sometimes difficult to convince people that I work, shop, watch TV, listen to radio, and so on, only in French, but this is only true! Mind you, we are about 8 M people living in Québec and 80% of the population is French-speakers!

The official language in our Province (the equivalent of a State in the US) is French which is therefore work, education, administration language.

Let’s add that there are also French Canadians in other Provinces :

OK, you might think that 8 M is a tiny minority on a continent where English is the only language for more than 300 M inhabitants, but still, 8 M makes a lot of people to have a chat with… Many countries such as Sweden, Denmark, Norway, Finland have fewer inhabitants than Québec and their languages are still alive!

Plus, even if we are only 8 M in our country, still, we have contacts with the rest of “Francophonie” (the Organisation internationale de la Francophonie considers that 220 M people in the world are francophones, i.e. that they speak and write French).

You just need a crash course, a kind of “québécois 101”, and you’ll see it is not so difficult to understand people here, even if you’ve been taught French in France or with French teachers.

First of all, remember that written French (in newspapers, in official documents, etc.) is exactly the same in Québec and in France.

Otherwise, as far as the oral language is concerned, there are specificities in phonetics, vocabulary, morphology and syntax, and we’ll focus on these first three aspects here.

Of course, this is not comprehensive at all, it is just a few remarks in order to give you “le goût du Québec”.

By the way, be aware of the preposition of place de/du or à/au :

Nasal vowels are a bit different : [an] tends to be pronounced a bit like [in] in Québec.
So les parents (parents) might sound like les parrains (godfathers) for you in the beginning! (see Camille’s lesson to master French pronunciation)

“Un” is still clearly pronounced in Québec though most of French people pronounce the French nasal [un] as [in].

Pronouncing The Diphtongues in Canadian French

A is sometime pronounced ô : l’art (art) might sound like l’or (gold).
A few years ago, there was an ad about some beer : the slogan was : elle est bonne de bar en bar.
That was a play on words, since one pronounces in the same way de bord en bord (meaning totally) and de bar en bar (from one bar to another one)

Consonants such as t and d are “affriquées”, before a vowel, which means that one adds a slight s sound or z sound after them.

For example, one tends to pronounce : fatsigué (tired) or mardzi (mardi)

Here are a couple a video extract from “Les Simones” from TV5MONDEplus : this service is FREE on all devices, offers 5,000 hours of programmes, films, drama, documentaries, lifestyle and more giving everyone a real taste of “Francophonie” with hit shows from France, Belgium, Canada, Switzerland and Africa : and of course, all these programs feature real-life French, not textbook French!

This might be the most striking difference when you get to Québec, it is also the most exciting, the most interesting. Nowadays there are a lot of pocket dictionaries for tourists that one can buy at the airport or in any bookshop in Montreal.

A lot of words were created here because of the specificity of the landscape or the way of life: la poudrerie, le banc de neige, la bordée de neige…

Words Borrowed From Other Languages

Some words were taken from Amerindian languages :

French people, as you know, use a lot of English words (one speaks of anglomanie), we have also a lot of anglicisms in Québec though it is not the same ones :

Sometimes, the English word has been modified and adapter as if it was a French word, few people even know that it comes from an English word :

Nowadays, our Office de la Langue française (institution which has got a very good website) creates neologisms to ovoid anglicism (such as technological terms) :

and those new words are then adopted in France! 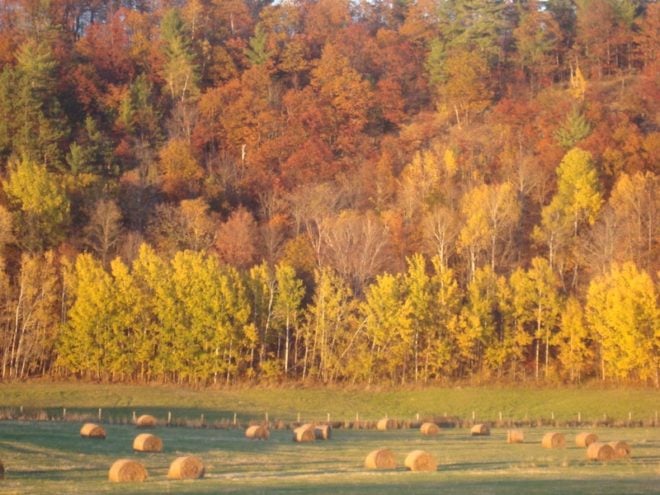 One often says this is because, luckily enough, we lie 4000 miles away from the old Académie française.

One thing which is also fascinating in québécois is the swear system.

You might not use swear words but, listening to people on the street or in cafés, you’ll be amazed by the variety and the creativity of the system.

You just need to know a few basic religious words : tabernacle, calice, , calvaire, hostie, Christ, and then, thanks to morphological creativity, you’ve got an infinity of swearwords : tabarnak, tabarouette, tabarnouche, câlic, câline, calvette, asti (astsi), crisse, and so on and so on…

One can even change the category of the word : Christ, which is originally a proper noun can become an adverb (être en crisse : to be angry) or a verb (crisse ton camp : go away!).

I chose very few examples for this first québécois 101 lesson but I tried to give you the most significant ones!

Just for the fun of speaking French in America, I think that Québec deserves to be visited.

Finally, here is a great video that will teach you some essential French Canadian expressions

Bonjour! My name is Michel and I live in Brittany and also in Canada. I will share my love of these regions with you in my articles.