Many students want to travel to France to practice their French. But this may not work. Follow my tips to pick the best destinations to speak French.

A lot of people want to enjoy a trip to France, with the idea of having a nice vacation AND practicing their French. Unfortunately, they often come back saying “As soon as I started to speak, the French would answer to me in English”.

Here is my advice on how to pick the right place to practice your French.

People in major cities tend to be busy, in a hurry, and they won’t have the time or the interest to chat with foreigners, especially those hesitating and looking for their French words.

Even in bars and restaurants, your waiters might get tired of becoming French teachers for desperate tourists – it’s not really part of their job description…

Many French people speak English in major cities, so put yourself in their shoes: when you have a job to do, a place to be, you don’t want to be rude, but you just don’t have the time!

Same reasoning here. Yes, la Provence is lovely, and that is why so many foreigners live there. So chance are you won’t be anything special in Provence… even in small villages: they see so many tourists there, it’s nothing special!

However, I promise you that someone from Alaska showing up in a small Brittany village like Jugon-Les-Lacs (where our immersion teacher Suzanne resides) will be a big deal. Actually, you may even make the local news! 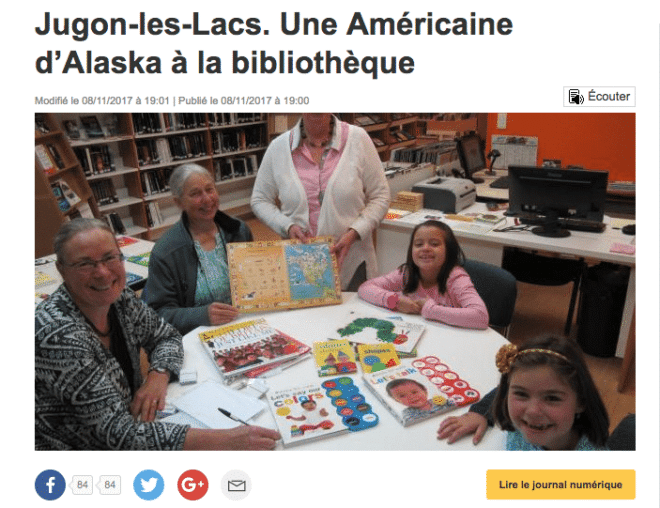 If you are considering going to France to practice your French, I strongly recommend you check out these “Immersion at a French teacher’s home programs“: French teachers who speak English if needed, will welcome you by yourself, or with a friend or your family) into their own home. You’ll have “formal” French tutoring in the morning, share meals with your teacher and family, and then enjoy time to walk around by yourself or with your teacher in the afternoon.

So make sure your expectations to practice your French with the local fits your destination.

3 – Travel to France off Peak Season

December to March is the low tourist season. Plane tickets will be cheaper, and so maybe accommodations. I can guarantee that everybody in the tourist industry will be much happier to see customers than during the rush of late Spring and Summer!

France has many, many coast lines, mountains, lakes… and is therefore a major destination for tourists. In the summer, tourists who don’t like the heat go to Brittany, the ones who love it go to Provence.

The French Mountains, like the French Pyrénées, are mostly known for skiing. So lots of tourists go there in the winter. However, much fewer people go in the summer. There are gorgeous hikes to be made, lakes: it’s a wonderful destination in the summer as well, yet one that is overlooked…

In winter, try a coffee place in a small town of the Dordogne: yes, it may rain outside, but chances are that you’ll be the only customer there and the waiter will be glad to have some company, and will be delighted to talk to you in French!

So if you are traveling to France to practice your French, this piece of advice may be the most important of all: travel to France in Winter or Early Spring!

4 – Go Off The Beaten Path to Practice Your French

I heard many tales of students going off the beaten path, to Lot-et-Garonne for example, or Belle-Ile-en-mer – a preserved island in Southern Brittany, and having the best time of their life.

In the deep French countryside, French people don’t usually speak any English and are very happy to encourage the newcomers to communicate with them in French. People are much more relaxed than in larger cities. The sense of welcome is different too: people take time for one another, and seeing a new face is interesting.

If you go to remote places in France, you’ll be truly unique: people will come to you to talk, figure out why you went there, where you come from… You may have to hop on a train or two, or rent a car. France is a safe country! Don’t hesitate to be bold and drive away into the French wilderness!!

Finally, if you can’t go to France, let France come to you: check out my downloadable French audiobooks to practice French in context. I have written and recorded many fun novels taking place in France, using simple yet truly useful vocabulary, and recording at several speeds to prepare you for modern French pronunciation.

Lots of French students want to practice their French during their vacation. However, your family may not speak French, or share your enthusiasm to visit France over and over again…

Or going to France maybe too far, too complicated… So why not try “Club Med”?

As a French organization, many people speak French there, and you’ll be surrounded by a lot of French guests. Even in Florida, or the Caribbeans…

Club med now has “family” clubs, which are kid friendly – although not everybody may agree on what is PC around kids!

The evening shows may be viewed as “too risqué” for very conservative families, so be aware that with French speaking people, you’ll also get a bit of French culture, humor, attitude…

Many places around the world speak French, like French speaking Switzerland. And people there are usually delighted when they meet foreigners who came to them to practice their French.

It may be closer to your home, so the trip will be cheaper. It may also be a destination that your whole family would enjoy – yet you’d still get to practice your French!

Of course, the accent may not be exactly the same as French spoken in France, but it’s not a problem – it’s still French! And a good practice for you.

7 – Join a Bus Tour or a French Speaking Cruise

Even when you are surrounded by French speaking people, in France, you may end up alone. It’s not easy to start a conversation in French in a coffee or a restaurant.

So why not try a French speaking bus tour, or a French cruise?

You’ll be part of a group: people will for sure talk to you, and you may be the only foreigner there.

Even if you are shy and take time to make friends, the tour guide will be speaking French – that’s a start!

This would work best if you do speak French already. At a French beginner level you may feel somewhat lost…

7 – Prefer Bed and Breakfasts to Hotels

There are many B&B in France: although the owners may speak English, they may also understand their guests want to practice their French and be more inclined to do so. Check out this site for addresses.

Finally, if you do choose to vacation in France to practice your French, don’t hesitate to clearly say you prefer speaking French.

For some reason, French people think that it is polite to speak a foreigner’s native language if they can.

They also want to practice their English.

Most of them don’t realize you actually may have come to France to practice your French, since a lot of tourists are indeed relieved when someone does speak English.

So say that you prefer speaking in French.

So say it politely, with a smile, and they should get the message. Check out my article on how to make French people speak French to you for useful sentences and more tips.

Here are some tips on how to pick the very best learning method and avoid scams.