Learn the French vacation vocabulary + French to describe your holidays in France + Vacation dates and zones in France + tips form a French native.

Vacation, in French “les vacances” (always plural), is at the heart of the French culture. 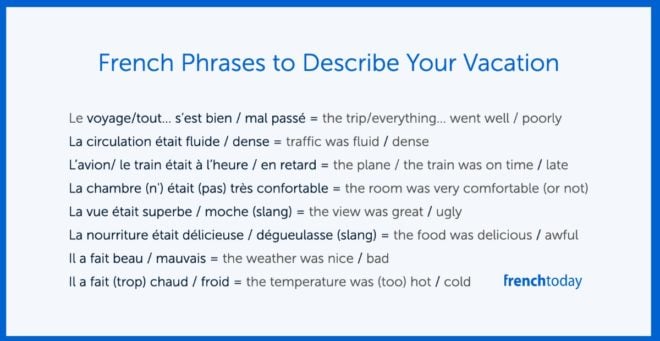 The French are known to take a lot of vacations, especially if you compare them to the Americans! But is this “five weeks of paid vacation” myth really true?

Yes it is. According to Le Journal du Net, French employees take even more vacation time than that, with an average of 37 days per year, or 5.2 weeks (in 2012). There is quite a difference between French workers: a public office manager takes an average 7.4 weeks of paid vacation, versus a farm worker/ artisan who takes 4.6 weeks.

However, it’s true that in general, the French really enjoy a lot of vacation time: don’t go to France in August and expect to do a lot of shopping! A lot of stores close in August – and actually in January as well, especially in smaller countryside towns.

The French school vacation is divided as follows:

5 – What is the French Vacation “Zone” System?

Since 1964, France is divided into “zones” to facilitate the departure of students for vacation : France is cut into three zones (A, B, C) and the vacation time spread over one month so that there is enough room for everybody in the ski stations! I am NOT kidding…

So now, every single French household with kids has to check out this map to know which zone they now belong to, and when the vacation for their kid is going to be. And forget about meeting your Parisians cousins for the vacation if you live in Brittany… you are not in the same zone, which means you won’t have the same vacation date.

Of course, as soon as you hit the vacation starting / ending dates, France is in a gridlock. We call them: “les journées noires” (black days) and you should not plan on driving during these days if you don’t want to be stuck in endless traffic-jams (“les embouteillages”, “les bouchons”).

Train and plane tickets, room prices, all goes up as well.

So it’s a good thing to know about the French school vacation dates before you plan your next trip to France!

Lots of French students want to practice their French during their vacation. It’s a good idea, however:

However, your family may not speak French, or share your enthusiasm to visit France over and over again… Or going to France maybe too far, too complicated… So why not try “Club Med”?

As a French organization, many people speak French there, and you’ll be surrounded by a lot of French guests. Even in Florida, or the Caribbeans…

Club med now has “family” clubs, which are kid friendly – although not everybody may agree on what is PC around kids! The evening shows may be viewed as “too risqué” for very conservative families, so be aware that with French speaking people, you’ll also get a bit of French culture, humor, attitude…

This is more tricky than it sounds. First, you have to memorize that the French word for vacation is always plural: les vacances, mes vacances, des vacances… The verb and adjectives will also have to be plural to match “les vacances”.

Then, to ask “how was your vacation” (or rather how were your vacations in French…) we don’t use the same construction.

Or you can use a statement and turn it into an informal question:

I suggest you pick one and learn it by heart to use it yourself, but you need to know the three formulas because they are very, very common in French.

Of course, one can get creative and say: “tes/vos vacances, c’était bien ?”. It’s much simpler, but less used in French!

Here again, you have to watch out to keep your answer in the plural.

Your answer usually “matches” the formality of the question, but it’s not set in stones.

10 – How to say Where You Went / Are Going on Vacation in French?

In the past, both form their passé-composé with “être”:

In the future, we tend to use the near future construction:

Then, what follows get complicated… I’ll sum it up here, but read my articles to know more about the French prepositions of place and how to say the date in French.

Voilà, I hope this is helpful. To learn more about French vacation vocabulary, the best is to learn in context: I suggest you check out my “Une Semaine à Paris” and “Une Semaine à Paimpol” downloadable French audiobooks, featuring: