May Traditions in France

By Camille Chevalier-Karfis
Updated: May 1, 2022

Learn about the long weekends of May in France and the meaning of “faire le pont” and discover a charming French tradition involving lily-of-the-valley.

Traveling in May in France is usually a bit complicated. We have many French holidays, and many extended weekends since the French “font le pont” – they will take an extra day off when there is only one day separating a holiday from a weekend, and therefore have a “long weekend”.

We also have a strange French tradition for May 1st…

Table of Contents
May 1st : Labor Day, May Day and Lily of the valley day in France
20 Useful Words & Phrases in May in France
Mai Traditions in France Video
Lily-of-the-valley With Coronavirus
May Holidays in France
What Does “Faire le Pont” Mean in French?
Watch Out For Extended May Weekends in France

May 1st : Labor Day, May Day and Lily of the valley day in France

May 1st is Labor Day in France. So it’s a holiday, and people don’t work and most shops are closed.

Well, most people give a bunch, a small bouquet, or a live plant that you can then plant in your garden. It’s now fashionable to also mix a couple of stands of lily of the valley with a rose…

When I was much younger, kids would go pick some in the woods, and sell them on the streets. On that day, everybody is allowed to sell lily-of-the-valley anywhere, even door-to-door, without any kind of permit. It’s called “la vente à sauvette” – selling on the run – and nowadays lots of people still do it – but the flower is usually bought and sold with a profit with flower growers. 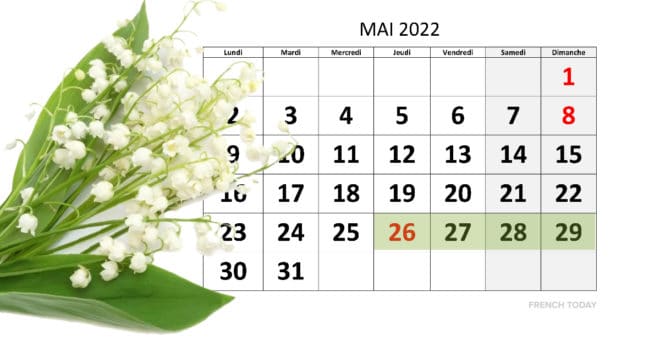 20 Useful Words & Phrases in May in France

If you are in France in the month of my, this vocabulary will come in handy!

A neighbour of mine kindly gave me access to his garden in Paimpol, Brittany so I could film this video. You can turn the subtitles in French (checked by me) and English with the CC option located to the bottom right of the video (CC and gear).

Could you understand me? I’d love to know what you think: please leave a comment!

Unfortunately, traditions worldwide have been quite disturbed by the Covid 19 crisis. So what’s going to happen in May 2021 in France?

In 2021, selling in the street was allowed with people respecting the safety gestures. You could also get lily-of-the-valley in the supermarkets, and the speciality stores which were opened: it’s the case for flower shops and plant nurseries.

May Holidays in France

There are many holidays in May in France:

What Does “Faire le Pont” Mean in French?

Now all these wouldn’t be too bad if the French didn’t have this habit of “faire le pont” – literally “to do the bridge.”

“Faire le pont” means that when a holiday is on a Tuesday or a Thursday, the day which links over to the the weekend is also off for the employees (who still get paid).

So for example, Leyla’s school will be closed on Thursday the 26th for l’Ascension, and Friday the 27th because… well because they can. The teachers and kids will enjoy a four day weekend.

This affects schools (read more about the French school system here) and other institutions including banks, museums, most offices, small boutiques. Most supermarkets are open but only for a few hours. You can imagine that the month of May is not a good one for the French economy… 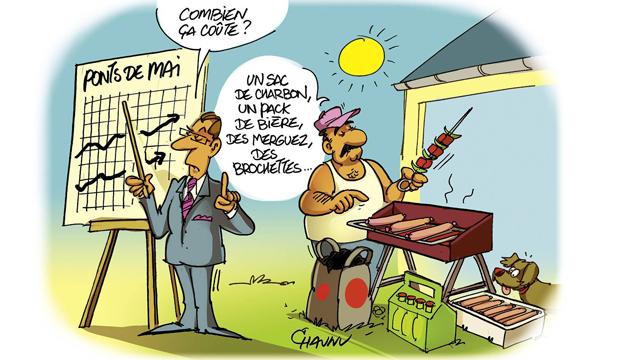 “how much does it cost? (to the economy)“
“A bag of coal, a pack of beer, lamb sausages, skewers…”
Image credits: Ouest France

Watch Out For Extended May Weekends in France

Of course “les ponts du mois de mai” have a tremendous influence on the price of train tickets and the traffic on the roads. You can count on major traffic jams!

In order to learn about French culture and French language in context, check out my downloadable French audiobooks, featuring different speeds of recording and enunciation, and focussing on today’s modern glided pronunciation, exclusively on sale on French Today.