🚕 How to Get a Taxi in Paris + French Vocabulary 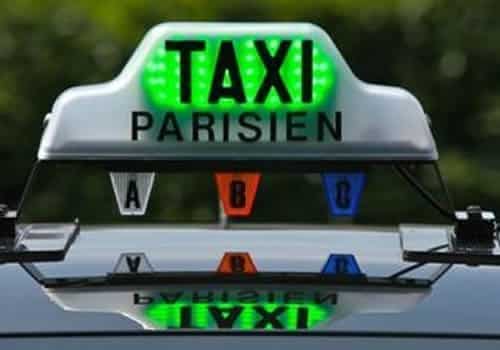 In Paris, there are about 16,500 taxis so you would think you could get one easily, no? Nope! Paris’ cabs usually don’t stop when hailed. Why? Because of the whole taxi organisation in Paris.

Table of Contents
1 – The World of Taxi in Paris has Changed Thanks to Uber
2 – Why Taxis in Paris Won’t Stop When Hailed
3 – How to Get a Taxi in Paris?
4 – Taxi Fares in Paris and Hidden Charges
5 – The Elusive “Waiting” Charge
6 – What About a Child Car Seat in Paris?
7 – Are Pets Allowed in Taxi in Paris?
8 – Beware of Private Limo Drivers Scam in Paris
9 – How to Tip a French Taxi Driver
10 – French Taxi Phrases

I first published this article in 2012… Since then, taxis in Paris have changed quite a lot because of Uber, a web based taxi service.

There were many anti Uber demonstrations in Paris in 2015 – and as a result the UberPOP service was forbidden, but NOT the regular Uber service.

Uber broke what was a real monopoly in Paris, forcing the other Parisian taxis to be more polite, on time, and overall much more reliable.

What follows is still accurate for the other Parisians taxis companies, so you may find it useful. If you are an Uber user and just want to access the French taxi vocabulary list, you may want to skip to the end of this article :-)

2 – Why Taxis in Paris Won’t Stop When Hailed

A taxi is not allowed to stop:

So, when you want to get a taxi, your first move should be to look for a taxi stand: they are around, all 740 of them, so you should always ask your hotel “Où se trouve la station de taxi la plus proche?” (Where is the nearest taxi stand?).

Taxi stands in Paris are signaled by a blue square sign on which is written “taxis” and some have some sort of a phone.

Click to view an interactive map of Taxi Stands

Some stands are bigger than others, and on rainy Saturday nights, even a big stand may not have available cabs…

Some have a phone you can use to call another nearby station: if there is an available cab there, the driver may pick up the phone and come pick you up at the station you are calling from.

You can also try calling 01 45 30 30 30: you will then have to select your “arrondissement” and closest station. Then the phone of the station will ring, and you may possibly talk to a driver.

Another way to get a taxi is to book one in advance. Many companies (les taxis parisiens, les taxis G7) offer online booking, or booking over the phone. They even have smartphone applications, and their operators usually speak English (or you can ask to be transferred to someone who does).

I personally use les taxis G7, and find them quite reliable, especially on long rides like (such as going to the airport)… But it can be pricey: check out the hidden charges below! (Although, things are changing here again: March 1st 2016, a flat fee rate to/from Paris airports has been put in place: if you’re travelling from the CDG airport, you’ll pay €55 for a trip to the Left Bank and €50 for the Right Bank. If you’re coming in from Orly, it will be €30 for the Left Bank and €35 for the Right Bank.)

But beware of hidden charges: 1 Euro extra per piece of luggage or bulky items (like a stroller, but no charge for wheelchair), 3 Euros for the 4th passenger… and a minimum fare of 6.20 Euros.

But mostly, you should be aware of the “waiting” charge, especially when you call in a cab: the driver is allowed to turn on the meter when he leaves to meet you, so expect a few extra Euros on the meter when the taxi arrives.

However, that can become quite a large sum if you book a taxi in the morning and the driver trips the meter leaving home in the suburbs…  I have seen as much 20€ or more already on the meter when I get into the car…

Unfortunately, there is nothing much you can do about this… if you don’t want to risk it, go and wait at a taxi stand…

6 – What About a Child Car Seat in Paris?

You’d better bring your own! If you book your taxi in advance, you may ask for a car seat; some companies provide one.

But although it’s the law in France that babies/ children must ride in an appropriate car seat, taxis usually don’t have seats in their trunks, and they won’t care that you are traveling with your child on your lap.

7 – Are Pets Allowed in Taxi in Paris?

Usually, it’s not a problem for small dogs. Allowing a bigger dog is at the driver’s discretion.

They will tell you they charge the same as a regular taxi, but it is not true. They charge more, and it is not legal.

It’s not usually dangerous per se, just not a good idea… Some of them are private limo drivers, others are simply plain drivers, with no taxi license whatsoever and often no particular taxi insurance…

Don’t encourage that illegal business practice, and go to the taxi line like everybody else :-)

9 – How to Tip a French Taxi Driver

It is not compulsory, but sort of expected. It’s customary in France to tip your taxi driver.

I usually leave one euro when the drive is about 10 Euros, and 2 or 3 Euros when it’s around 50 Euros.

But if you feel you had a helpful/ courteous driver, larger tips are always appreciated!

If you enjoyed this article, you may also like: