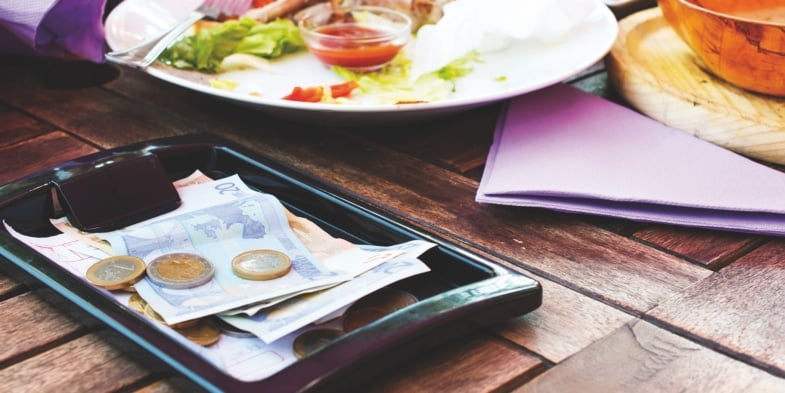 How do you handle paying for the bill at a restaurant in France, among French friends? Here is a list of French expressions we use to make clear who is going to pay, as well as cultural tips.

There is much to say about French table etiquette, and I wrote many articles on this blog about this subject.

However, I believe the way French people address the bill at a restaurant requested a bit of attention.

Table of Contents
1 – Don’t Talk About Money in France
2 – Do Fight to Pay the Bill
3 – Be Precise About Your Invitation
4 – Yet Sometimes, French People do Share the Bill
5 – Do Offer to Invite a Frenchwoman

1 – Don’t Talk About Money in France

Talking about money is considered vulgar by French people, so we don’t like to share the bill at the end of a meal.

It’s part of our French politeness to take turn treating friends, and we kind of keep track mentally of who hosted last, who paid for a restaurant etc…

This is especially true if the party is only two people or two couples.

Friends can say it up front:

Or, just grab the bill when it arrives. Friends often argue on who will pay the bill, meaning everybody argues that they want to pay the whole bill.

Who is going to pay the bill among French friends is often settled by:

3 – Be Precise About Your Invitation

Be aware of the difference between:

In both cases, it’s unclear on who is paying.

These are not rule set in stone. Of course, sometimes French people will share the bill.

Larger tables, younger crowds, friends getting together several times per week, and of course co-workers will tend to share the bill.

In that case, we just say:

Or the person putting the amount together will ask for it

However, we will seldom go into discussing precisely who had exactly what to calculate exactly how much one should pay. We wing it, round it up…

5 – Do Offer to Invite a Frenchwoman

Now, if you are a man having lunch or dinner (it can be just as friends: it’s not because you have dinner with a woman in France that it’s “a date“), French customs dictate that you pay for her.

This is an old habit though, and the woman could insist that she’d like to pay her part, or even treat her male friend… but let’s say that it is expected for the man to offer, and to insist a bit, even if he could possibly concede at the end.

Some – usually older – men would not have it. I sneaked on my Dad once and pretexted to go to the bathroom but instead went to pay for lunch directly at the register in a kind of fancy restaurant. My Dad was really mad, and made me promise I would never do it again!

If you enjoyed this article, I recommend you read “how to comment about food in French” and “what about “le” French doggy bag?”