How to Cut A Single Serving of French Cheese 🧀

So many rules… Most make sense though since how you cut the cheese has to do with leaving a decent serving for the next person, and then leaving the cheese in the best shape to keep it.
Here is my exclusive (and technical!!) article on how to cut cheese in France.

Joke aside, cutting “le fromage” is really not an easy task, and there is a big polemic among French people on the proper way to do it…

1 – The Logic Behind How the French Cut Cheese

There is a reason to the way French people cut their cheese: it is necessary to ensure a fair distribution between the rind and the dough.

The taste is usually stronger next to the rind, and you also want to be polite and leave some dough for everybody. In many French cheeses, you don’t eat the rind – not that it’s toxic, but it might be very strong in taste, or too hard to bite into.

Future storage of the remaining cheese is also taken into consideration.

Most French methods about cutting cheese show you how to cut the whole cheese (as for serving it in a buffet for example).

In a restaurant, the waiter will usually cut the cheeses for you, so no worries there.

But the really hard part is knowing how to help yourself to a single serving of cheese when you are presented with a whole selection, at a friend’s house for example.

This might be the case for people traveling in immersion in France.

In this case, you will just cut one cheese serving, for yourself, and that’s when – if you don’t know how to “couper le fromage”, you could make a big faux-pas, and ruin the plateau de fromages! 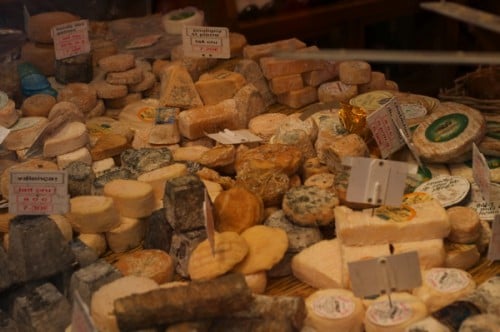 If you are hosting, you should also present your “plateau de fromages” with several knives, so you don’t use the same knife to cut a mild cheese and a roquefort… If there is only one knife, you may use your piece of bread to wipe it clean before you cut another cheese.

Quality cheese is somewhat of an expensive dish in France. It should be offered only once (i.e. you don’t ask for seconds) and people should take only what they can eat.

If you pig out on “le plateau de fromages”, the hostess might be under the impression she didn’t feed you enough during the meal.

In other words, cheese is a delicacy, not a main course. (And then, of course, everybody does what they want in their own home.

I like cheese, so as featured in my intermediate level audio novel “Une Semaine à Paris”, I often do “un dîner de fromages”, with a good bottle of wine, and fruits and nuts, and fresh baguette of course !!).

4 – How to Politely Eat Cheese

In a French meal, it’s likely that cheese will be offered. Usually not only one, but a carefully planned selection which we call “un plateau de fromage”.

Eating cheese properly in France is not easy: you should use your knife and bread only, and never touch the cheese with your hands. No fork either.

Once the portion of cheese is in your plate, cut a smaller piece with your knife, place it (still with the knife) on a small piece of bread you have just torn away from your bread slice, and balance the cheese on the bread till it reaches your mouth.

Put both cheese and bread at the same time in your mouth: the whole thing should be small enough for you to be able to chew gracefully :-)

The hostess may have provided several serving knives for each cheese, but it’s rather unlikely. Most people only use one serving knife.

After you are done serving yourself, gently scrape the serving knife against the side of your plate or a small piece of bread to remove any cheese left on it: you wouldn’t want the next person cutting a mild goat cheese with a knife full of Roquefort!

To store the cheese, put the cheese back in its own wrapper (or box), or change wrapper, so the smell of a stronger cheese doesn’t affect a milder one.

Keep the cheeses in the bottom of the fridge, in the vegetable drawer, which is the coldest and most humid part of the fridge. Or better keep it in a cold cellar – French cheese expert would say it’s “sacrilège” to put cheese in the fridge since it stops its maturation… But if you don’t have a cold cellar handy, and don’t want your camembert running miles away, the fridge will have to do!

Soft rind cheeses (Camembert, Brie) and washed rind cheeses (Munster, Livarot) can be kept out of the fridge for 2 to 3 days if they are at their best, as long as they are left in their packaging and wrapped in a humid cloth.

Take the cheeses out of the fridge at least one hour before serving and prepare your cheese platter in advance. A cheese which is too cold will lose a big part of its flavor.

Do you know why round French cheese (such as Camembert) come in a round wood box?

It’s to store the open cheese (you may also put the box in the oven to serve a warm cheese – very practical :-)

If you still have a minimum of half a cheese left, then put it back in its wooden box and keep the box on its side, with the open part of the cheese up. It will prevent the cheese from running out of its rind.

Actually, it will run a bit, but inside the rind, so when you serve it again, just cut the excess of rind and you’ll have a decent looking cheese.

To store and to serve cheese, “une cloche à fromage” is also useful: it will keep insects and odors away when serving on the table. Here is the picture of a modern convenient one, but you have some very pretty ones made of glass, over a wooden board… 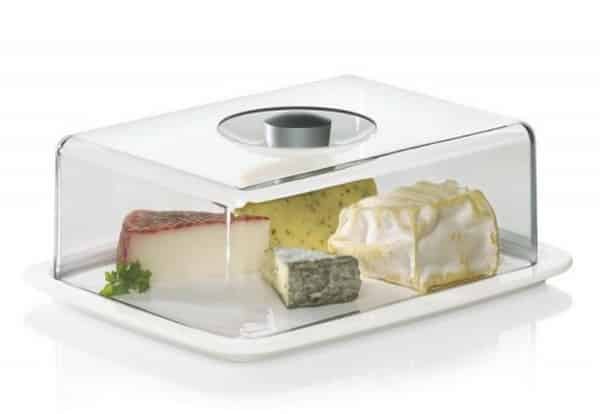 You should cut these French cheeses like you would cut a round cake, into triangle shape portions.

7 – How to Cut Large Size French Round Cheese (Brie…)

They are presented whole or in portions (triangle).

It’s pretty rare that someone will serve a whole brie cheese (it’s big). But if they do, then cut it like you would a pie. You’ll have a long, thin piece. If it’s too much for one serving. you may cut it in two and leave the half for the another guest…

If you get a portion of the cheese – much more common, you should follow this technique: 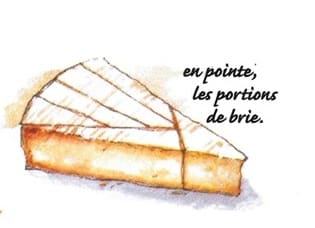 Again, cut it like a cake, but this time all the way through the height of the cheese.

Cut it like a cake, starting with a diagonal cut, which gives two triangles, then cut each triangle in half and so on (it then leads to 4, 8 or 16 equal parts). If you are only helping yourself, you can do the math and start from the middle of the cheese, and cut just a slice…

Some people cut the cheese in half, then the half in half again so you have a square, then do parallel slices… I don’t like this one much because one of the slices will have all the rind, and also because if you have any left overs, it will be very hard to store.

There is however another technique and its use has to do with storage.

With that cut, the dough will be contained inside the rind, and won’t run.

The flavors are concentrated in the marbling.

Blue cheese cut into slices (Roquefort) should be laid flat, and cut into parallel slices, starting on the core side.

Then you can cut smaller portions in a diagonal kind of way (see picture).

It’s likely this cheese will not make neat servings, and will crumble a bit anyway…

The cylindrical blue cheeses (Fourme d’Ambert) are cut like a pie. 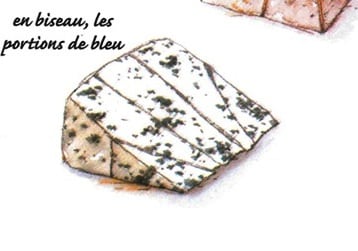 Simply cut your French log cheese in parallel slices, first removing the end part if need be (so you don’t get all the rind).

In the case of Sainte-Maure de Touraine, you should first remove the straw to avoid breaking the slices!

The cheese should be considered 2 parts: the core (close to the center of the wheel) and the rind (the part farther from it).

You start on the core end, by cutting long slices parallel to the rind (so it’s mostly dough, with 2 small rind parts on each end). If the long slice is too big, you may cut it into 2.

Then, at about mid-cheese, you change technique: you cut perpendicularly to the rind (so no-one is left at the end with only a piece of rind…) – see the main picture of this article for a good photo.

They can simply be broken or cut into shavings with a vegetable peeler.

It can be served warm or cold.

If it’s cold and not very ripe, you may be able to cut it like a pie with a knife.

But if it’s warm or quite ripe (and then very runny inside) you should serve it… with a spoon!!

You may eat the rind or not, it’s up to your own taste.

I bet you never thought there would be such a list of techniques ;-)

Most of these French cheese images are copyright of produits-laitiers.com, the official site of dairy products in France…