June 6th is a pretty special day.  It’s the anniversary of D-Day and as both a French and US citizen, it definitely has double the impact on me.

Camille and I live about 2.5 hours away from Omaha Beach and I have been there several times in the last 10 years. We also often pass by this area on our way to Paris by car and driving past city signs like “Arromanches”, ‘Carentan” or “Ouistreham” always gives me goosebumps.

First, let me tell you about some French D-day related vocabulary. Then, I’ll share my own experience of visiting the Normandy beaches with my best friend Kane.

Camille wrote an entire article about the French War Vocabulary – I suggest you check it out for additional vocabulary.

D-Day (and the war in general) is still very present in everyday life in this area of France.  There are many museums and monuments/memorial statues everywhere.

If you go eat at a restaurant along the coast of Normandy, there will often be a wall filled of pictures of veterans having dined there while attending a previous year’s celebration but mostly, you’ll still see many German bunkers along the coast line.

The last time I went to visit the memorials was a few years back when I took my best friend Kane there.

My friend is American and comes from a family of military men.  As it happens, both his grandfathers were there on D-Day and, thankfully, both survived the mission. 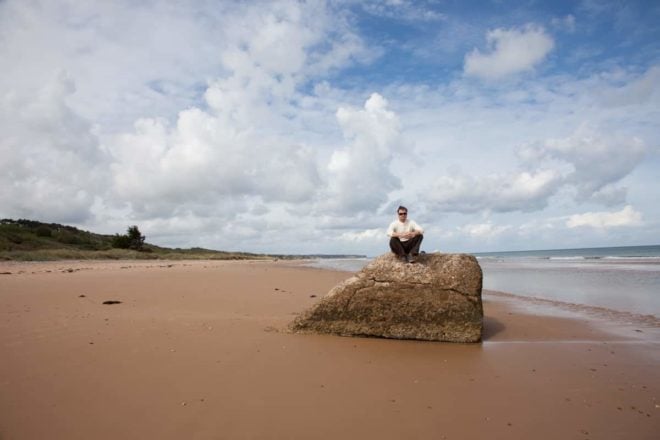 His maternal grandfather was John Donoho Scott, already a Pearl Harbor Survivor, Quarter Master, 1st Class assigned to the USS Diver, a salvage ship tasked with ferrying and placing components of the artificial harbors called “Mulberry A and B” (http://en.wikipedia.org/wiki/Mulberry_harbour) that allowed the allied forces to deploy vehicles and supplies after the invasion at Omaha and Gold Beaches.

Kane’s paternal grandfather was Marvin William Flora, 1st Lieutenant, 5th Field Artillery Regiment, 1st Infantry Division (a.k.a  The Big Red One).  He was deployed as a ‘Forward Observer’ and this role is as heroic as you can make it.  Forward Observers run up with their infantry guys and call back the positions of pillboxes, enemy artillery and other major threats to the rest of his Regiment to target with field artillery.

Unfortunately, all of his Regiment’s artillery got swamped and sunk due to weather conditions and the steep ramps of the landing boats.  He still made it ashore and resumed responsibilities of a Forward Observer by radioing target positions to Navy gunships.

It was obviously a very emotional visit for my friend and I was honored to be there for him and share his experience.

On that day, we visited both the main memorial (at Omaha Beach) and the memorial at Pointe du Hoc.

The Normandy American Cemetery and Memorial is a sobering site.  It’s at the same time very moving and sad but, strangely, also very peaceful and understated.

There is an underground museum that is very well done, as well as several very interesting (and imposing) maps of the mission timeline probably 4 to 5 meters high. Going further towards the cliff, there is an orientation table that overlooks the beach and depicts the landings.

One of the things that is hard to get a sense of unless you go there is how steep it is to go from the beach to the top of the cliff… It takes a while and is a bit exhausting when you are just taking a stroll, I can not fathom how our boys did it while under heavy fire and with all the barbed wires and all blocking their way…

Pointe Du Hoc is a prominent cliff that is the highest point between Utah Beach and Omaha Beach and as such was very heavily fortified and armed by the Germans. There were massive artillery there that could be used against the Allied forces ships and so on D-Day, the United States Army Ranger Assault Group (carried by British landing crafts) landed on the tiny little beach in front of it and climbed the 100ft cliff to capture it.

Today, this site is unreal… The original bunkers and mangled rebar are still there as well as craters the size of trucks everywhere that were created by the shells shot from the Allied destroyers. Overlooking the cliff, it’s absolutely incomprehensible how these men were able to climb up this cliff with just ropes and courage.

Today, we honor Quarter Master Scott and 1st Lieutenant Flora and the rest of the Allied forces (not just the Americans) who selflessly and bravely fought on that crucial day in history.  Thank you in French is merci: alors merci, merci du fond du coeur.

If you liked this article, you may also find French Today’s article about the French War Vocabulary useful.