“Mais où sont les croissants ?” In this article, we’ll see what French kids and people really eat for breakfast in France everyday, and study the French vocabulary for “le petit-déjeuner”.

Breakfast is called “le petit-déjeuner” in France, or “p’tit dej'” in modern spoken French, and in France, it’s usually a rather light meal.

In most French home, you’d be offered some French bread product, with a choice of jams, honey and butter, and a hot beverage such as coffee or tea.

In the countryside, people love to make jam, and will proudly open one of their – often cherished – jar for you when you visit. You may even go back home with one jar or two if the year was especially bountiful!

If there are kids around, there may be cereals. Some adults eat them as well but it’s kind of a newer trend.

We don’t typically eat eggs, cold-cuts nor drink juices or eat fruits or cheese for breakfast in France. But of course, all this changes with the influences of trends and personal preferences – it’s always difficult to write on what’s “typical”: of course, nowadays many people eat… whatever they feel like eating for breakfast!

2 – Coffee and the French Breakfast

At breakfast, the French still use instant coffee such as Nescafé, although more and more people are enjoying espresso at home thanks to the the successful Nespresso machines and the likes.

Brewing a large pot of coffee is not very common in French homes.

I talked about all the different kind of coffees, and how to order your preferred kind of coffee in France in the story of my Upper Intermediate French learning audiobook method (L6). The vocabulary will stick with you longer when you learn it in context, and with audio!

Seriously, I don’t know where this image of the French always drinking a very large bowl of coffee with milk for breakfast – even kids – comes from.

Many French people prefer their coffee short and black, espresso style, and drink it in “une petite tasse à café” – a very small coffee cup. This may be changing though with Starbucks being so popular in large cities…

There is something called “la chicorée”, which you drink in a large bowl, and it’s a very common breakfast drink in the North of France. But it’s not that common throughout France, especially among younger people. I think the stereotype may date back to WW2 when coffee was scarce and people drank “chicorée” more….

These big bowls are kind of retro and they are fashionable and many people have them at home, so I’m sure some people use a these big bowls to drink coffee or tea at home, or eat their cereals.

Kids don’t drink coffee in France, nor should they. So this isn’t a typical French kid breakfast drink either.

4 – What a Typical French Breakfast for Kids?

It’s not “croissants” everyday at home!!

During school days, it’s unlikely there is going to be fresh baguette for breakfast at 7AM! Since the baguette doesn’t keep, if there is some left over from the previous day, then you may grill it and use it as a toast.

There might be a longer lasting sort of bread at home, like “un pain rond” that keeps for a couple of days. A lot of French people in the countryside also make their own bread.

Most likely, the kids will eat American style sandwich bread, toasted, then add butter and jam and make “une tartine”.

If the house is out of bread, then the French always have “des biscottes” just in case!

A French kid would drink a cold glass of milk, or a cold or hot cocoa (remember “shocola sho”). Nesquik is very popular (although we only have the chocolate flavor one, not the strawberry kind!)

And of course cereals are a big hit with French kids. Pretty much the same cereals as in the US, with less choice, and usually a bit less sugar… Cheerios, Rice Crispies, Chocapic…

No peanut butter and jelly in France. It’s now possible to find peanut butter (du beurre de cacahuètes) in all the major supermarkets, but it’s more to cook Asian food than to use as PB&J.

5 – What is A Typical French Breakfast For Adults?

At home, pretty much the same thing as a kid, with coffee of course.

Many French people in larger cities enjoy having their breakfast in “un café”. They may even indulge in “un café noir et un croissant” every day!

Then, let’s talk about the French breakfast habits.

Although we seldom use that word, “cocoa” is “cacao” in French. “Une noix de coco” is a coconut, so if you ask for “coco” in France, the French are going to think you want a coconut, and be quite confused!

8 – How do You Say Breakfast in French?

The verb we use to say to have breakfast is “prendre son petit-déjeuner”.

But it’s common to use “petit-déjeuner” as a verb, in a more relaxed setting. It’s not in the dictionary, so it’s not correct French, but I say it all the time in Spoken French!

9 – What is the French Word for Brunch?

Brunch used to be an unknown concept in France. It’s no longer the case. Actually, going out for brunch is quite trendy nowadays… I don’t know that French people would go as far as inviting people over for brunch though!

In any case, there is no French word for brunch. So we say “le brunch”.

10 – When do You Eat Croissants in France?

As I said, it’s common for French people to have a croissant for breakfast in a coffee place. Adults walking to work may also buy a croissant on the go at “la boulangerie”, which is also true for kids walking to school.

At home, croissants or more of a weekend / special occasion breakfast food. You will see lines at the bakeries on Sunday morning… The Sunday croissant is a French guilty pleasure!

All these French bread speciality don’t keep: they have to be bought fresh and eaten right away for them to be crispy, so if you want to eat a croissant, you first have to go out to the bakery and get it! Hence the fact that we don’t always eat croissants at home (and maybe also because they are so rich…. yet so yummy… it’s not fair).

Croissant, pains au chocolat and the likes are also a common after school snack, which French kids eat when they get out of school.

But “le goûter” in France is yet another subject! 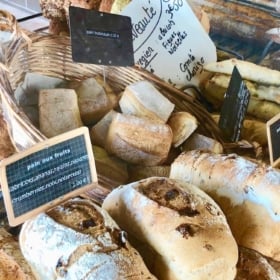