How I left France and my cozy $6,000 Per month job for the American Dream

In this personal blog post, I will detail the story behind my online bakery store Pastreez, and how I left France to California to live the American dream!

Hi guys! I’m Anthony, the founder of Pastreez, a French bakery where you can buy macarons online.

If someone would have told me back in 2016, I would have not believed it. I left everything in France back then. I left an amazing “career” and path to “success”.

I came to the United States with my wife and two pieces of luggage, in February 2017. It sounds cliché, but it’s true.

Here is how it all began…

I feel light and free. Free to think, to travel, free to be me. That’s how I felt on August 31st, 2016, my last day at EDF (Electricité de France, the big French Electricity Company), in Saint-Denis de la Réunion.

I remember back then, I was working at this big French company. Life was good. I was getting paid $6,000 per month and had just been promoted to engineer in chief, in charge of 3 teams and 45 persons throughout the island.

EDF even paid top dollars to transfer my wife and me from Martinique to La Réunion. Paid house. Paid travels. 15 months bonus salary over 4 years.

But something was not right. To be fair though, I always thought I would do my “own business” at some point. I just did not know when and how.

I always told myself this position in La Réunion will be the last one before entrepreneurship. Four more years, then I quit!

But I lasted only one year. I was lying to my true self for too long, so I decided to quit in April 2016. Yay!

I wish it would be that easy. But the reality is way more stressful and intense. No one ever leaves EDF. Understand, very good health benefits, a job position guaranteed until retirement, and much more.

The human resources director was not even aware of what to do. So I had to talk and explain myself, for months, to every single person in the company.

Even to my parents! Understand, in France, the culture is not to take risks. Once you do 5 years in engineering school and have a great job, French education pushes students to embrace a corporate career.

Even in society itself, it is very (very) hard to be an entrepreneur in France. So many barriers.

Yet, I had to tell my parents that not only was I leaving my “safety” job, but I was going to leave the country for the United States. Ouch!

Most of all, I had to convince my wife to jump on this journey with me.

After all the talk, and the negotiations with EDF, long story short, my wife and I left La Réunion island in September 2016 for Paris.

Filled up with motivation and courage when I landed in Paris, I was ready for anything.

But wait. Ready for what? I did not know at the time. All I knew was that I wanted to build an eCommerce store because I love digital marketing.

Leaving my “boring” job, I should focus only on what I love. That’s the idea.

But I know that you can’t succeed alone. You can’t have all the skills for yourself. You can’t be an expert in everything.

Naturally, I asked my wife what she loved to do. She said baking. And I knew that for a fact!

Since I met her in 2010, I could tell she was skilled and most of all passionate about baking French pastries.

Voilà! Let’s combine our skills to build something. But Pastreez wasn’t there yet.

First, we need to do a quick market study to know what area would be worth digging into. And where!

While my wife was perfecting her baking skills at Le Cordon Bleu Paris Pastry School, I was checking on the pastries market worldwide. 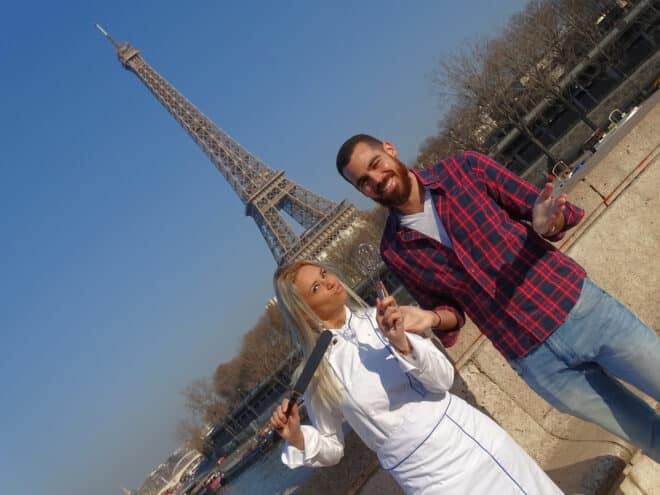 I knew my ultimate dream was California. My wife and I spent our honeymoon there in 2013.

But at the time, I thought it was too complicated to go to the United States. And that was a psychological barrier.

The problem is that society is full of people that discourage you. “You need at least $150,000 to be able to come to the US”; “It’s not your language you won’t succeed”; “You know nothing about the market”.

So much that at first, we were going to… Chile!

Why? Because they were very welcoming to French entrepreneurs. It was that simple!

But on a Sunday evening in Paris, I was watching a famous TV show called “Capital”. It was about French people that succeeded in the US…

No way! We will go to California and see how it goes.

We are ready to board our flight to California. Two pieces of luggage are on the plane’s hold. All our life at this point.

We landed in Los Angeles on a rainy evening. The Airbnb host’s name is Lane. It turns out she was a very nice lady who helped us a lot later on.

In Los Angeles, my idea was simple. Discover the area and see if there is a market for famous French pastries. At that time, I didn’t even know macarons were such a big deal abroad!

So we started meeting people on an app called MeetUp. We would prepare pastries (dacquoise, macarons, Tarte Tatin, etc.) and would bring them for free at these meetings.

We only required some feedback. And macarons were always a hit. There we go: we would build Pastreez with macarons!

While building the foundations of Pastreez, I noticed there were no blogs that answered common questions about macarons. Questions like what is a macaron? Are macarons gluten free? You name it.

With our French expertise and experience, I was able to build a strong blog around macarons, answering all these questions to help our audience.

From our small Airbnb room and shared bathroom, we were dedicated to making it work. The next step in our journey would be to test our product on a small scale.

I thought local farmers’ markets were the most efficient to do that! So we attended three of them: Newport Beach, Costa Mesa, and Malibu.

I wanted to present our idea and product to real customers. You got my pattern, right? Test, get feedback, apply and repeat!

Needless to say that people were in love with our handcrafted macarons. What I wanted the most was feedback on macaron flavors.

We learned that salted caramel, chocolate, vanilla, and Pistachio were the most popular ones.

I learned something else while interacting with people at the markets. Someone named Kevin mentioned it would be cool to have on our website a way to build your own macaron set, with only someone’s favorite flavors.

That’s how I created our website with the option to customize your own set online. That feature is to this date the most important of our website!

From this point, an interesting phase started: the growing phase.

I wanted this post to be easy to read, so I wrote it in two parts. Stay tuned for part 2!